This is my first proper play of Ganesha Games Power Legion Superhero combat game.  The game was not balanced on points but the dice went a long way to bringing it back into balance.
The forces were made up of the heroes, Captain America, Wasp and Hawkeye against the villains, Dreadknight, Black Knight and Melter. 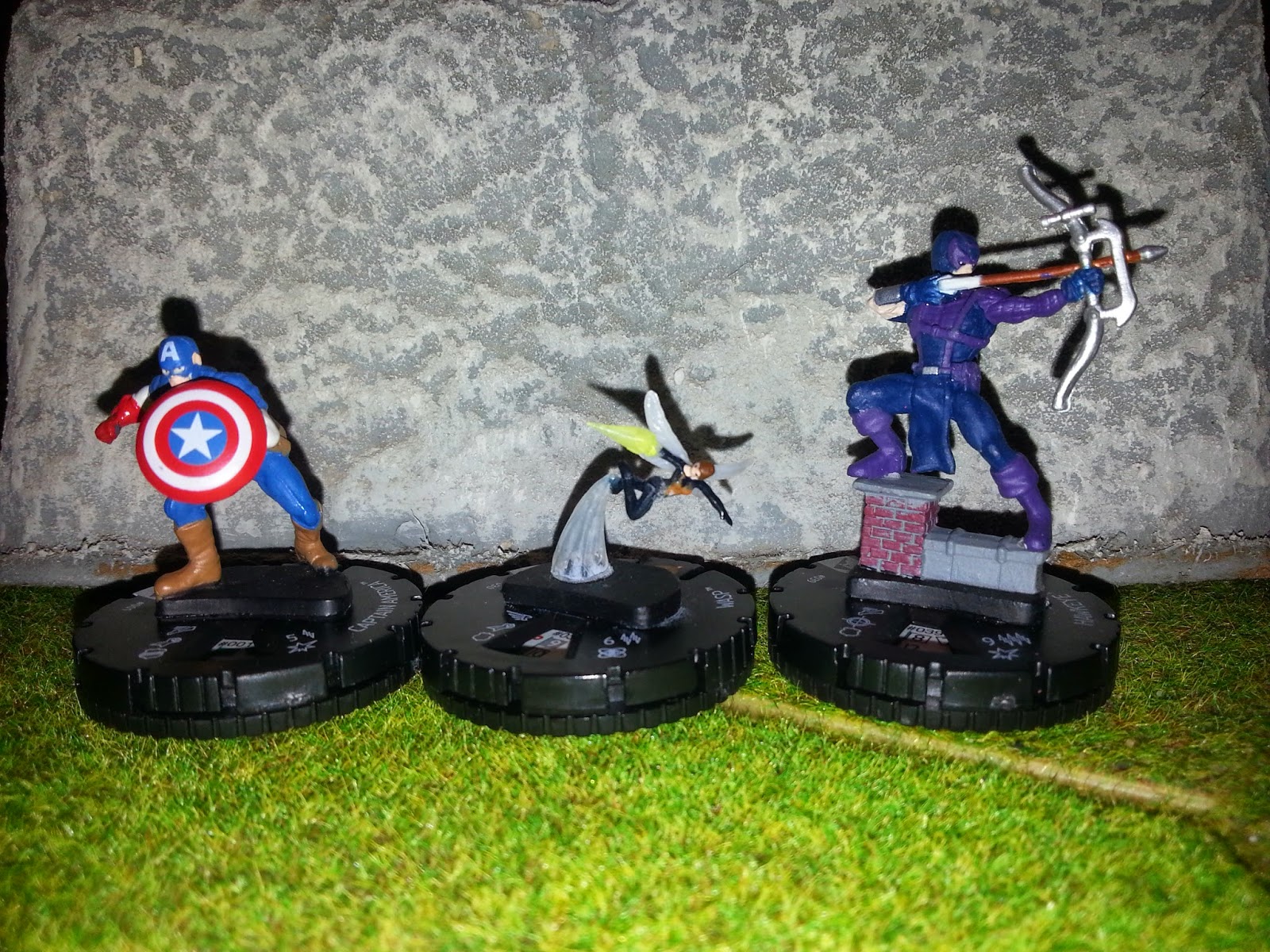 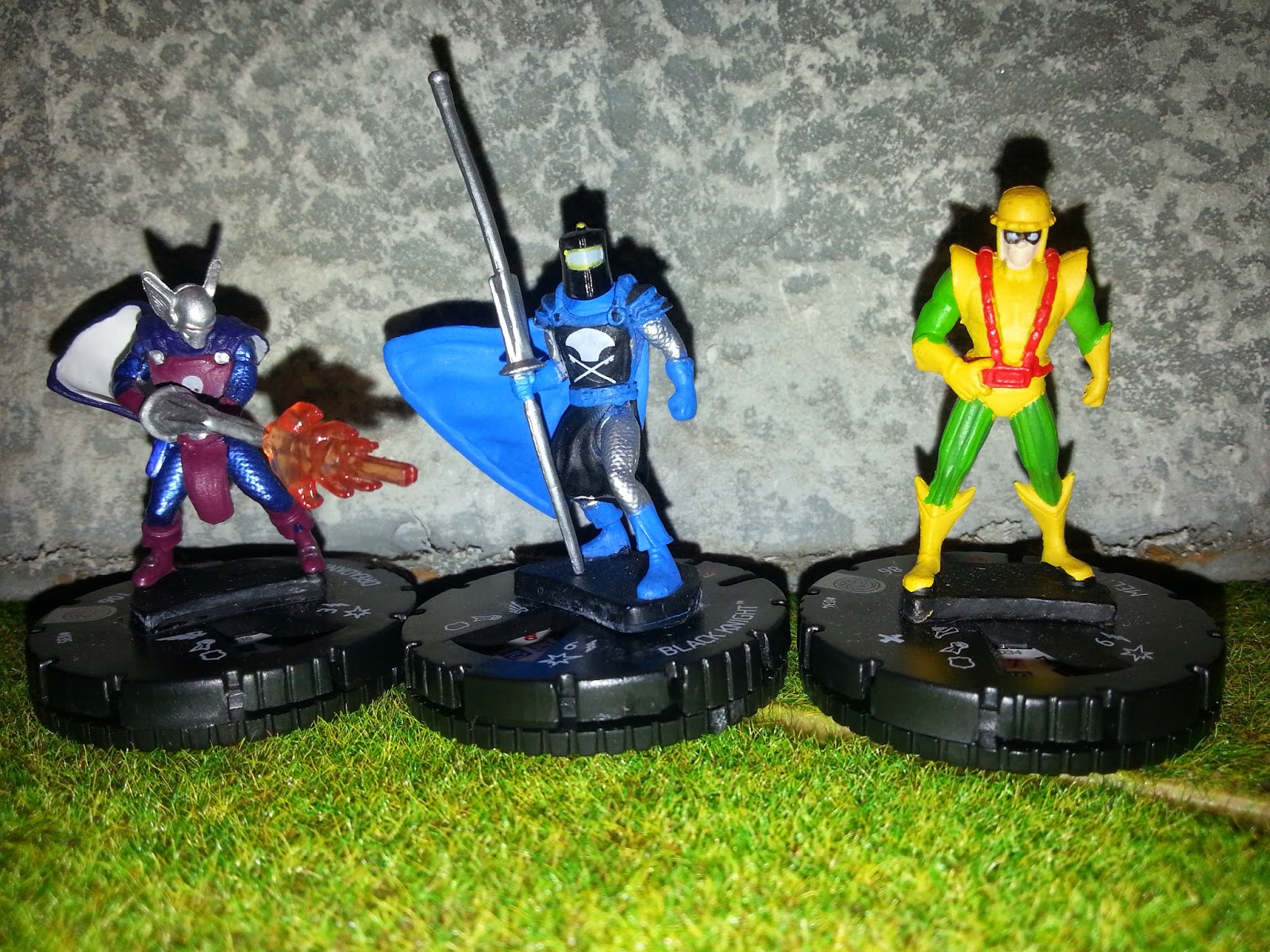 The games started with the villains searching a pair of wrecked properties for a device left behind by a previous occupant.  The heroes enter from the board edge furthest from the villains. 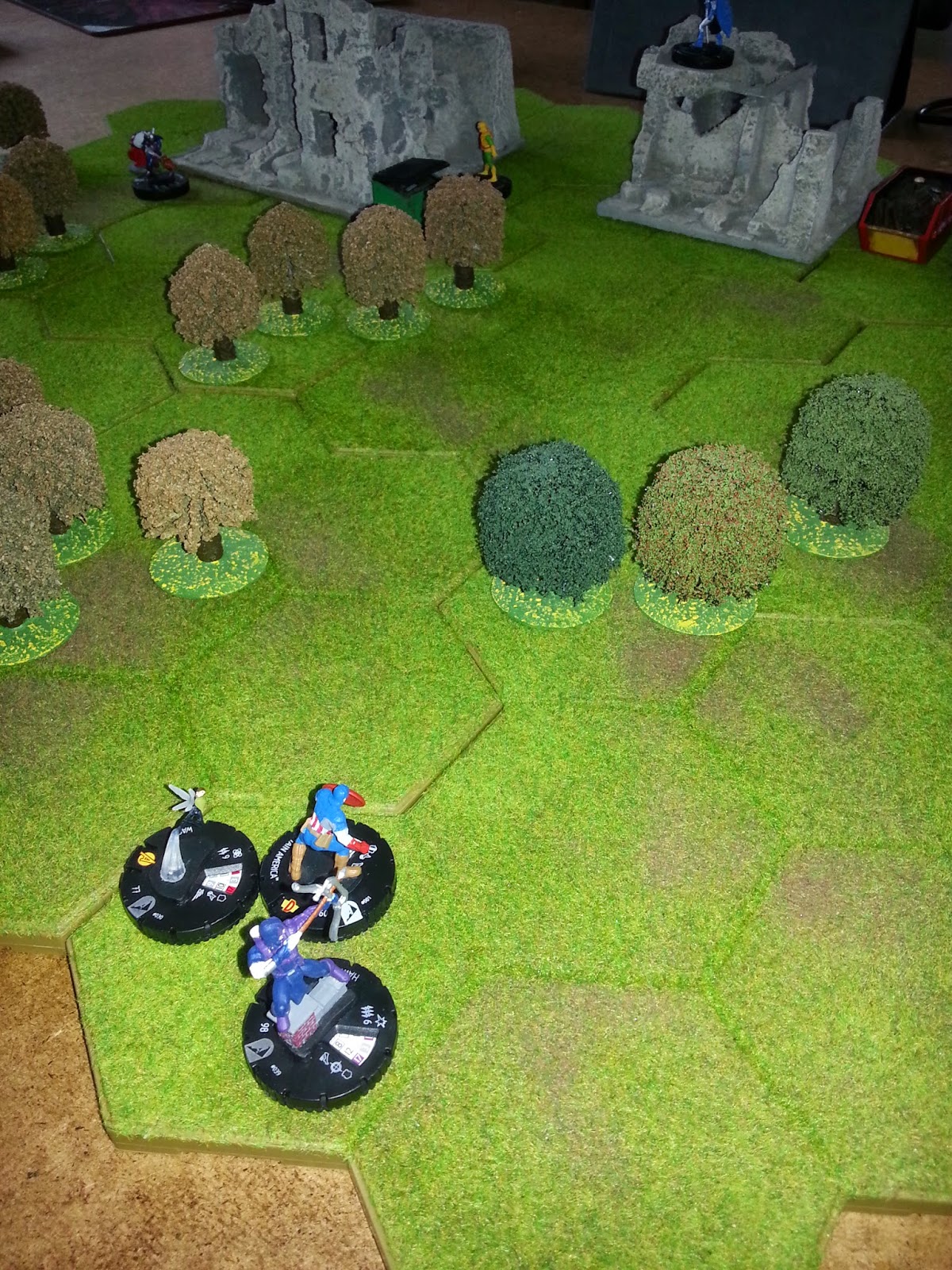 The forces stats were:

Turn 1.  Thanks to Cap the Avengers got the initiative.
Cap moves one action forward
Wasp flies forward and attacked Black Knight, hitting twice but not injuring him at all.
Hawkeye stumbles and the round turns over.

Black Knight fires a shot and misses, his second shot hits but does not hurt Wasp.  He then flies down towards Wasp intending to attack her in hand to hand.

As Dreadknight rolls a one, neither he nor Melter realises they are under attack and continues searching. 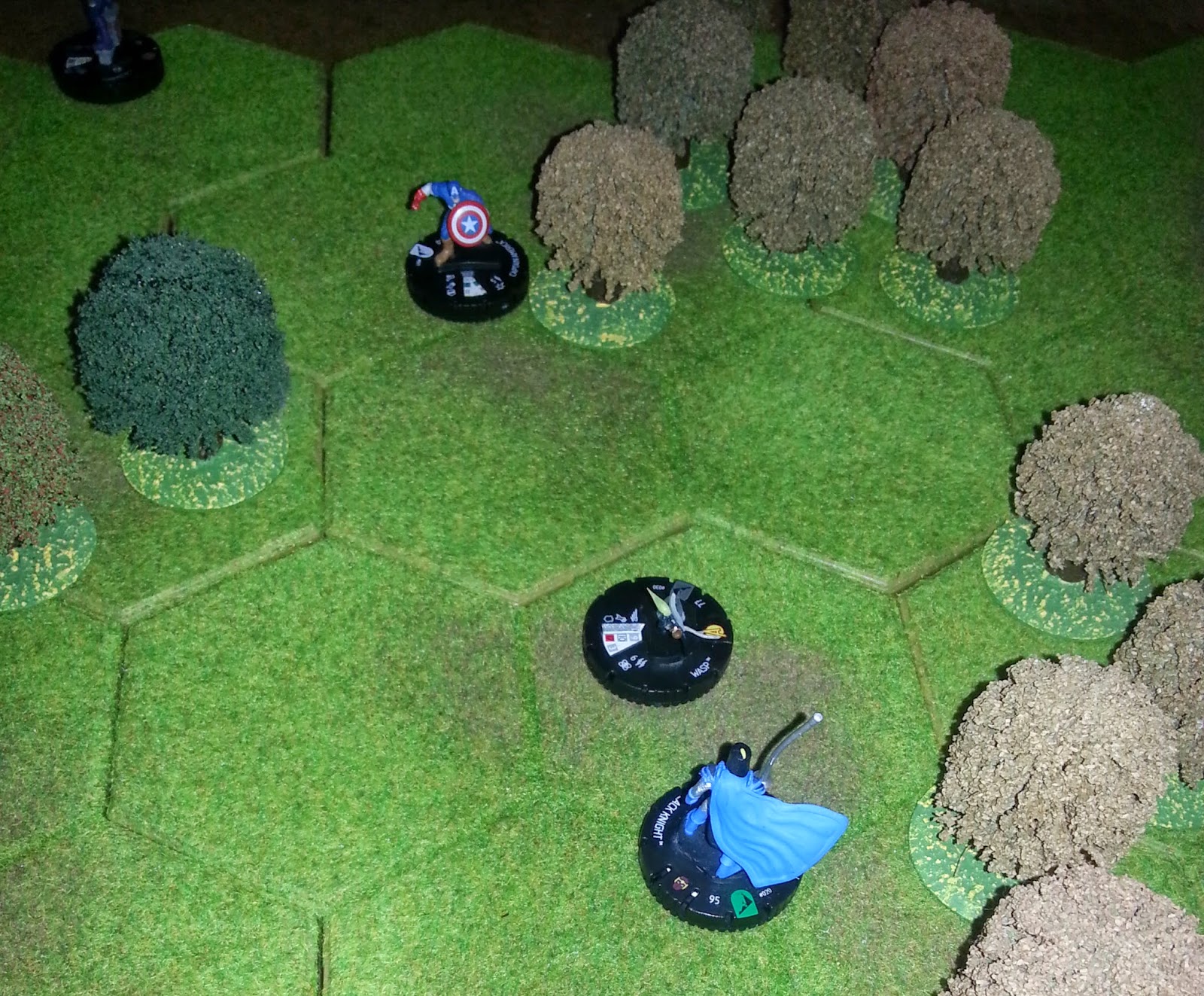 Captain America throws his shield at Black Knight hitting but not harming him.
Wasp flies into the woods, planning to use her Stealth and fires at Black Knight missing him.
Hawkeye has not recovered and rolls another turnover.

Black Knight fires at the hapless Hawkeye, who dodges out of the way.
Mounting his steed, Dreadknight flies towards the fight
Melter moves so he can fire on the Avengers 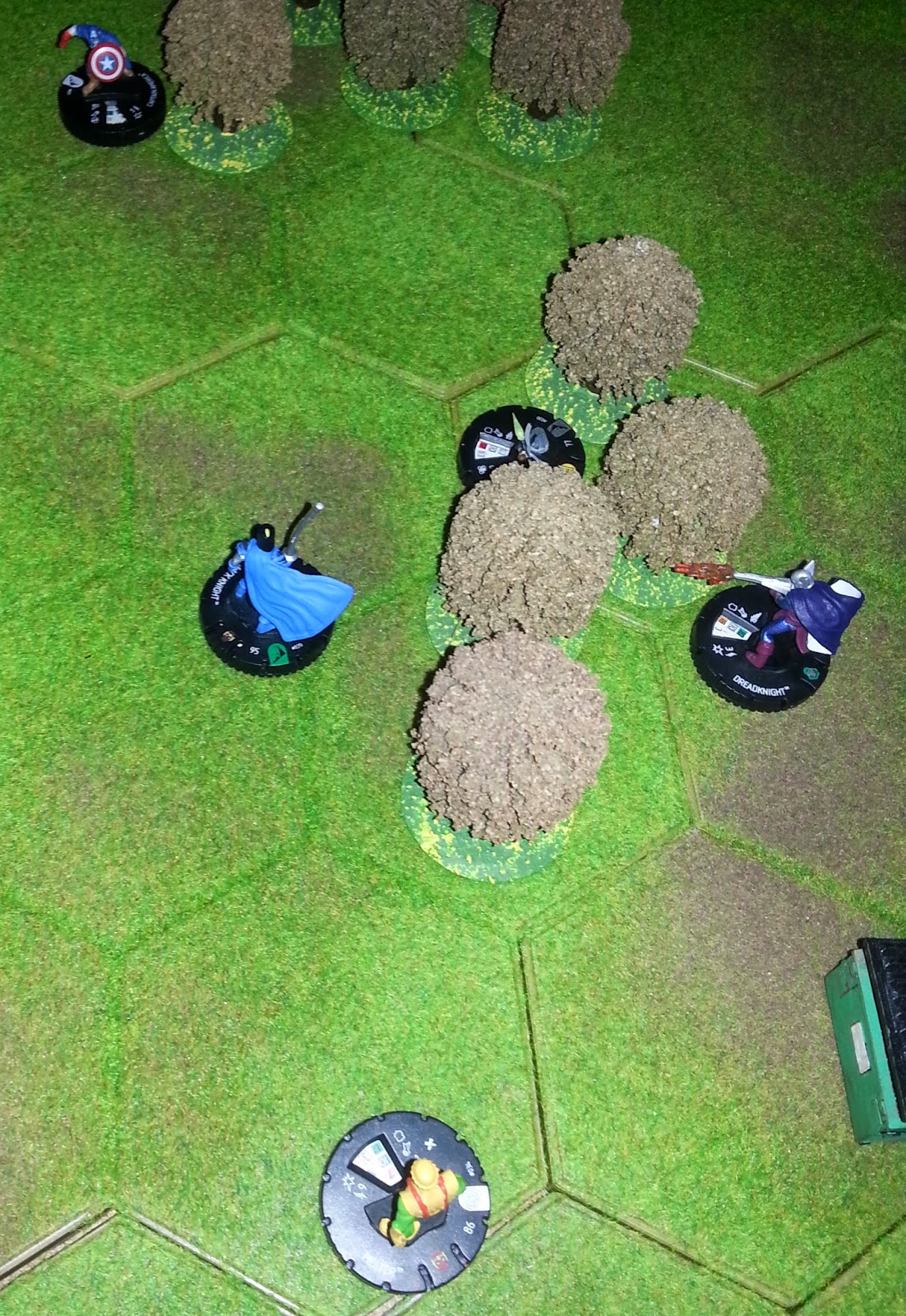 Turn 3
Cap moves forward and hurls his Shield at the Black Knight, striking him solidly.  The Black Knight almost falls from his steed and sent Staggering backwards.

Wasp gets caught in a tree and Hawkeye still hasn’t recovered so the Villains get to go.

Black Knight slips from his saddle to the floor unconscious.
Melter fires a volley of three shots at Cap but they all miss.
Dreadknight flies down to engage Wasp in hand to hand combat.  Despite her frantic dodging, Dreadknight strikes her a vicious blow sending her Staggering.

Turn 4
Wasp flutters back and sinks to the ground unconscious.
Cap charges into combat with Dreadknight, desperate to avenge the Wasp. He delivers a Powerful blow but Dreadknight’s Armour easily soaks the damage.
Hawkeye finally sorts himself out and moves up firing a pair of arrows at Melter.  Both arrows score only glancing blows leaving Melter unharmed.

Dreadknight and Cap are locked in combat.  Cap manages to bypass Dreadknight’s defences but his blow is once again defeated by armour .  Dreadknight attempts another attack but instead Cap strikes him again knocking him from his mount and on to the ground.

Melter fires a bolt of energy at Hawkeye which misses by a mile. 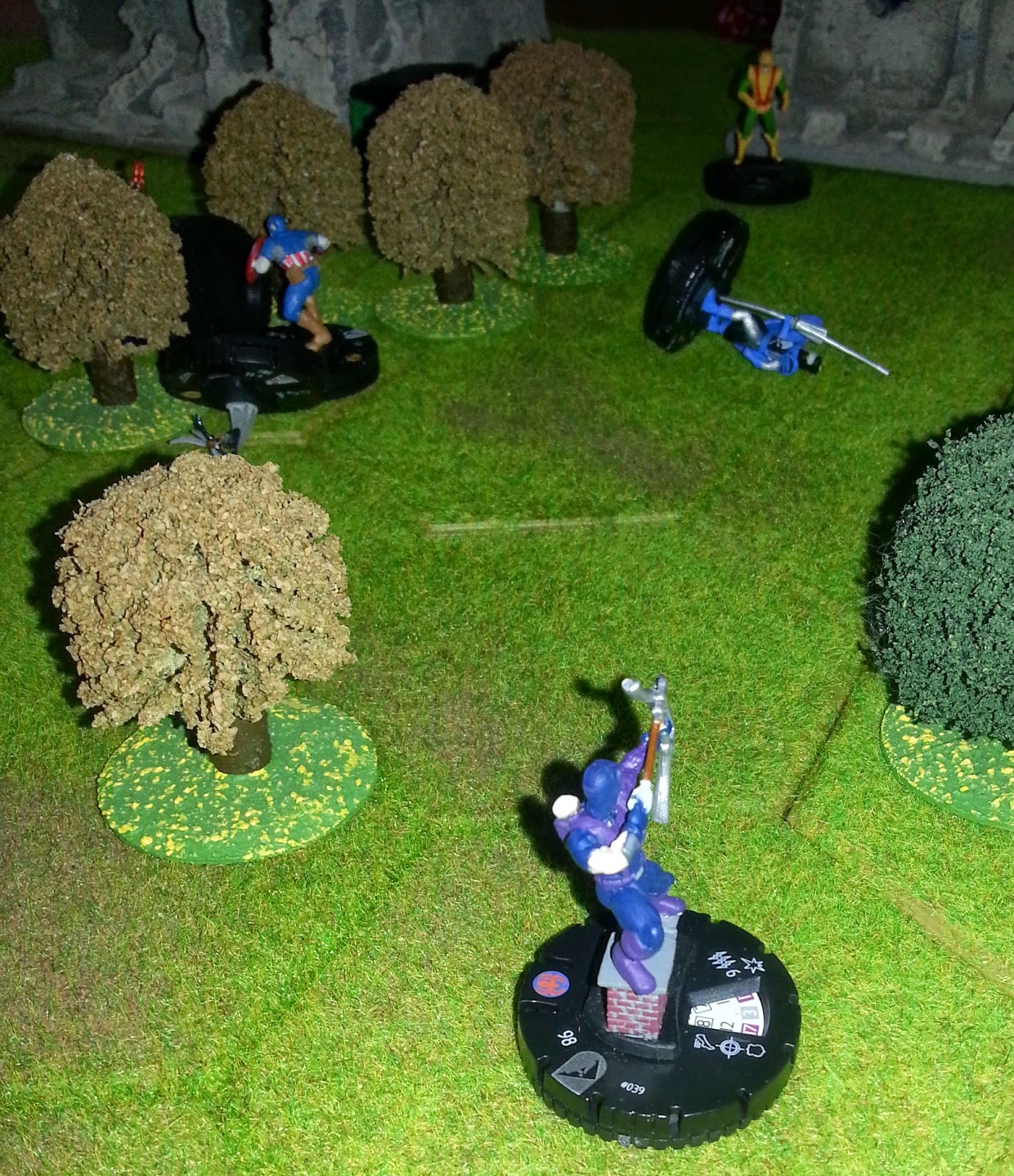 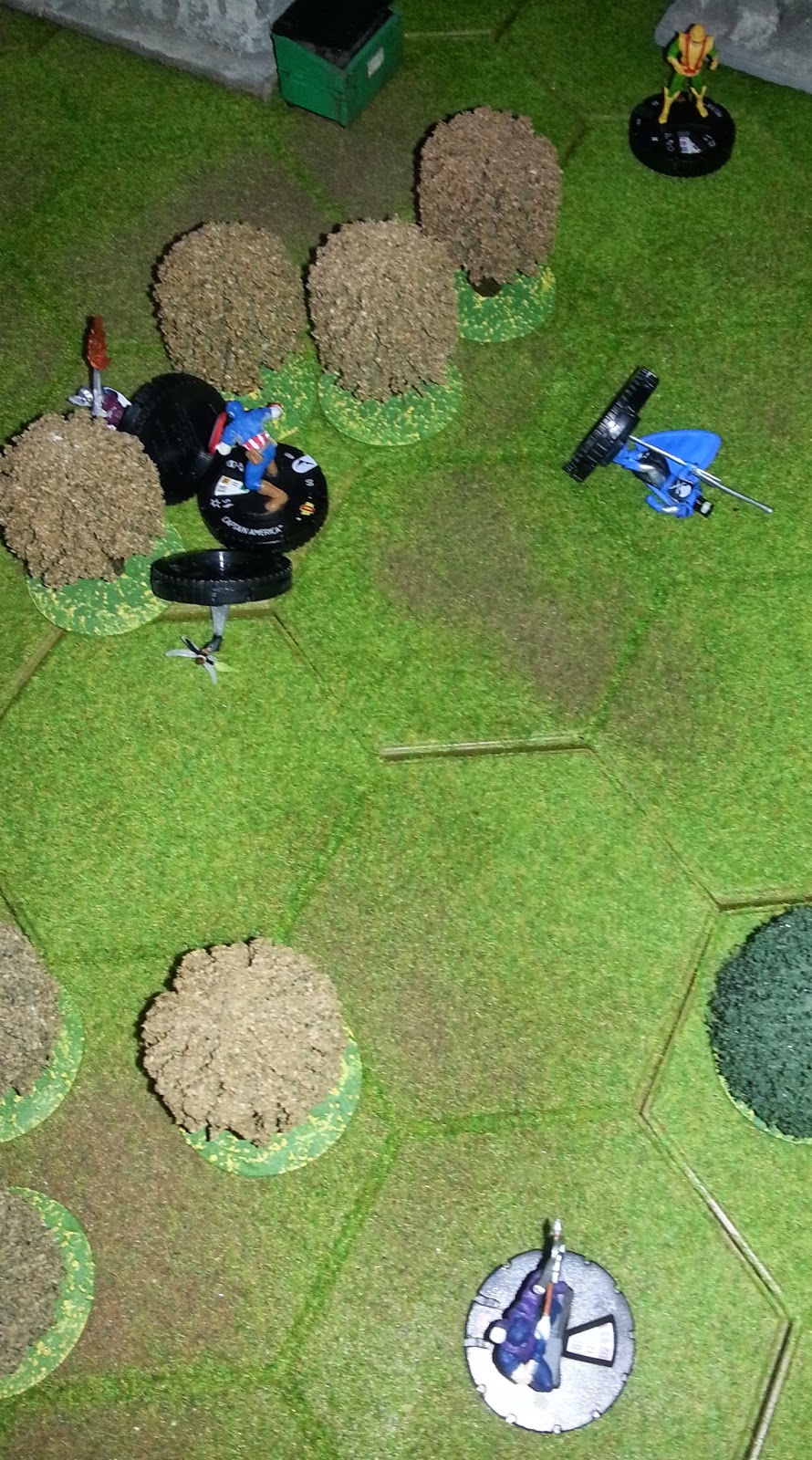 Turn 5
Cap delivers another blow to the downed Dreadknight scoring a Direct Hit which knocks his fallen foe out.

Hawkeye fires an arrow and an Electro Arrow at Melter.  The first arrow sends him Staggering but the Electro Arrow (d10 Gadget) only blurs Melter’s Vision.

Melter manages to clear his vision but does nothing else. 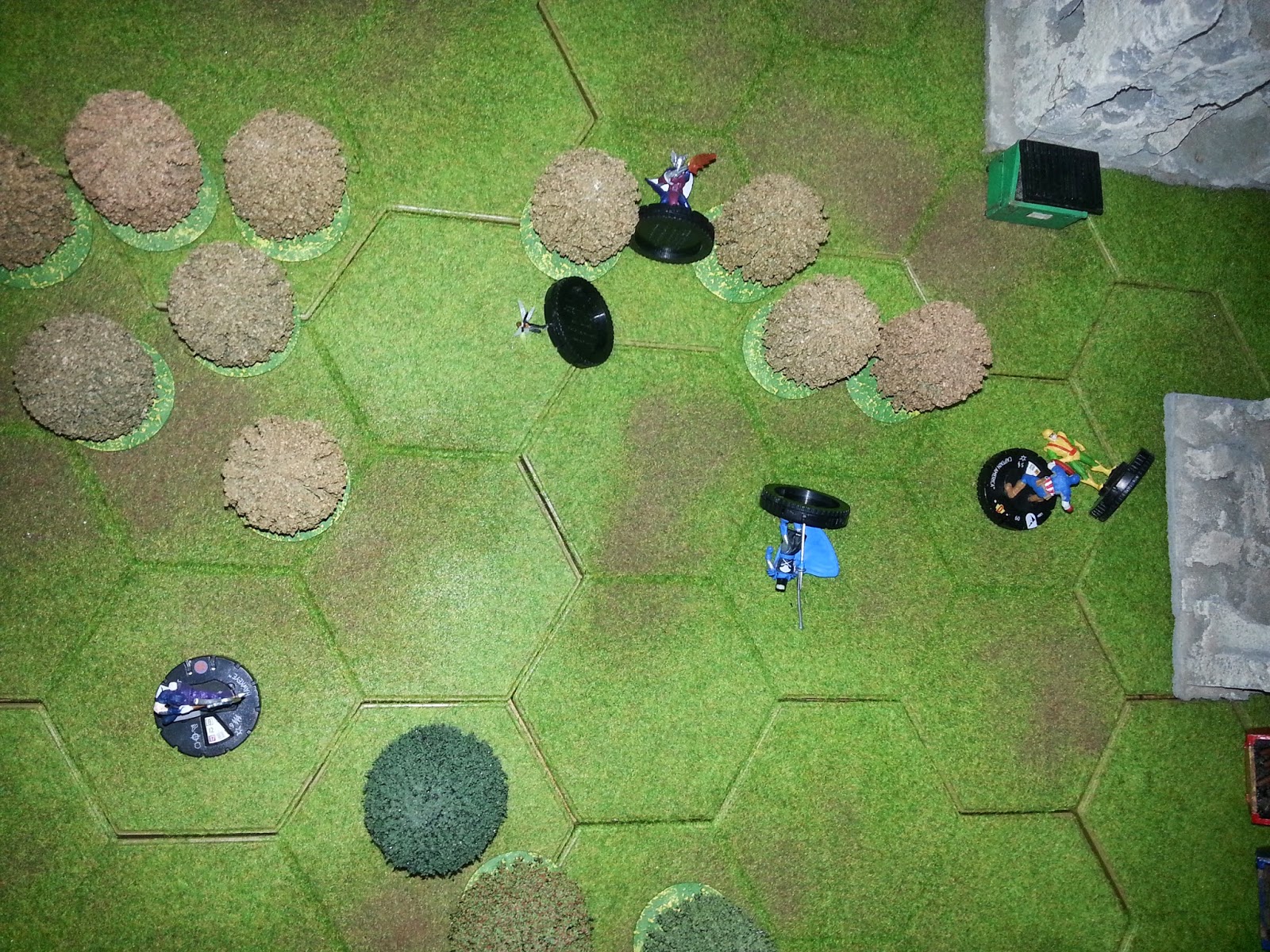 Cap charges into combat with Melter.  Somehow the Melter manages to match Cap blow for blow until inevitably one of Cap’s attacks gets through, knocking the hapless villain to the ground.

Hawkeye carefully aiming past Cap fires another three arrows at the fallen villain scoring a Direct Hit knocking out the villain.

The game worked well, I had been worried that in the game defence was better than attack but that didn't happen in the playtest,  Another thing with the playtest is that neither of the two characters who were Staggered made their knockout rolls.  To try to make things simpler I didn't use Fate or Aces.  Next time I'll use more powerful characters and move the ruined buildings into the centre of the map so they play more of a part.
Posted by Kitch at 10:18