This post has the Power Legion stats for some of Superman's greatest enemies.  (I've finally been able to upload photos again 19/1/18):- 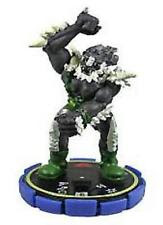 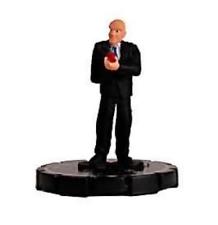 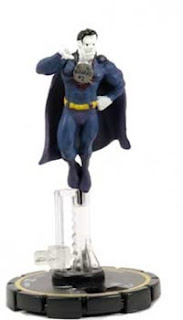 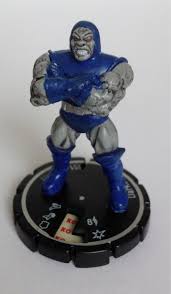 This post provides Power Legion stats for some of the loose group of heroes known as the Defenders. 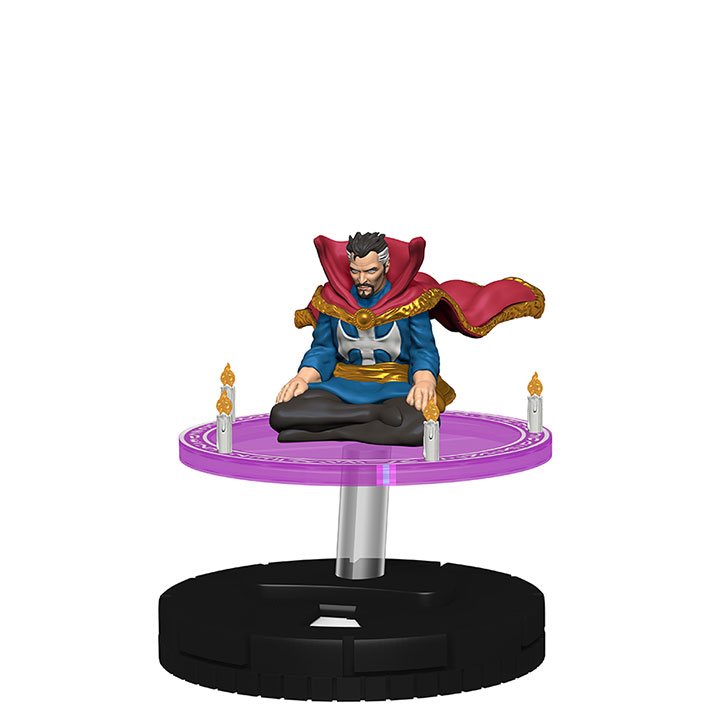 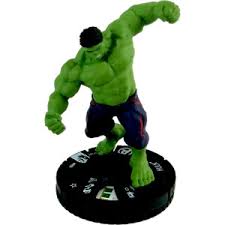 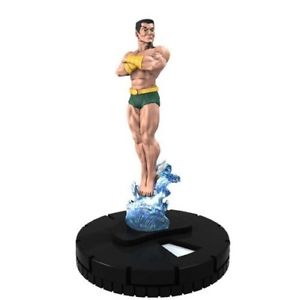 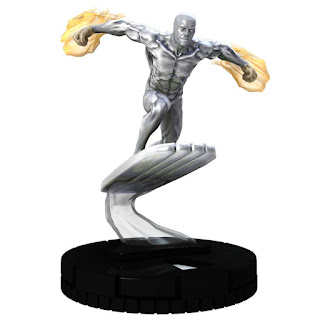 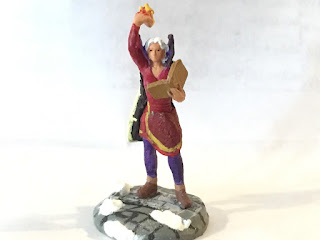 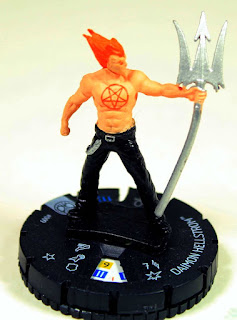 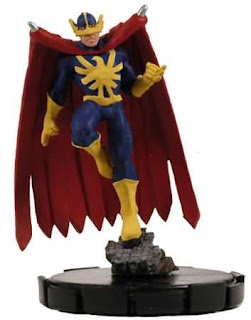 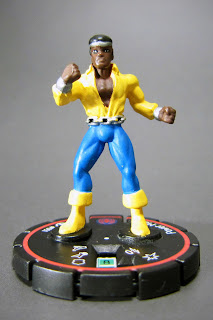 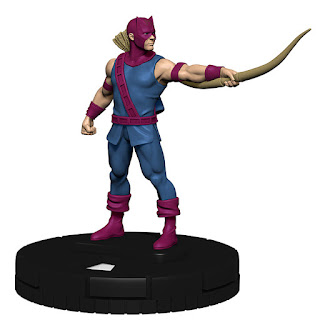 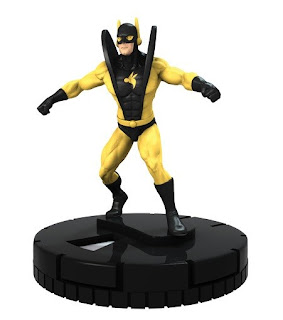 And a later addition to the roster:- 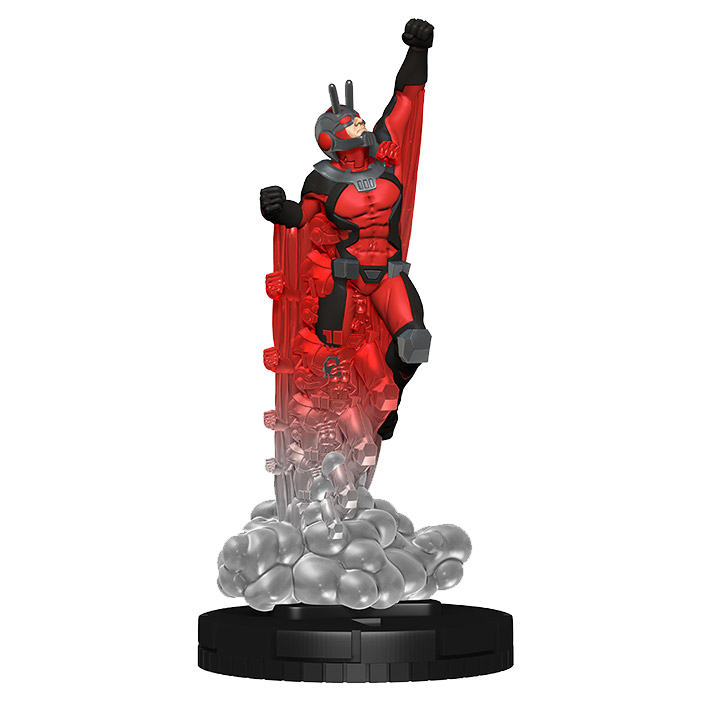 Shrinking is not easy to mimic in Power Legion so I've treated it as invisibility with growing to attack as Flying Kick.  I've used Ranged Damage and Entangle to represent his Insect Control.

About five years ago I did some playtesting of a Ganesha Game for starship combat, Song of Void and Stars.  Unfortunately the game never saw the light of day but I did write up two battle reports.  The first, using Wizkids Rocketmen ships was featured on the Song of Void and Stars blog.  The second was due to be published there but sadly never was.  I've recently found the document and photos and thought I'd publish it here.

This battle report is based on a clash between a Federation and a Romulan Task Force.  It takes place in the Chalcis System, close to Chalcis III and its moon.

USS Victory (Constellation Class) as above 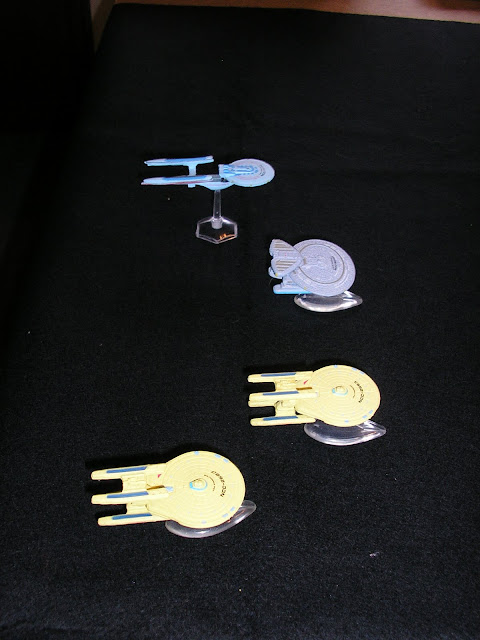 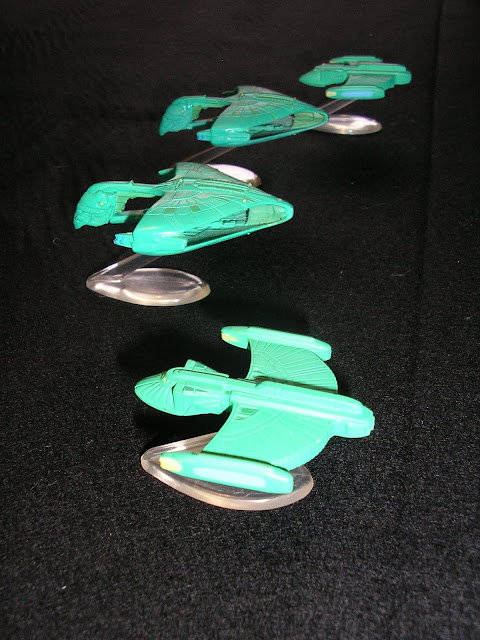 Both forces close in on Chalcis III using the planet’s mass to mask their intentions from their enemies.

The Federation took the initiative when the Stargazer II accelerated ahead of the task force and launched photon torpedoes at the Pi.  The rest of the Federation Task Force followed more cautiously.
The Pi pushing its impulse engines to near maximum headed for cover behind the moon.  The Chi broke away from the cruisers on an intercept course with the Pi. Both Romulan Cruisers held their fire and moved towards the Federation ships. 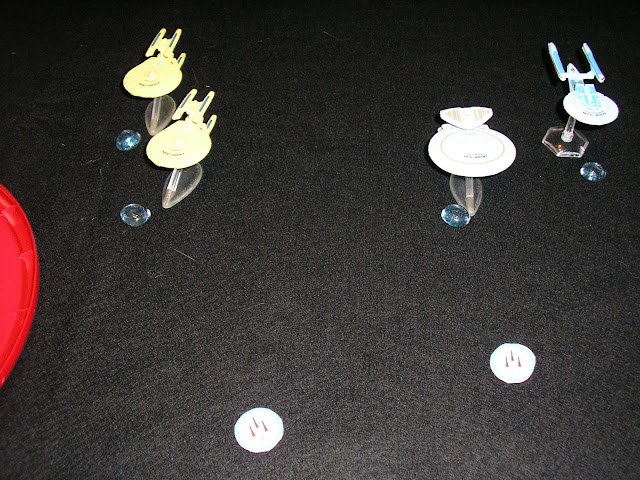 The two Federation Escorts headed for the Red Planet, the Stargazer II fired more torpedoes at the Pi.  In an effort to overload its shields the Excelsior fired its Phasers at the Pi.  The beams struck the smaller ship, piercing its shield and damaging several of its systems.  The Farragut also targeted the Pi with a sustained shot from its main Phaser array.  The beam damaged the Scout’s weapons but the small ship survived. 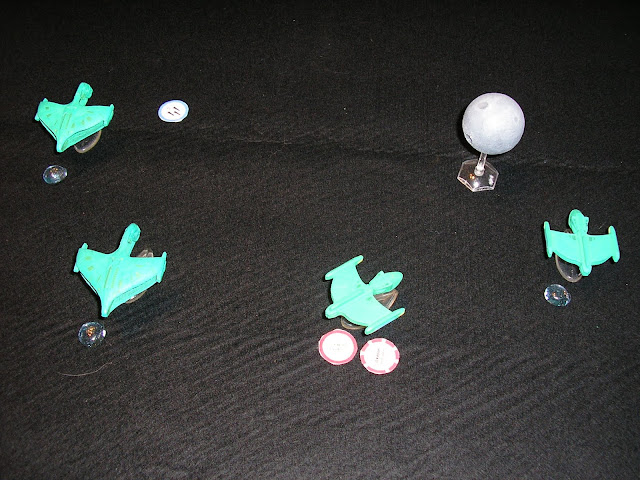 The Chi sheltered from the Federation ships fire behind the Red Planet’s Moon.  The Terix moved to cover the Pi’s flight, launching torpedoes at the Farragut as she went.  The Makar increased power to its impulse engines and powered directly towards the Farragut firing a sustained Phaser burst at her foe.  The Farragut’s shields flared but held.  As the Pi made a run for the cover of the moon, her repair teams managed to get her shields and systems back on-line but she was too slow to avoid the Stargazer II’s torpedoes.  They struck her as she ran, if she hadn’t raised her shields she would have been vaporised, as it was her shields absorbed some of the impact before collapsing.  The resulting damage destroyed her port wing and several of her weapon systems.

The Stargazer II manoeuvred to port to try to intercept the Photon torpedoes speeding towards the Farragut but in the event was only able to destroy the Pi’s Torpedoes heading for herself.  The Farragut ignoring the homing torpedoes turned across the path of the Makar, firing a sustained burst of Phaser Fire at the Romulan Cruiser.  The Makar’s shields absorbed the burst but were temporarily depleted.  The Excelsior and the Victory held their fire waiting for a better shot.  The Terix’s Torpedoes brought down the Farragut’s shields but did no other damage.

The Makar flew alongside the Farragut raking her with Phaser fire resulting in damage to several of her systems.  The Farragut’s Power Flux De-couplers were ineffective.  The Terix tried to finish the job the Makar had begun by firing a sustained burst of Phaser fire at the federation flagship and launching a large spread of torpedoes at the weakened vessel.  She scored a series of hits on the hull of the Farragut destroying some of her weapon systems.  The Pi continued towards the moon, whilst the Chi performed a slingshot around it.  She headed towards the Farragut, launching Photon Torpedoes towards the Federation Cruiser. 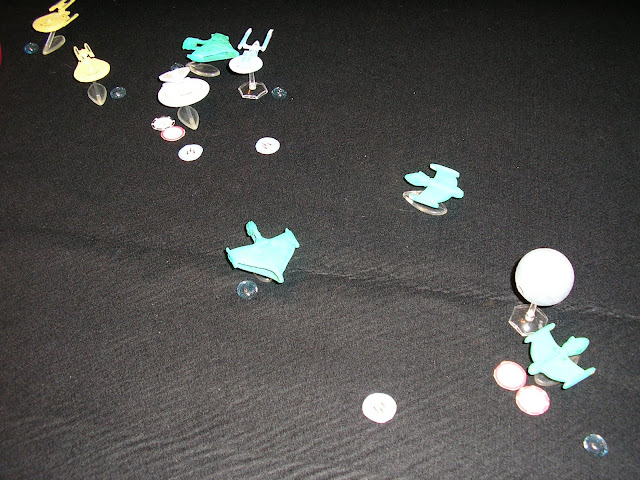 Seeing her flagship taking damage the Stargazer II flew alongside her and tried to destroy one of the incoming torpedo spreads but her Phasers went wide and the torpedoes continued their inexorable flight towards the Farragut.  The Hood placed itself between the Terix and Farragut firing a sustained burst at the Romulan.  It brought down the Romulan’s shields but did not damage the ship.  The Farragut followed the Hood, turning so that the Torpedoes about to strike her did not hit her aft.  At the same time her repair crews brought her systems back on-line and she launched a spread of torpedoes at the vulnerable Terix.  The Victory, lagging behind her allies fired a sustained Phaser burst and a Photon Torpedo spread at the Makar.  The Phaser shots brought down the Makar’s shields and the Photon Torpedoes caused damage to her systems.  The Farragut’s torpedoes damaged Phaser emitters on-board the Terix.  At the same time the Farragut was struck by two Torpedo spreads.  Her shields collapsed and multiple hits crippled her main Phaser array and caused damage to most of her remaining weapons.  Just as it looked as if the Pi might reach the safety of the moon, she was struck by several torpedoes and with her shields still down; there was nothing to stop them tearing her apart. 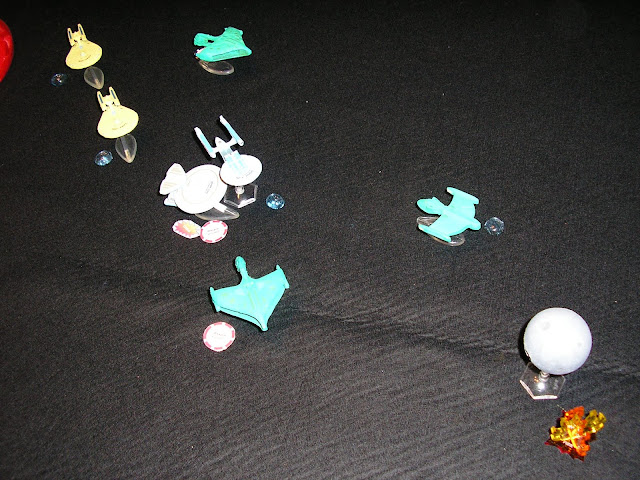 The Terix closed with her crippled foe, the Farragut, aiming to deliver the Coup de Grace.  Turning across her line of flight and firing a sustained Phaser burst into her already badly damaged hull.  Pushing her crew to the limit, the Farragut fired her Evasive Thrusters and was able to dodge the Terix’s fire.  The two other Romulans manoeuvred without firing.

The Farragut managed to strengthen her shields and fire Photon Torpedoes at the Terix.  At the same time, the Hood fired a sustained Phaser burst at the Terix and launched more Photon Torpedoes at the Romulan.  The Phasers destroyed the Romulans damaged weapon arrays.  Seeing the vulnerable Romulan dead ahead the Stargazer II laid in an intercept course, firing Phasers and Photons as she went.  The Phasers scored some damaging hits on the Terix’s systems.  The Victory performing an emergency heading change put most of her power into her impulse engines and cut across the aft of the Makar firing Phasers and Photons.  The Phasers brought down the Makar’s shields but otherwise she was unharmed until the Photons struck damaging her Phaser Arrays.  The Terix’s defences were completely overwhelmed by three Photon Torpedo spreads striking her at once.  Explosions blossomed along her length as she slowly collapsed in on herself before vanishing in a fireball. 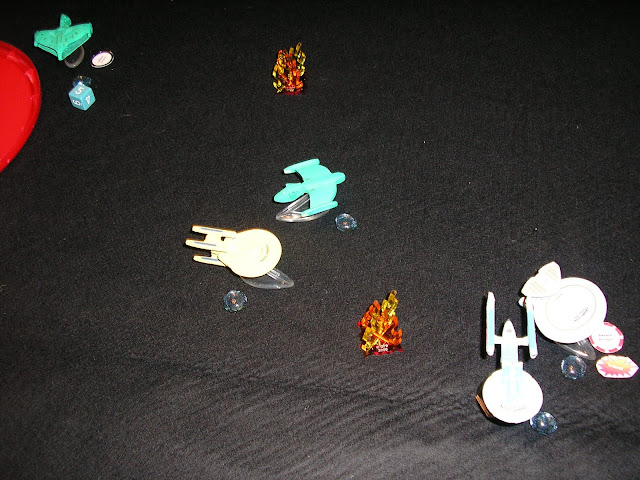 The loss of the Terix shook both the Makar and the Chi but they did not flee.  In fact the Makar was able to repair the damage to its hull and bring its Phaser Arrays back on-line.  She skirted the planet’s upper atmosphere firing Phasers and Photons at the Victory.  The Phasers tore through the Victory’s shields damaging her hull and Phaser Arrays.  The Chi repaired its system damage and launched a torpedo at the aft of the Victory.  They tore through the Engineering Section breaching the warp core.  There wasn’t time to launch escape pods before she was ripped apart.

The battle now came down to the crippled Farragut, Hood and Stargazer II against the shaken Makar and the Chi. 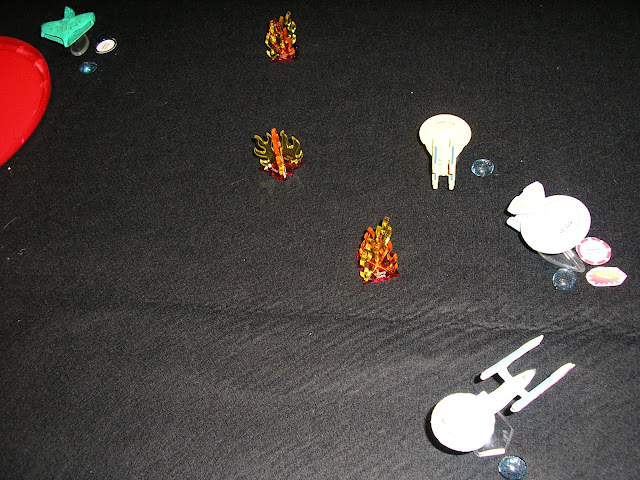 The Hood turned to starboard and fired a sustained Phaser burst against the Chi.  The Scout’s shields flared as they absorbed the impact.  The Stargazer II fired her Phasers and Photon Torpedoes as she manoeuvred around the Chi.  The Scout with its shields already overloaded by the Hood was no match for the Victory’s barrage and she blossomed into a growing ball of plasma.  Seeing the futility of continuing an unequal fight the Captain of the Makar, gave the order and her Helmsman took her out of the system at Warp.  With the Farragut crippled the Federation task Force was in no position to pursue. 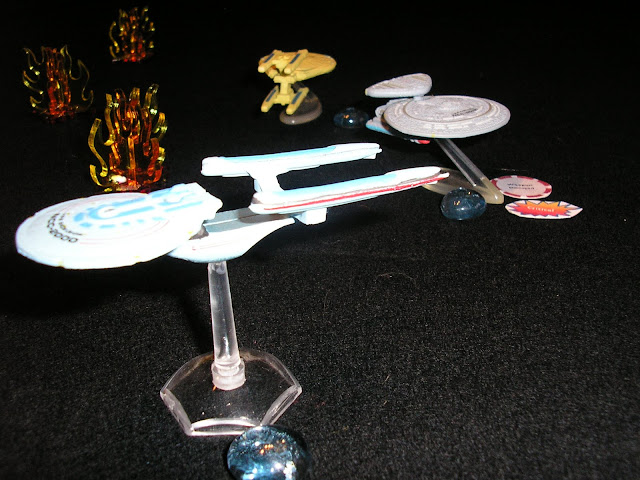 The blue gaming stones were used to mark the shields on the various ships.
Posted by Kitch at 14:23 3 comments:

When I posted my conversions of the WILDCATS super team I missed a couple of members that exist in Heroclix form.  These were Mister Majestic and Ladytron.  This post rectifies that oversight. 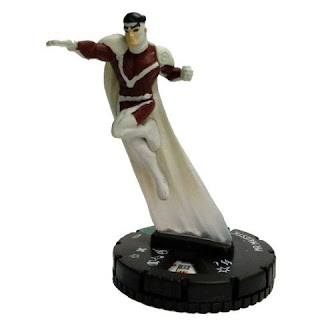 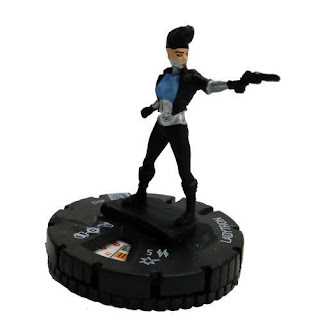