To The Strongest - Anglo Normans vs Pre Feudal Scots

Last night three of us gave To The Strongest another try.  We'd enjoyed the last game and had agreed to try my Norman Army against Steve's Pre-Feudal Scots.  Mark had worked up a scenario which I'd been unsure of but worked very well.  The scenario was a battle for a bridge in the middle of the board.  To The Strongest uses squares for movement and firing so the objective of the game was to hold the square on each side of the bridge.  The forces were divided into two commands each.  The Anglo-Normans were equally divided with one command entering along the road to the bridge and the other along the river.  The Scots forces had two thirds of their force appearing along the road on the opposite the Norman's first command and the other third entering along the river on the opposite side to the Norman's second force.

In the first few turns the Norman's first command suffered from command paralysis.  The Normans should have been able to seize the nearby woods, the bridge and prepare to take on the approaching Scots.  Instead they just managed to line up a unit of Knights against one of the Scots Generals.  The other Scots General with his Thegns can be seen on the far side of the river.  The bridge has been captured by Scots light archers which have already shot down the first unit of Knights which tried to dislodge them. 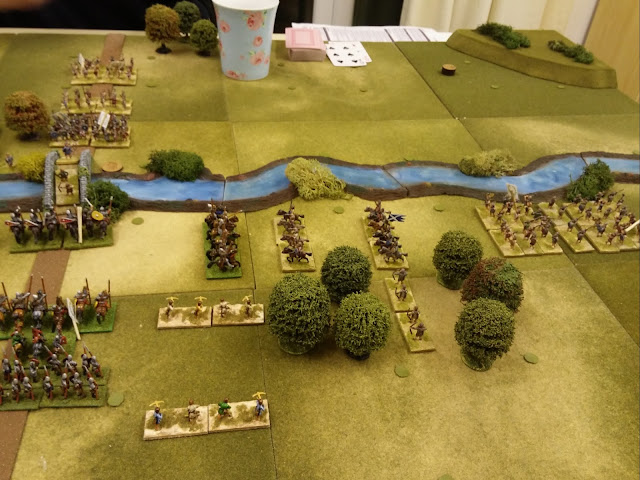 The Scots on the far side of the river have sent most of their force to fight the other Norman command who have found a ford but have struggled to cross. 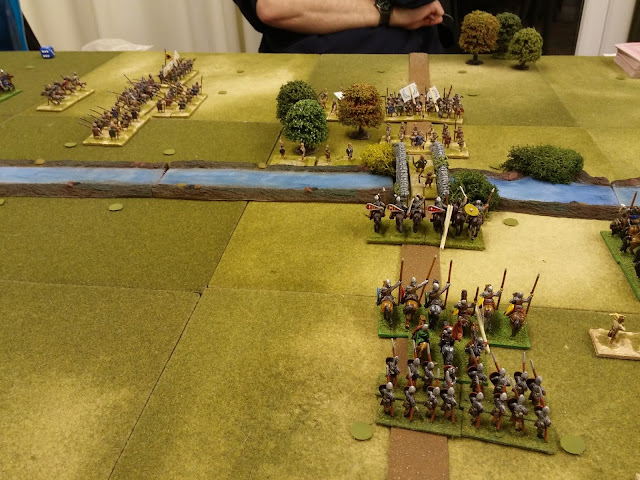 The Normans react by charging the approaching Scots.  They also send two units of Knights to support the battle developing to the south of the bridge. 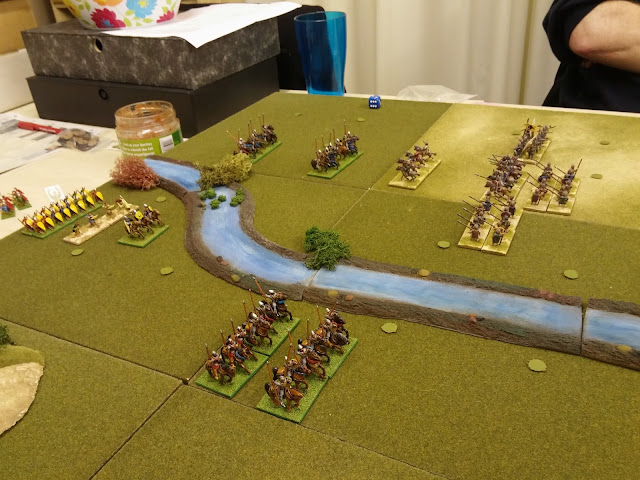 That battle is developing with the Normans disrupting a unit of Galwegians and holding off the Scots general (Cavalry carrying the scots flag).  The Normans have lost a unit of light bowmen and have struggled to even get into the woods. 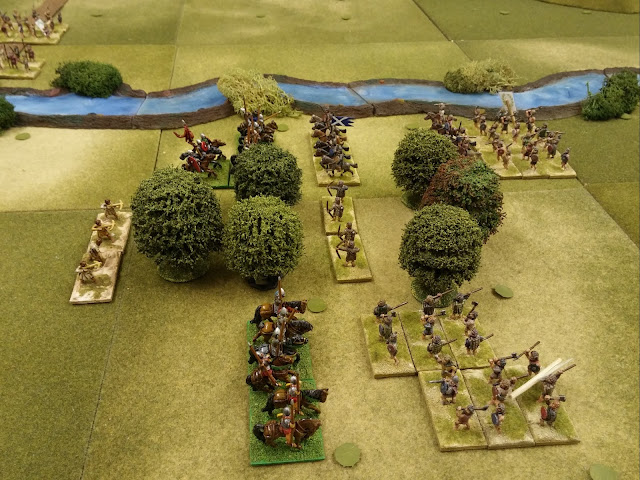 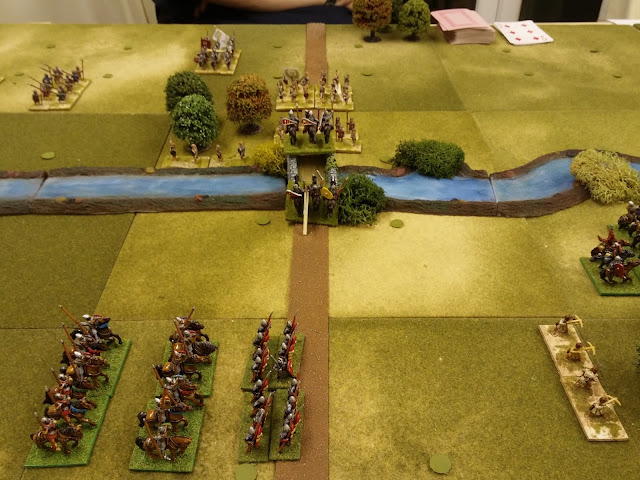 On the other side of the river the Normans had already had a Knight unit driven back in disarray but now had a Shieldwall to cover them and a unit of Light Crossbowmen to pepper the Scots Shieldwall. 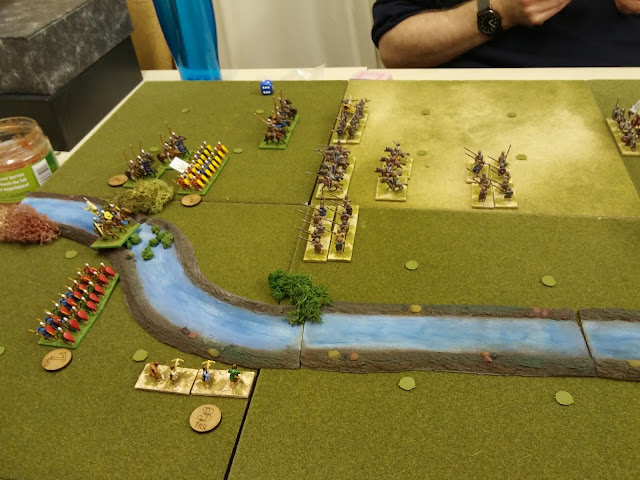 Things went from bad to worse for the Normans as their Veteran Knights on the bridge were first disordered by Scots Javelinmen and then charged by a Shieldwall and broken. 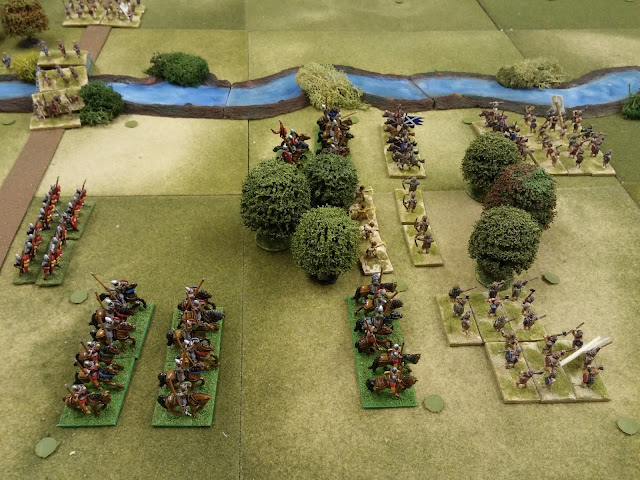 The Scots General and his Thegns set off to support the attack on the Normans to the west and the Shieldwall prepared to cross the bridge and threaten the flank of the Veteran Norman Shieldwall. 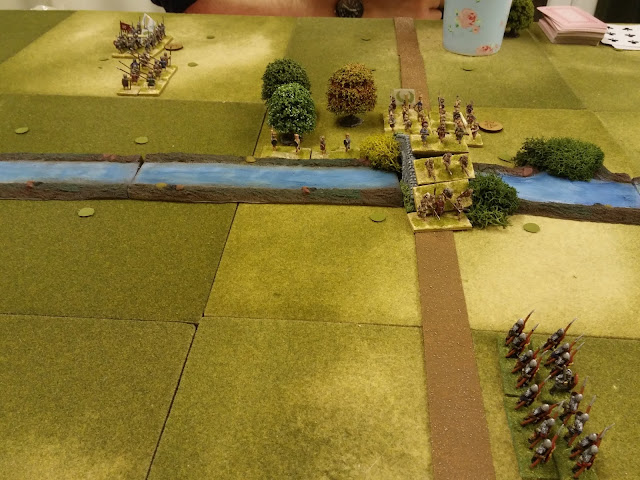 The Normans across the river were destroyed by a concerted attack by the Scots but their Shieldwall was shot down by the Norman Light Crossbowmen. 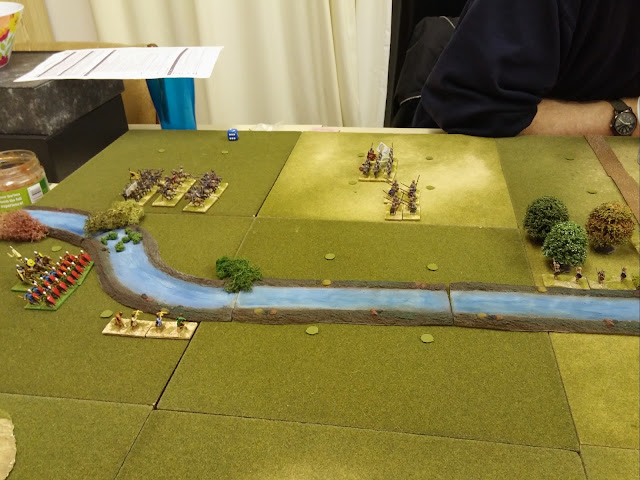 On the south side of the bridge the Normans were finally developing a major attack on the Scots and were hopeful of crushing the smaller command. 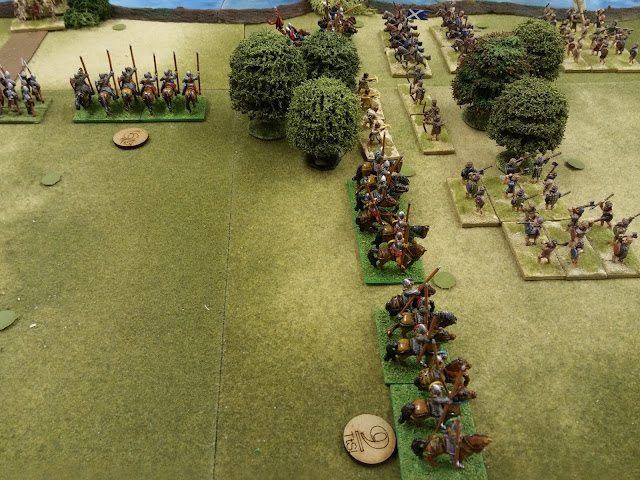