This post provides the stats for the British super team Excalibur and their ally Technet.

From the Marvel comic series of the same name M.O.D.O.K's 11, well some of them anyway. 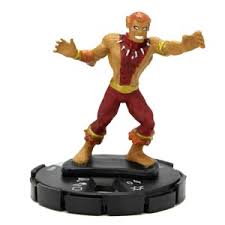 
I might come back to the Living Laser to give him armour to protect him when he's not Immaterial.

This version of the Ultra Adaptoid has copied many of the powers of the Fantastic Four.