This week we tried a second game of Song of Drums and Tomahawks.  This time we tried a scenario driven game.  My Provincials had sent out a patrol to capture an evil French Spy from their base, the Inn they captured before.  The French and their Indian Allies were trying to rescue the poor Italian priest the wicked British had dragged away from his flock.

The French and Indians forces were:-

This is the Inn garrisoned by the Provincial's Officer and a small group of soldiers. 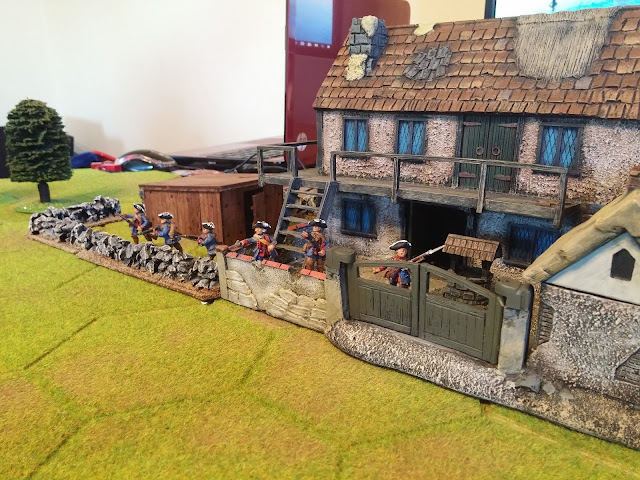 This is the patrol with their prisoner in tow. 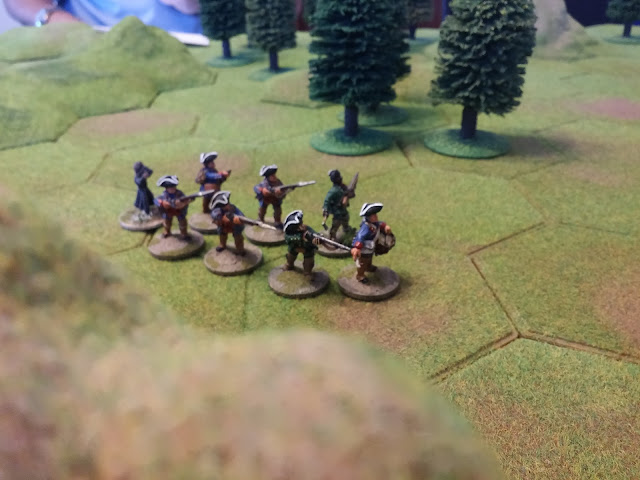 This is the end of turn one with the patrol hurrying back to their base with their prisoner.  The French are close behind and the Indians are hiding in one of the woods.  The patrol has gambled on the Indians being in one of the woods on far side of the board.  They moved in a group using the March move.  We allowed the Rangers to use this group move even though they normally wouldn't have been allowed to. 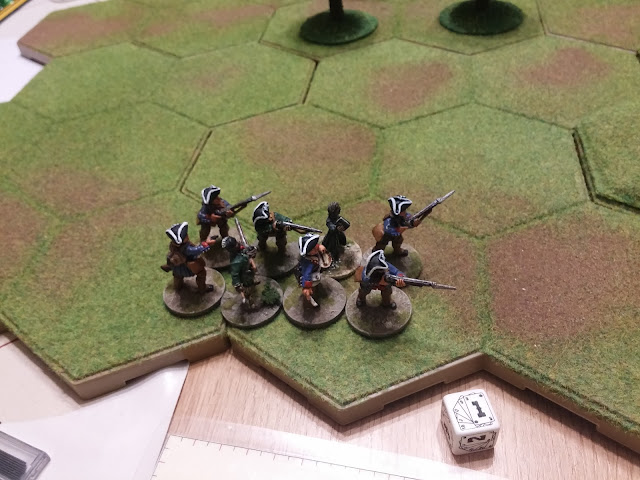 The Indians were in one of the woods on the far side of the board but quickly moved out using the Indian File group move. 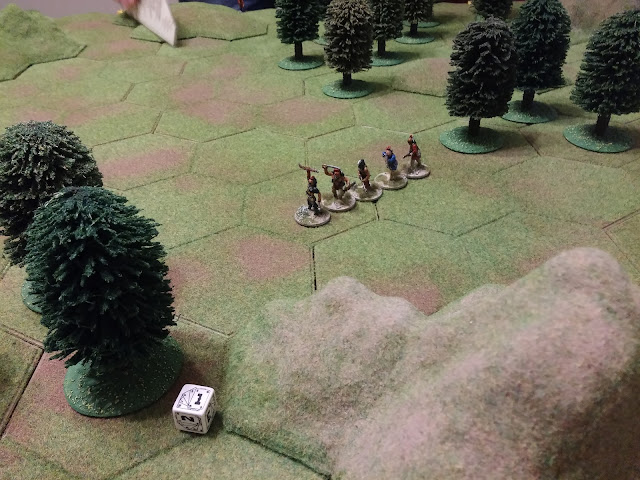 Luck was with the British as they were able to double time whilst the Indians faltered and failed to move at all, meaning their French Allies didn't appear.   The patrol rushed onwards whilst the Indians slowed. Only the Young Warrior managed to move to get close to the patrol. 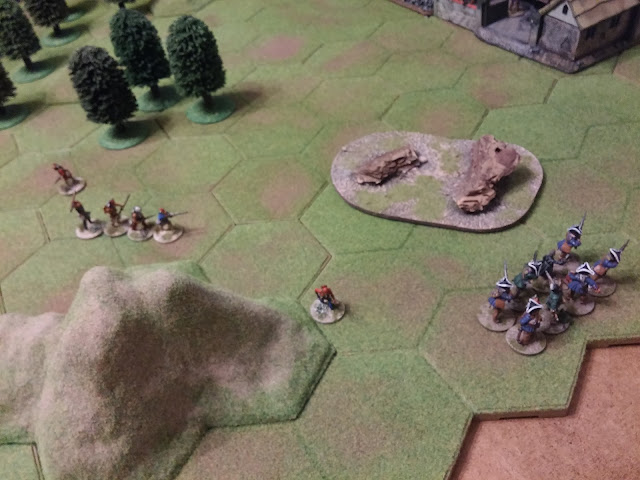 The French finally appear in not so hot pursuit. 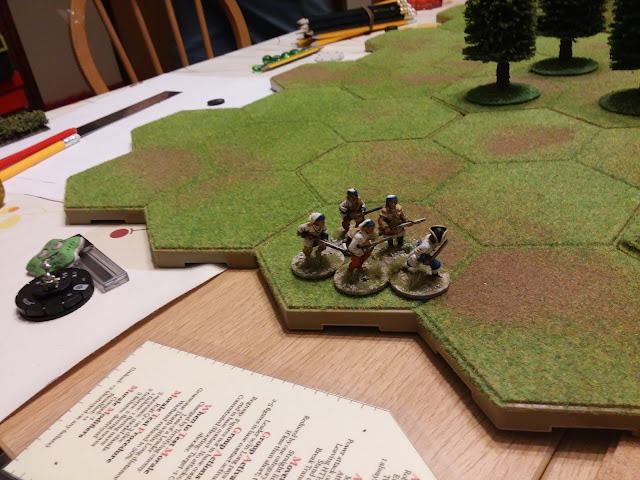 The patrol slowed as the Indians managed to finally catch up, making for cover from which to snipe at the soldiers even though the Inn was in sight.  The Grenadier had opened the gates in readiness.  Two of the Provincial Infantrymen stopped and fired at the Indians.  They both missed but the Grenadier was able to knock down the foremost Indian. 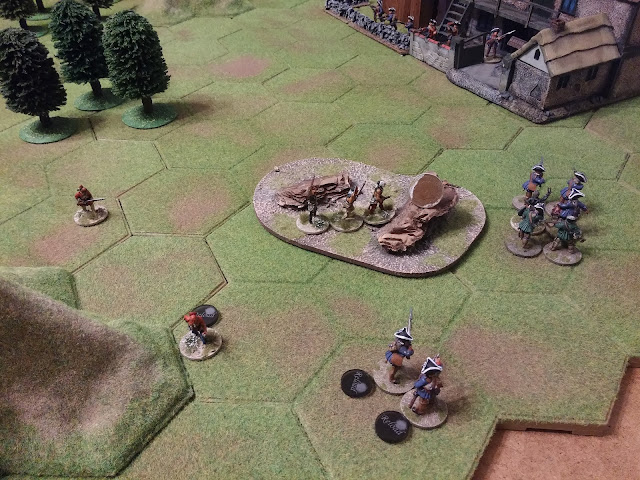 More fire from the Inn knocked down a second Indian.  Things looked good for the patrol. 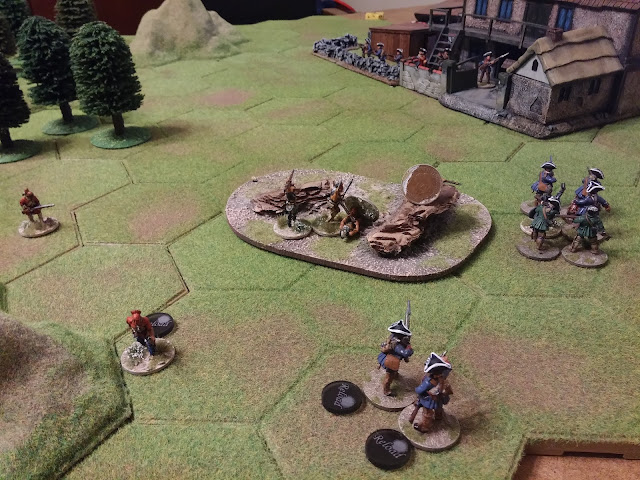 The French were far, far behind. 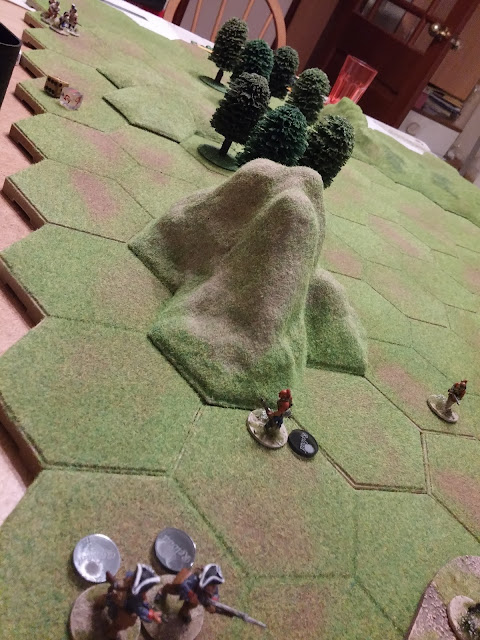 When it appeared safe the patrol faltered and the Indians managed to recover and come howling into the attack.  The Sergeant dragged his prisoner and a single Soldier and pressed on, just failing to reach safety.  The garrison began to sally forth to help.  The Grenadier charging into contact, while the War Leader engaged one of the Rangers and the Young Warrior attacked the stragglers. 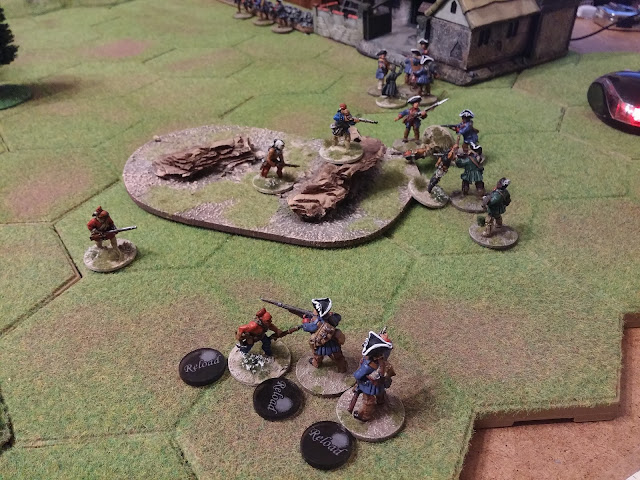 The officer tried to grab the Priest and run back into the Inn but he tripped and his side lost the initiative.  The Indians rushed into the attack.  One of the stragglers killed the Young Warrior but was then shot by another Warrior who drew his scalping knife and began to move to collect his trophy.  The Grenadier was knocked down by the Warrior he was fighting despite his strength and a soldiers support.  The War Leader killed the outmatched Ranger he was facing and another Indian caught the Provincial's Sergeant making him release his prisoner.  The Priest had a chance for freedom. 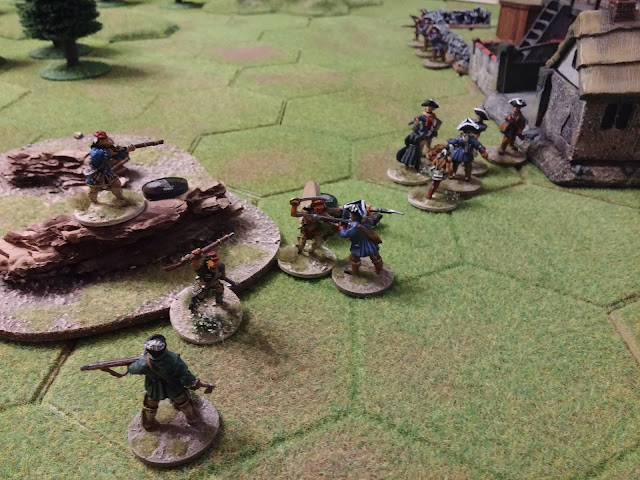 The Provincial's Officer was having none of it he slapped the Priest across the face, grabbed him and hauled him back into the Inn, winning the game.  The British Sergeant attacked his outnumbered opponent and just like last week ended up on the ground.   The rest of his force engaged in inconclusive skirmishing with their enemies. 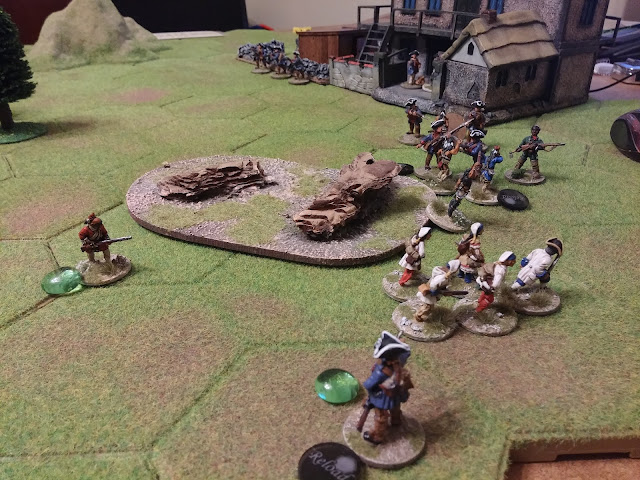 To be honest this was the third time we'd played this scenario.  The first two occasions were on a smaller board and both the Indians and French started off the board.  The French came on after the patrol crossed the third hex and the Indians came on after a scoring equal to or under the current turn number starting in turn two.  They would come in on either board edge, chosen before the game began.  This didn't give too much of a game with the patrol easily outstripping its pursuers.  Below are a few photos from these earlier games:-

The Indians making use of their Woodsman ability and in Indian File. 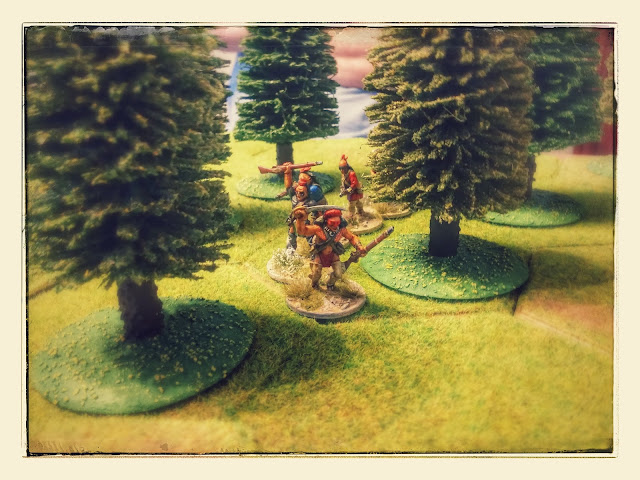 The patrol outpacing their French pursuers. 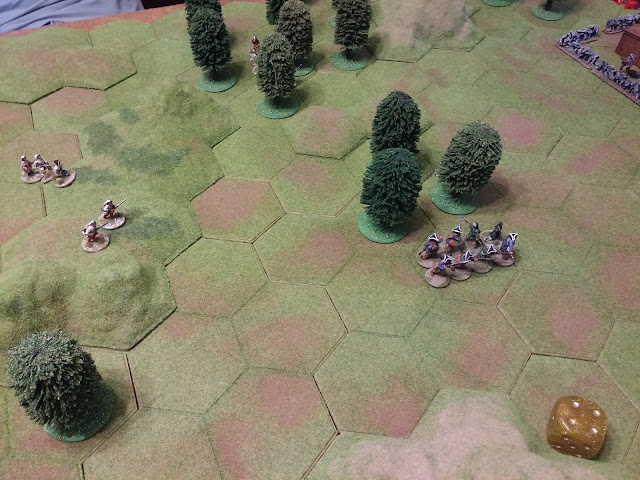 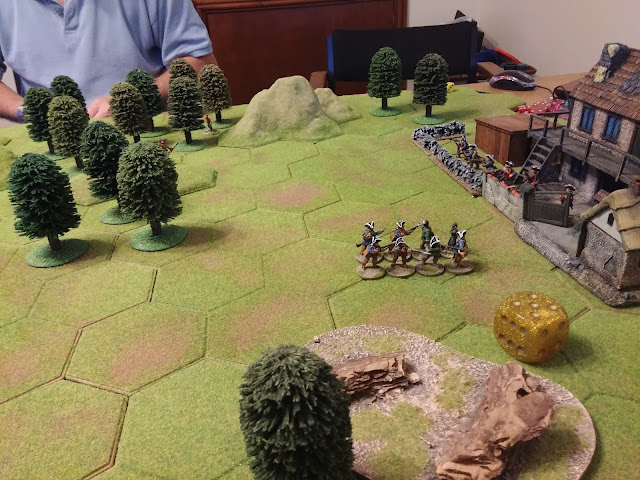 The French scatter to fire on the patrol. 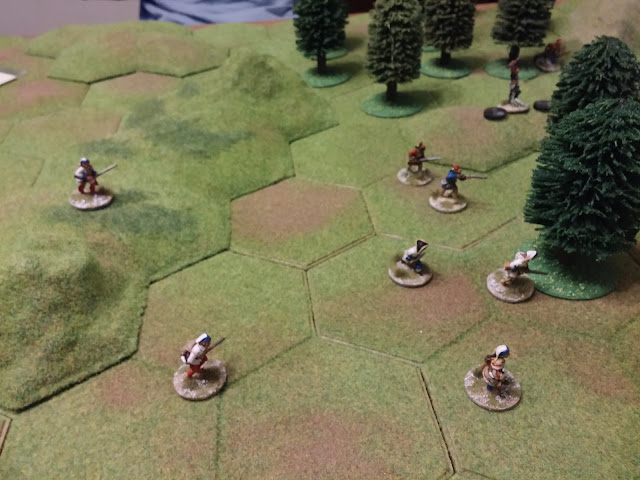 In the second game the patrol was outguessed by the Indians and had to double back to avoid them. 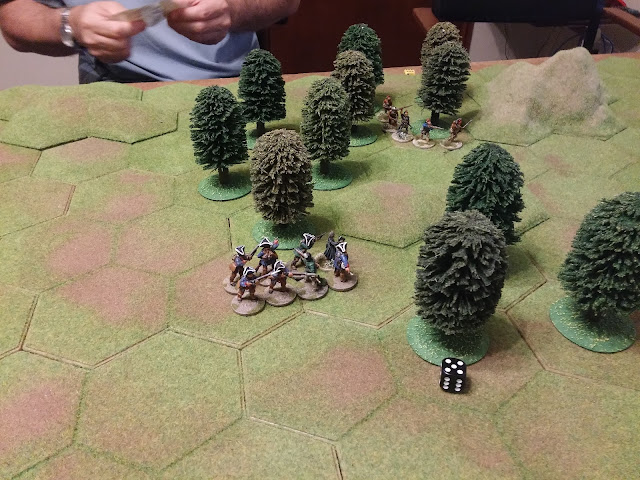