For me this is the classic incarnation of the Masters of Evil and I still have the Avengers comics where they battled the Avengers and a group of them put Hercules into the Hospital.

Power Absorption Tricks:
The character may absorb the strength of an inanimate object.  When adjacent to an object the character may spend one action then roll its Power Absorption die versus the material strength of the object if the character succeeds one of his traits becomes equal to the strength of the object.  The character retains the enhanced Trait until he rolls a one when using it or is Stunned, Transfixed or can be ordered to drop the enhancement when Mind Controlled.  This trick can be taken multiple times to affect more than one trait.  Traits which can be enhanced are Strength, Knockout and Armour.

For example Crusher carries a wrecking ball with d10 strength.  When he uses his Power Absorption power on the ball his Strength, Knockout and Armour becomes d10. 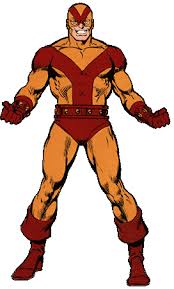