In searching for new worlds to conquer the Crime Syndicate of America has found a potential victim.  A reconnaissance team has been formed of Superwoman, Atomica, Sea King and the formidable Grid and sent through to the other dimension.  This was made easier by a group of scientists on their target trying to make contact with other dimensions.  The unlucky scientists have now all been dispatched and the CSA team are surveying the city from the roof of the laboratory.  The world they have found is Earth 616 otherwise known as the Marvel Universe.  The Leader and his newly formed gang, comprising of Whirlwind, Blizzard, Klaw, Bulldozer and Piledriver have arrived with the aim to steal the dimensional gate technology and now find themselves the unwitting champions of their world.

I did more prep for this game and decided to use all the rules including Aces and Fate:- 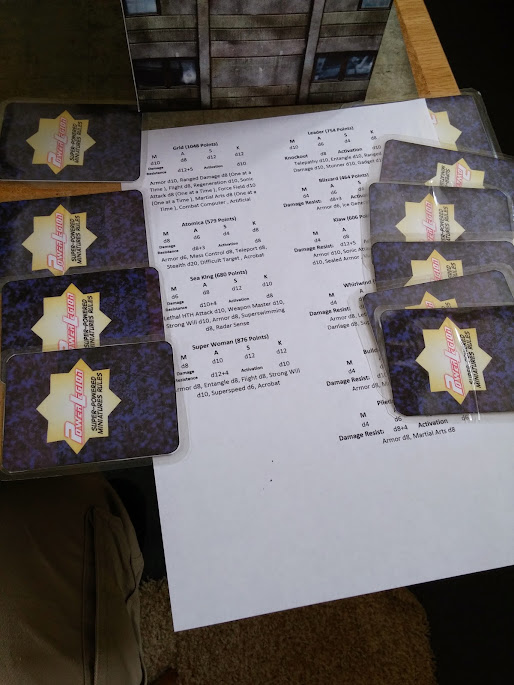 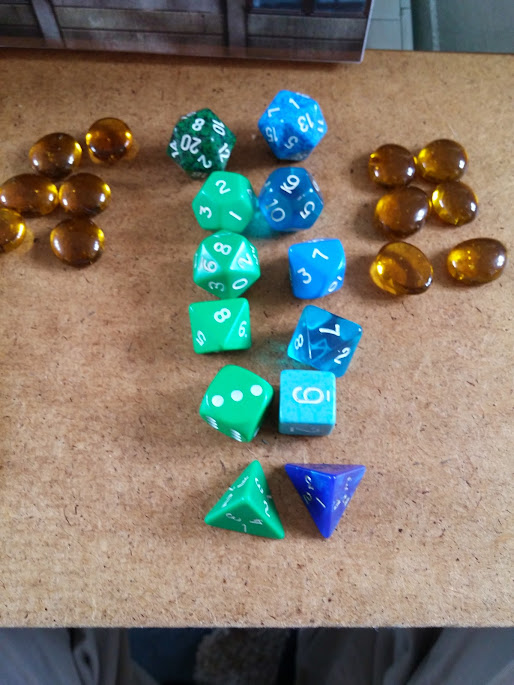 I also decided my hex terrain didn't really cut it so I printed off some paper office buildings and used a pair of Ainsty Castings shop fronts on a Mars Attacks mat.  Annoyingly I couldn't find my urban scenery so I placed a police van in the middle of the street.

Initiative, both sides roll a d10.  The Leader’s Team rolls a 4 and  the CSA an 8.  The CSA seize the initiative and attack.

This is the position before the game starts. 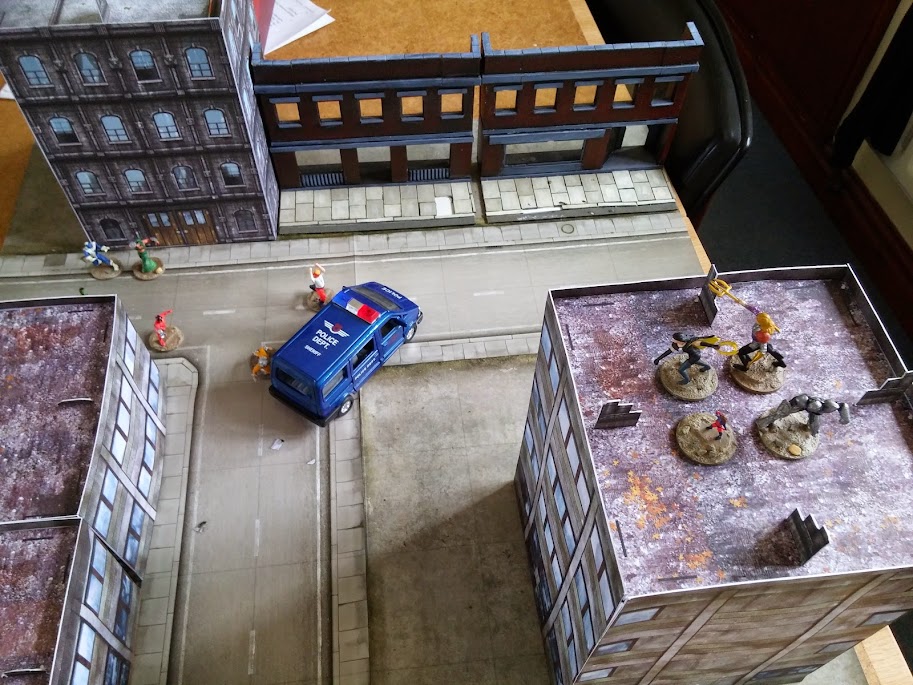 A closer shot of the Marvel villains. 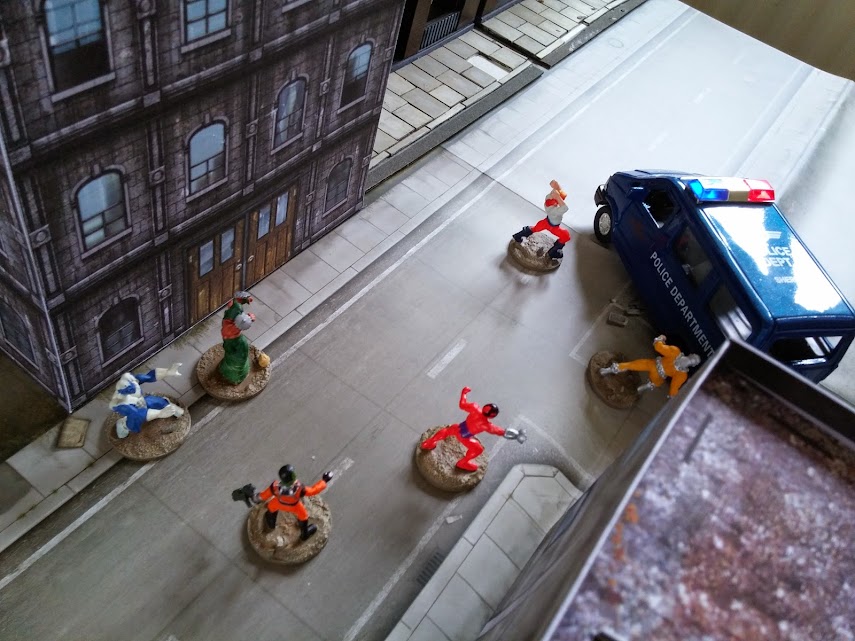 Grid goes first with three actions.  He picks up Sea King and flies him out over the edge of the building and drops him onto Bulldozer.  He then lands on a nearby building roof and seeing the Leader as the main threat fires a laser bolt at him.  The Leader easily side-steps the shot.  As he falls Sea King lifts his trident in an attempt to skewer Bulldozer with a powerful thrust aided by his momentum.  He strikes Bulldozer but by a fluke his weapon bounces from Bulldozer’s helmet.  Superwoman and Atomica argue about their strategy and there is a turn-over.

The Leader takes aim at Grid and fires a couple of quick shots, the first misses, the second hits but does no damage.  He then plays an Ace, Rapid Fire, uses Fate to boost the damage and fires again. The shot hits and scores a direct hit, Grid’s armour buckles but he survives the hit.  Whirlwind speeds towards Sea King, who is locked in combat with Bulldozer and using his wrist blades slashes at the CSA member.  The blades glance off Sea King’s armour.  Seeing the Grid is distracted, Klaw takes a sneaky Sonic shot at him, Grid manages to resist the effect.  Blizzard tries the shoot the Grid but instead there is a turn-over. 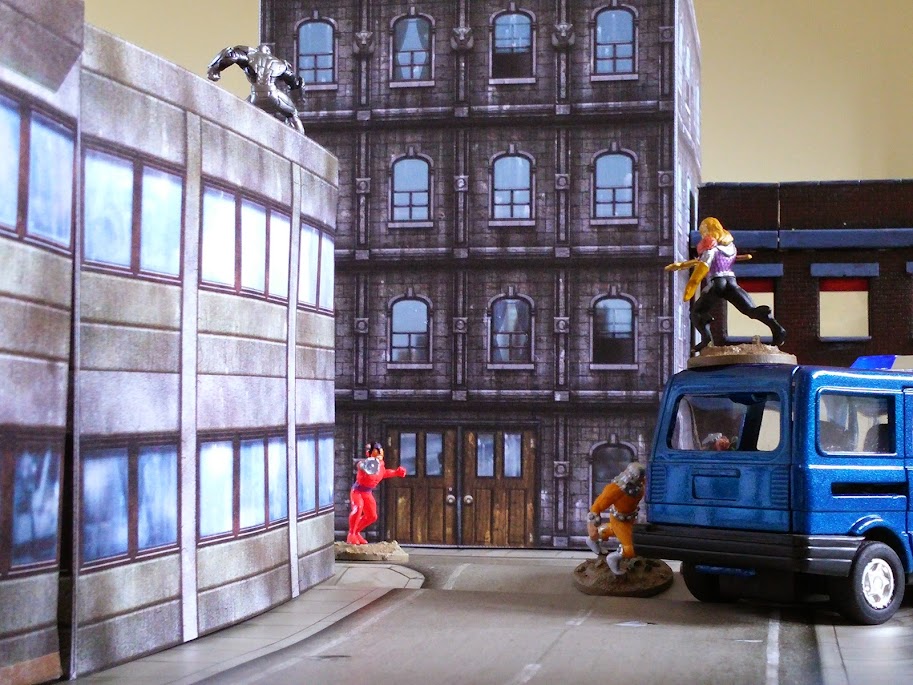 The Grid, discomforted by Klaw’s attack fires a Sonic attack back at the villain but misses.  Superwoman, ignoring Atomica flies down from the roof aiming to punch Piledriver.  She strikes him only a glancing blow.  Atomica teleports onto the building above Blizzard and increase her mass.  Her strength becomes d6 and she has Immobile d4.  Finally Sea King tries to impale Bulldozer.  He hits but the blow is soaked by Bulldozers armour.

Seeing his chance to alter the flow of the battle, the Leader uses his Mind Control Power on Superwoman.  He enters her mind and using fate to strengthen the effect Distracts her.  Whirlwind spinning wildy delivers two powerful blows with his blades to the Sea King.  Sea King manages to avoid damage from either blow.  Blizzard takes a snap shot at the Grid but misses.  Bulldozer delivers a power blow to Sea King and then a swift follow-up.  Sea King hardly seems to notice the impact.  Piledriver tries to strike Superwoman with a power blow but opens himself up to a riposte which winds him and sends him staggering. 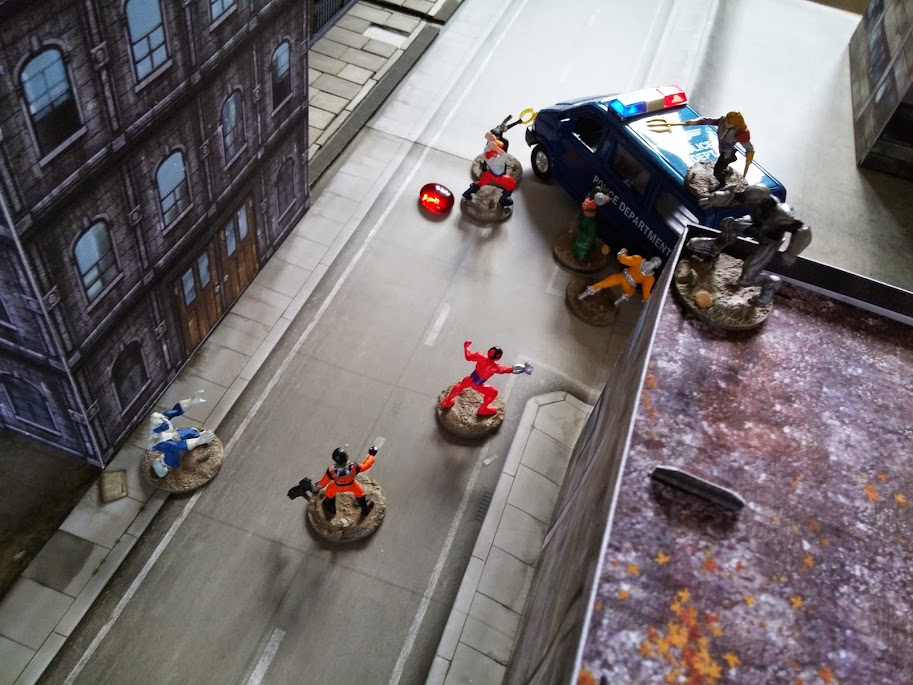 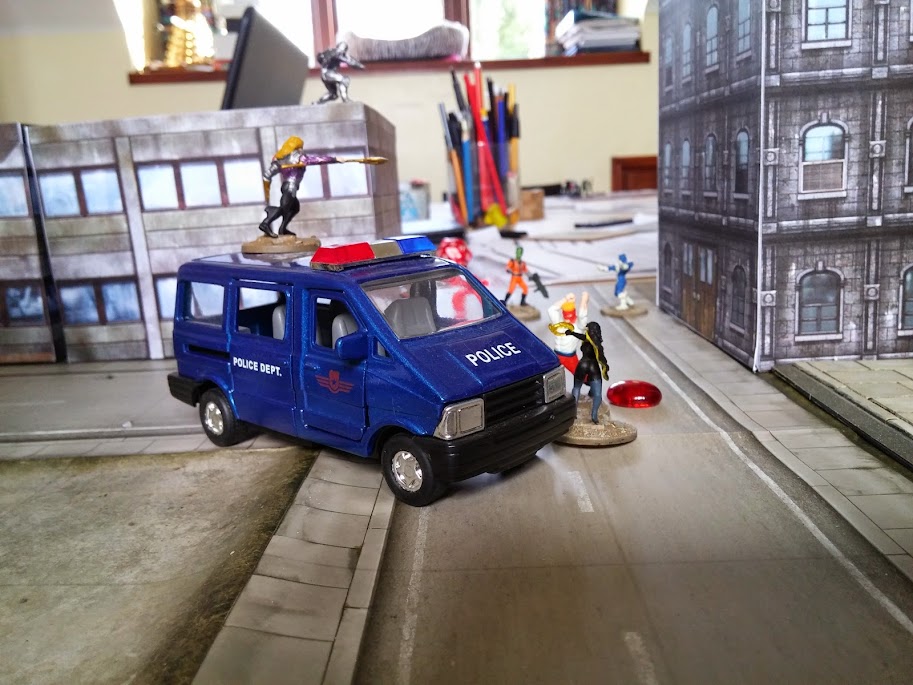 Superwoman aims to follow up her success, she tries a powerful attack to finish Piledriver, the ground shakes as her Hulk-like blow staggers him again.  Desperately weak now Piledriver manages to bypass Superwoman’s defences as she tries to finish him but as weak as he is he doesn’t harm the super-villainess.  The Grid fires a beam at the Leader again but only the Leader’s pride is harmed.  Sea King seeing Whirlwind as the greater threat attempts to skewer him with his trident.  The aquatic villain overstretches and Whirlwind slashes him across the chest but the result is only ripped uniform.  Atomica increases her strength once more her strength is now d8 and she has d6 Immobile.

Piledriver succumbs to Superwoman’s fists and falls unconscious to the ground.  The Leader fires two shots at the Grid and hits once but with no effect.  With blinding speed, Whirlwind slashes at Sea King, his first flurry of blows allow Sea King to stab at him and his second results in him being sent staggering back, bleeding from a trident thrust to the chest.  His final attack scores at hit on Sea King but he is only scratched.  Klaw sends another Sonic wave at the Grid distracting him.  Blizzard fires two icy blasts at Superwoman but she shrugs off the effects.  Bulldozer picks up the van in front of him and launches it at Sea King who nimbly sidesteps and the van flies on into the laboratory building. 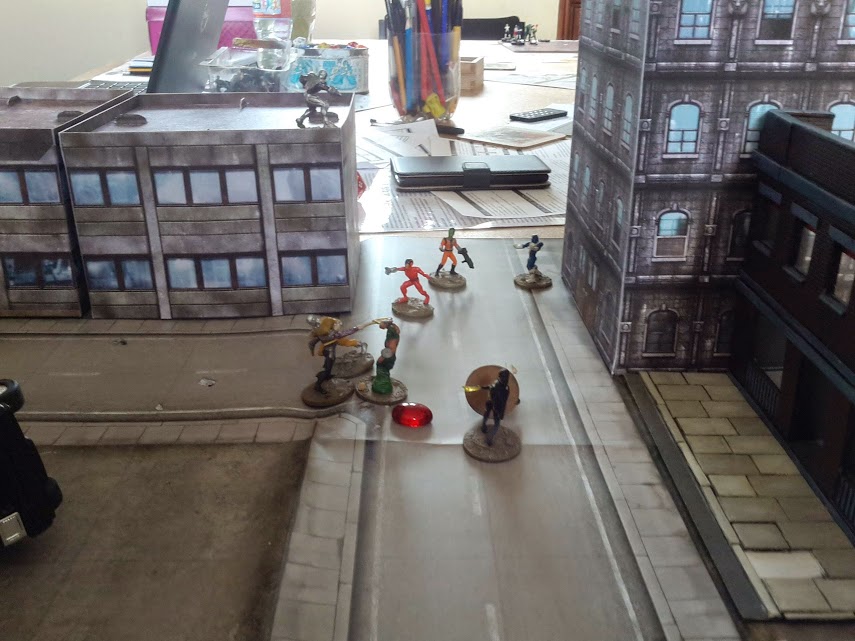 Superwoman flies up and lands next to the Leader and swings a punch at his oversized cranium.  Surprisingly she missed and the Leader is able to deliver a feeble punch, which she does not even feel.  The Grid stumbles and there is a turnover.

Whirlwind suddenly realising he’s bleeding collapses to the ground.  The Leader using his Mind Controller tries to take over Superwoman’s mind and succeeds, he sends her flying up to attack the Grid.  The force of her attack sends the Grid staggering but her second has no effect and then the Grid manages to strike back sending her flying backwards.  Klaw’s sonic blast and Blizzard’s ice bolt both misses again.  Bulldozer summons up all the resolve he can and tries to head butt Sea King but is unable to harm him.

The Grid’s systems, having suffered major damage from Superwoman’s blow, short circuits and he shuts down.  Sea King stabs at Bulldozer but is punched instead.  Atomica having suddenly seen things go very badly wrong teleports down to attack the Leader, in an attempt to break his hold over Superwoman.  She opens herself to a kick from the Leader but he is so feeble he is unable to hurt her.

The Leader calls on Superwoman to defend him whilst using a Gadget as a Lethal HtH on Atomica who dodges out of the way.  Klaw moves into hand to hand with Sea King with the aim of using his Sonic power next turn, Blizzard doesn’t move as he rolls a turn-over. 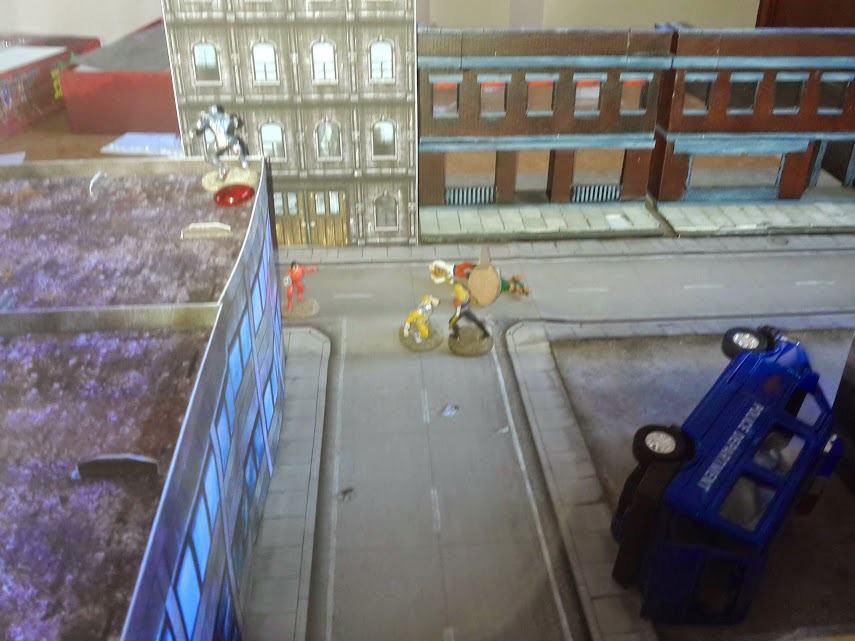 Sea King stabs at Bulldozer, but doesn’t harm him then tries to deliver a mighty blow to Klaw but misses.  Atomica manages to knock the Leader down but he manages to maintain control of Superwoman.

The Leader stands back up and takes a shot at Atomica but she shrinks out of the way.  Klaw rolls a turn-over. 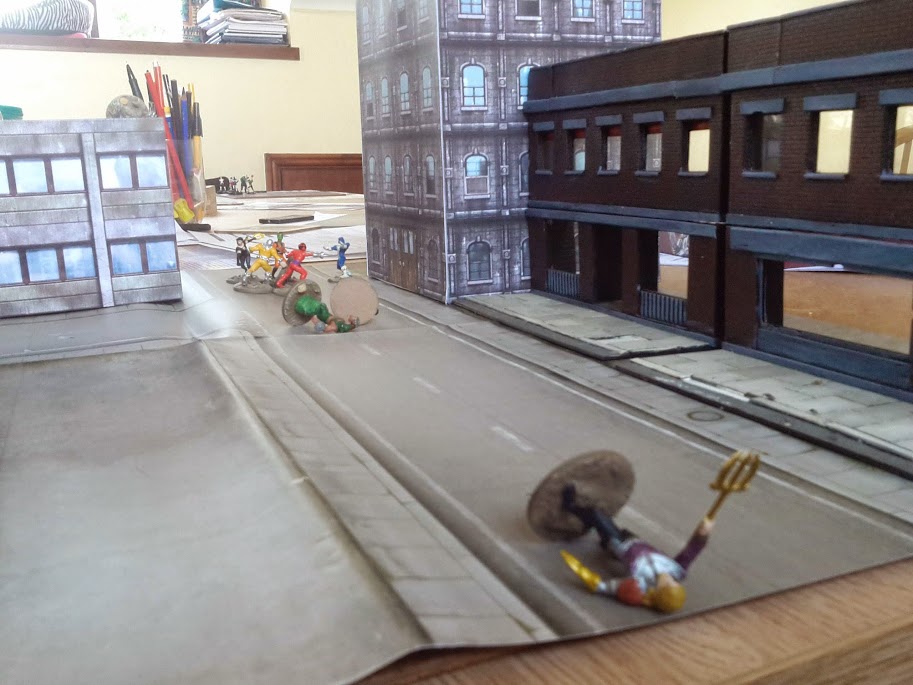 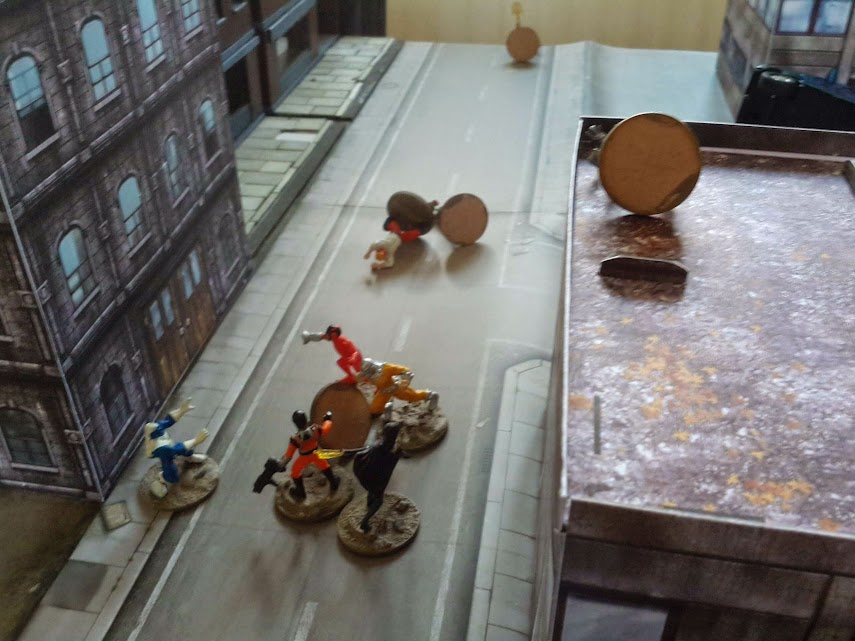 Sea King realising that unless the Leader is taken down Superwoman will beat him senseless when she gets back he uses his Ace to gain Slippery and runs into contact with the gamma irradiated villain.  Atomica grows into combat punching at the Leader but does nothing.

The Leader calls Superwoman back who swoops in and using a power attack strikes Sea King knocking him backwards to the other end of the street.  Klaw moves back into contact with Atomica and Bulldozer puts his head down and charges her in the back delivering a direct hit knocking her out.

Sea King regaining his feet charges at the Leader.

The Leader grins and orders Superwoman to attack whilst firing his rifle at Sea King.  His second shot knocks Sea King down and Superwoman flies down and delivers a blow.  She strikes him but his armour saves him from harm.  The rest of the Leader’s team race to take advantage of the Sea King’s plight. 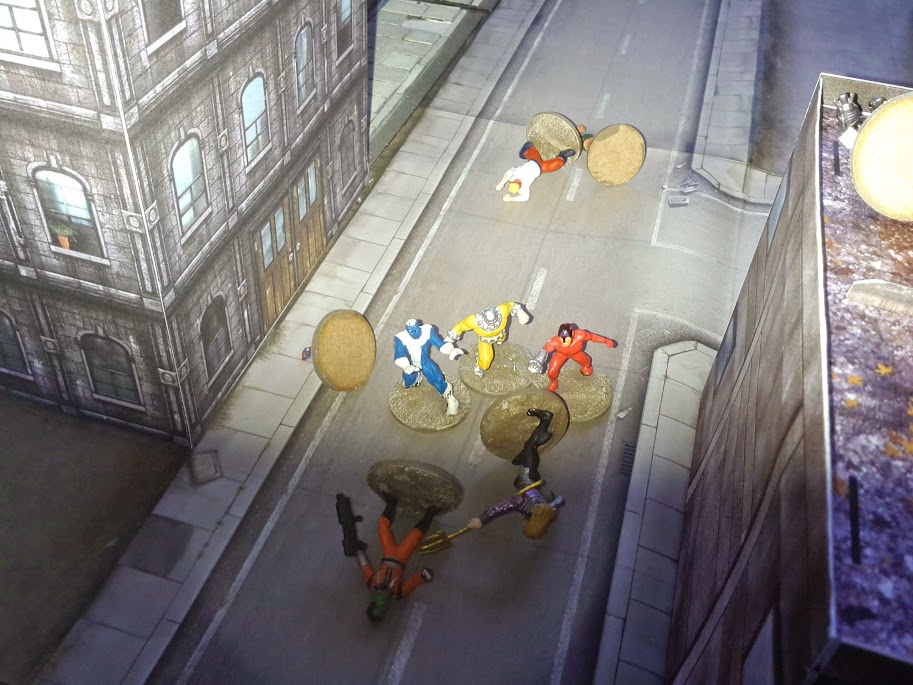 Sea King regains his feet and moves towards the Leader with grim determination.  Superwoman gains a free hack as he passes but misses.  As does Bulldozer but is parried.

The Leader calls Superwoman back to defend him whilst trying to slow down the Sea King with his Entangle ability but misses.  Superwoman flies back but Sea King reacts too quickly and knocks her back.  His confidence turns to fear as he screams at the other villains to protect him.  Klaw runs back into contact but can’t do anything else and Bulldozer charges Sea King striking him but doing no damage.  Blizzard moves back as well but doesn’t harm Sea King.

Grinning ferociously Sea King uses both hands to powerfully drive his trident at the Leader, he strikes a direct hit and knocks the Leader out, breaking his hold on Superwoman.

Klaw using his Sonic gun and calling on Fate shoots Sea King and knocks him out.  The other villains brace themselves for the return of Superwoman.

Superwoman flies back in her fury reflected on her face.  She swoops down to finish the cowering villains.  Only to have Bulldozer use his Clothesline Ace but he misses.  She strikes at Bulldozer calling on fate for help but only receives a blow from the villain for her trouble.

Klaw uses his Sonic gun but misses.  Bulldozer tries an attack but is staggered by Superwoman’s riposte.  Blizzard shoots ice over Superwoman but she easily smashes her way free.

Superwoman strikes out at Blizzard but his armour soaks the damage.

Bulldozer manages to clear his head but rolls a turnover. 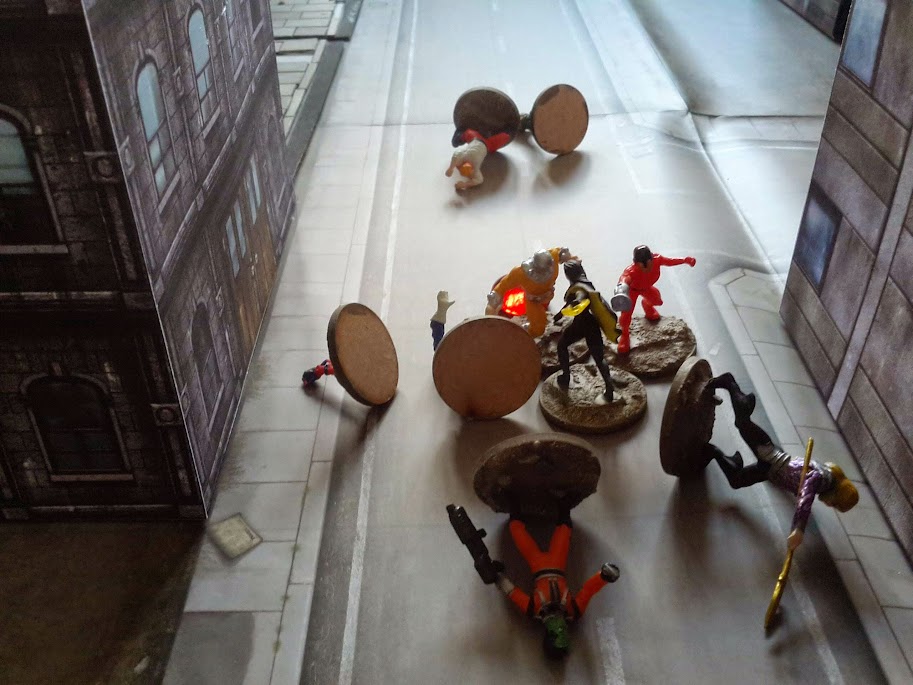 Superwoman makes a power attack on Blizzard delivering a direct hit which knocks him out.

At that point the remaining villains surrendered.  Superwoman gathered up her fallen comrades and returned to her own dimension with tales of a world best conquered, at least initially by stealth.


The stats I used were as follows.  The Marvel villains had a points advantage but Superwoman and the Grid were much more powerful than any of the Marvel characters.