Having booked a couple of days off I thought I'd give Ganesha Games Power Legion another play.  I'd been enthusiastic enough to buy a pile of heroclix from Troll and Toad, in small enough batches for Customs not to pay any attention.  My main aim had been to accumulate the figures for Baron Heinrich Zemo's Masters of Evil.  So here they are, from left to right, the Executioner an Asgardian and bodyguard to The Enchantress an Asgardian beauty and sorceress, Baron Zemo, the Radioactive Man, the Melter and the Black Knight. 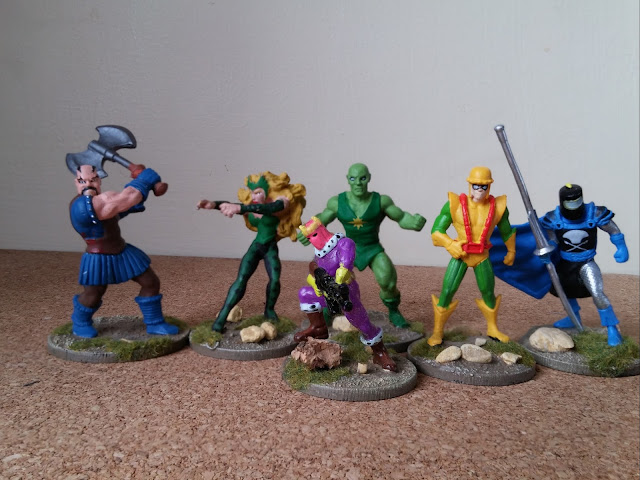 I also wanted to collect the Avengers to fight them and here they are.  From left to right, Iron Man, Thor, Captain America, Giant Man and the Wasp. 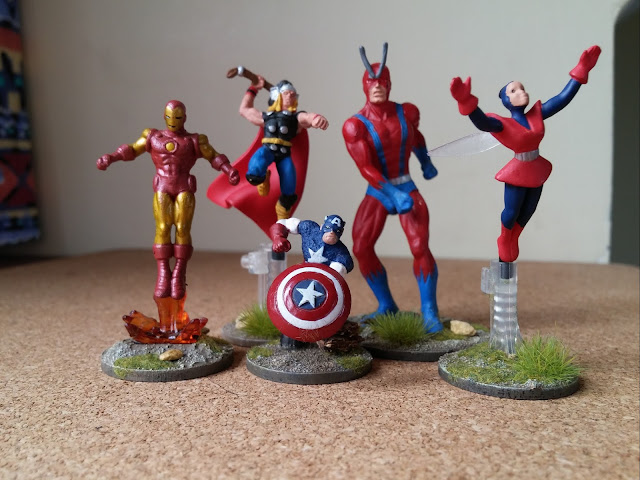 The board was set out on four deluxe Mars Attacks rubber mats.  These were dressed with some paper buildings, mdf buildings, vehicles and some other bits. 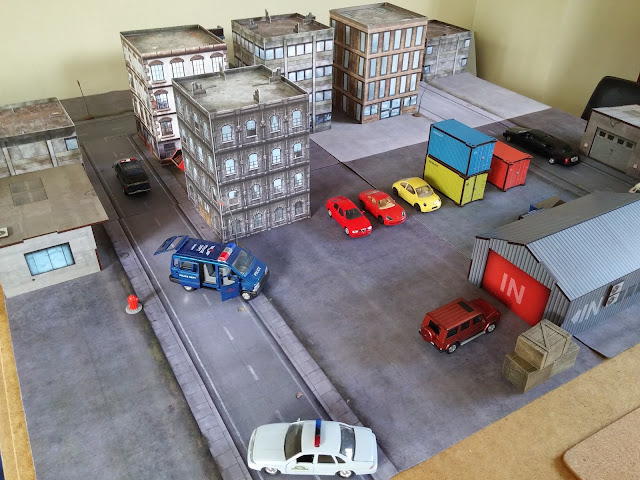 The stats I used were:-
A glowing meteor has broken up over the city, showering one neighbourhood with radioactive fragments.  Baron Zemo had long watched this meteor and had anticipated its landing.  He and his Master’s of Evil have arrived just after the neighbourhood has been evacuated and they are now busy collecting as many of the fragments as they can.  The Avengers are not far behind...

The aim of this scenario is for one side to collect more fragments than their opponents and exit the board from their entry point.  To collect a fragment a character must move adjacent to it and spend an action to collect and store it safely.  The Wasp can collect and carry fragments but if she does so she can only use her ranged attack power none of her other powers will work as she is unable to shrink.  The Radioactive Man can destroy a fragment he is carrying to gain a one off use of the Boost power.  Friendly characters can swap as many fragments as they like by one of them spending a single action and fragments can be retrieved from a fallen foe by spending one action in base to base contact.
The Masters of Evil start in the centre of any edge of the board and the Avengers start on the centre of the opposite board edge 1d4 turns later. 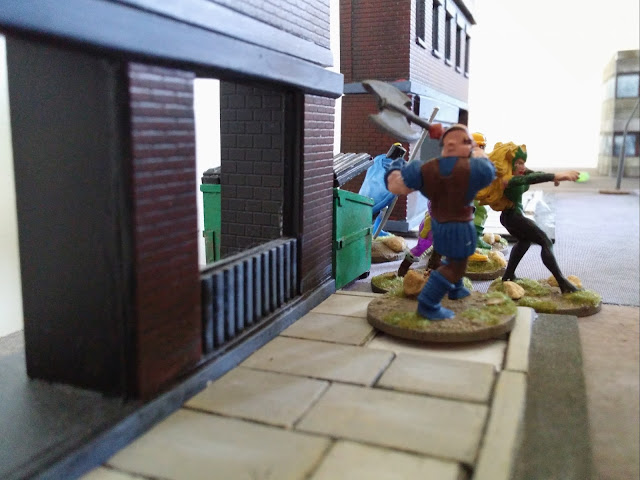 Baron Zemo quickly evaluating the situation sends the Black Knight off to collect the first fragment from the top of a building.  The Radioactive Man sensing a fragment by its emanations races off to gather the precious rock.  The Executioner momentarily reluctant, hesitates and needs Zemo’s Leadership to send him running of to gather a fragment.  The Melter cautiously sets off to the centre of the neighbourhood where most of the fragments have fallen.  The Enchantress acting more boldly than was normal Teleports to a further fragment and Baron Zemo in an effort to keep as many of his team in LOS moves past the Melter so he can encourage both the Enchantress and the Melter. 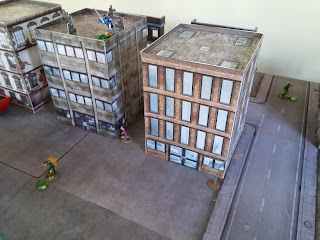 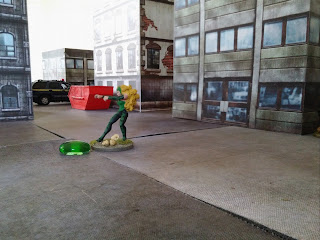 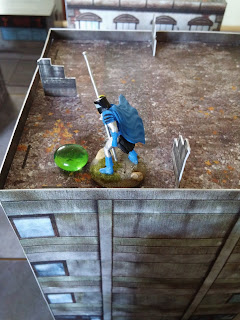 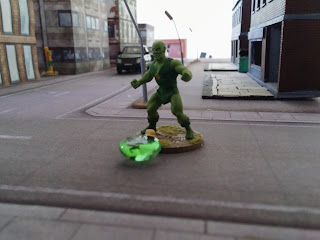 With no sign of the Avengers the Masters continue their efforts.  The Black Knight collects his second fragment.  The Enchantress quickly pocketing a fragment Teleports back towards a fragment close to the Radioactive Man but on top of a building out of his reach.  The Melter runs out into the open towards another rock and the Executioner picks up a stone and jogs down the road towards another.  Finally the Baron moves into the lee of a shipping container and prepares to scale it to gather a fragment.

The Heroic Avengers finally make an appearance.  It’s the tactical skills of Captain America versus the cunning of the Baron to see who reacts first and the Baron wins (4 vs 2).  The Masters prepare to withdraw with their prizes.  Greed gets the better of the Baron and he hoists himself up onto the container to collect yet another fragment.  The Melter momentarily surprised by the heroes arrival, quickly recovers and fires two shots at Thor.  The Thunder God avoids both easily.  The Black Knight is even more surprised and only Baron Zemo’s Leadership goads him into action but his single shot also misses Thor.  The Enchantress Teleports onto the roof of another building and collects the last fragment the Masters need for victory.  The Radioactive Man sensing victory turns and heads back for the exit, stopping short and raising his forcefield.  The Executioner reluctantly turns and moves back. 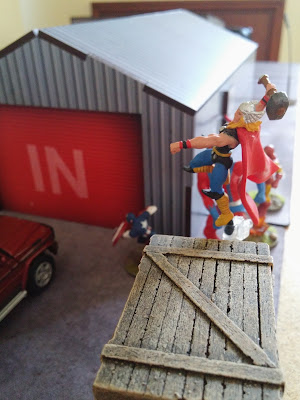 Seeing prompt action is needed Thor flies towards the Black Knight, landing short he hurls Mjolnir at the villain.  The hammer flies past the Knight and returns the Thor’s hand.  Giant Man needs Cap’s leadership to prevent him doing nothing.  He strides boldly towards the Melter, shielding a fragment from him.  Vaulting onto a car Cap throws his shield at the Melter, only luck causes it to miss. Quickly assessing the situation, Iron Man flies off at top speed to intercept The Enchantress.  She is faster than him and dodges both his shots.  Wasp flies off to try to stop Zemo.  Her sting strikes home but Zemo is able to shake off the effect. 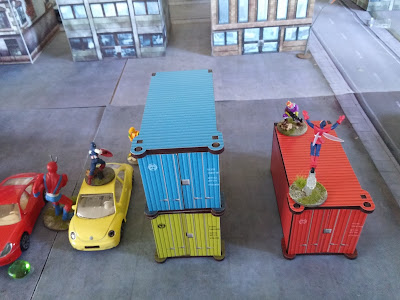 Zemo fires his Blaster at The Wasp but she flies out of his way.  Seeing discretion is the better part of valour, Zemo grabs the nearby rock and jumps down from the container.  With seven of the ten fragments in their control all the Masters have to do is escape.  The Enchantress offended by Iron Man’s attack turns and smiles and weaves a magical telepathy spell but Tony Stark is too clever to be controlled.  The Black Knight flies back towards the exit.  Desperately wanting to stay in the fight, The Executioner slowly makes his way back towards the exit.  The Melter fires his beam at Giant Man he hits, but his attempt at a Knockout Blow fails to down the Avenger. 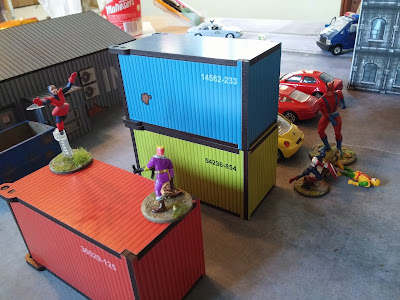 Captain America leaps down and engages the Melter.  His powerful attack easily bypasses the Melter’s ineffectual flailing but the blow is only glancing.  Giant Man needs Caps Leadership to allow him to move up and attack The Melter.  He strikes the distracted villain and delivers a knockout blow, only fate prevents him from falling.  Iron Man fires his repulsors at The Enchantress, but her Asgardian physique means she can shake off the damage.  Thor flies down in pursuit of the Black Knight, knowing that if he can stop him the villains cannot win. 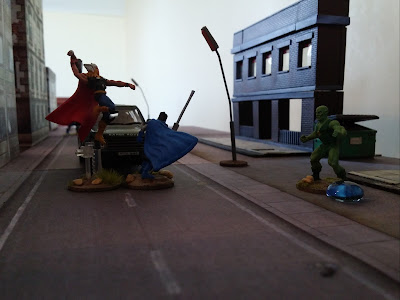 Seeing the writing on the wall, Zemo runs back towards the exit desperate to escape.  This proves fortunate as the Black Knight panicked by the mighty Avenger chasing him almost does nothing.  Spurred on by Zemo’s cajoling he urges his winged steed forward, opening him up to a free attack from Thor.  Hoping fate would save him the Black Knight boosted his Weapon Mastery but Thor swatted his lance aside and struck him a solid blow that the Black Knight’s fate boosted armour could not stop but fortune intervened at the last and the Black Knight did not succumb to Thor’s blow but after all he couldn’t quite reach safety.  With a supreme effort the Executioner dashed back to engage Thor and save the Black Knight.  Self preservation got the better of the Enchantress and she Teleported from the field of battle securing two fragments for the bad guys.  The Radioactive Man needed Zemo’s Leadership again but he momentarily dropped his Forcefield and fired a radioactive ray at Thor, which missed. 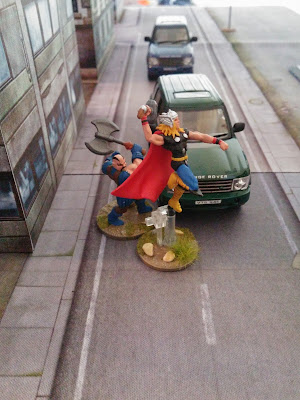 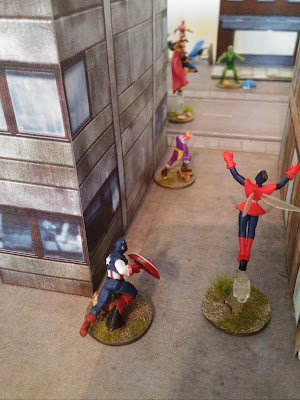 Cap realising that the Melter was simply a distraction raced after Zemo, exposing himself to an free attack from Melter.  Surprisingly the villain managed to strike Cap but the first Avenger never felt the feeble blow.  Not for the first time in this battle the Avengers luck was not with them and the shield struck the wall just above Zemo’s head.  Realising the importance of stopping the Black Knight now his original quarry had escaped him, Iron Man fired up his boot jets and flew into hand to hand combat with the villain.  Tony proved not be as skilled a fighter as the Knight but his armour easily protected him from the Knight’s thrust.  Wasp chased after Zemo letting fly with a stinging bolt.  She struck him but her bolt didn’t even slow him.  Giant Man and Melter engaged each other, with Melter ineffectively punching the towering Avenger but then Giant Man’s powerful blow sent the Melter staggering.  Thor flew away from the Executioner who swung at him with his axe.  His first blow missed but he then used a nearby Clothesline (Ace card) to try to entangle the Thunder God.  He was able to take a second free hack but that also missed.  Undeterred Thor swung Mjolnir at the Black Knight using fate to boost the damage and the Knight responding in kind to boost his defence.  The blow proved too much for the villain and he sank to the ground unconscious, just centimetres from safety. 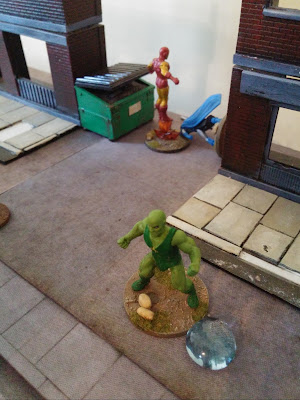 (Thor should have been in base to base contact with the fallen Black Knight at this point but I'd been messing with the figures to get a photo I'd missed and I'd forgotten to move him back.)

The Executioner swinging his axe ran towards Thor and Iron Man, contacting Thor.  The Radioactive Man again, momentarily lowering his forcefield fired radiation at Cap and the Wasp.  The Wasp was staggered by the attack.  Cap took the full force of the attack on his shield and continued running towards Zemo.  Melter staving off unconsciousness for now tried another attack on Giant Man.  The attack staggered Hank.  Zemo ran past Iron Man and tossed a pair of Adhesive X grenade at the Golden Avenger.  The second exploded directly on Tony’s Chest entangling the hero.

Iron Man tried to break free by using his jet boots to melt his way out. The Adhesive proved stronger than he’d hoped and he remained firmly stuck.  Cap ignoring the Radioactive Man, raced after Zemo.  The Wasp flew on and Giant Man slipped giving the villains the initiative. 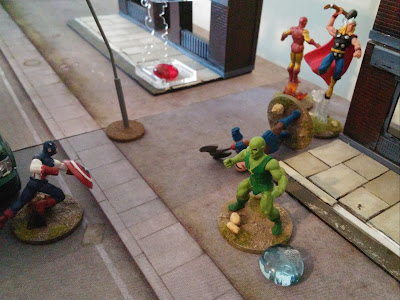 Zemo slipped past the entangled Iron Man, grabbed the two fallen fragments that had so recently been held by the Black Knight and escaped.  Taking the Master’s total to five fragments and guaranteeing at least a draw.  The Executioner summoned all his strength and slashed at Thor.  He managed to get past Thor’s defences but could not harm his fellow Asgardian.  He then moved away trying desperately to escape, attracting a free hack from Thor, knocking the Executioner down.

Giant Man, succumbed to the Melter’s previous attack and passed out.  Cap without enough time to engage the Radioactive Man in hand to hand as he’d prefer, could only throw his shield but the Avenger’s luck was not with him today and he missed again.  Wasp let fly with a sting attack.  She hit but the Radioactive Man’s forcefield held firm.  In trying to do too much even with Cap’s leadership, Thor failed to act (rolled a 2 rerolled using Cap's Leadership and rolled a 1) giving the villains time to recover. 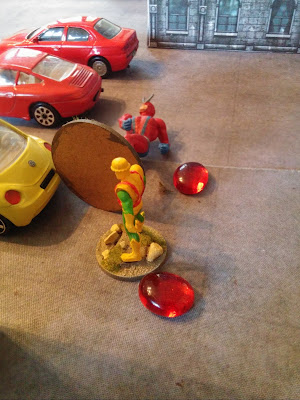 The Radioactive Man taking advantage of the confusion moved past the Avengers and escaped, taking the sixth fragment with him, giving the Master’s a narrow win.