Yesterday, along with a few friends, Steve, his son Peter and Jack went to the Derby World Wargames show at Donington Park.

Whilst the venue isn't quite as good as the University it still features ample free parking and everything is in one huge hall.  We arrived around noon and the show was in full swing.  It was actually busier than I'd anticipated.

One of the first games we took a look at was the Society of Ancients battle of Yarmuk 636AD using the DBA rules.  The figures used were a classic collection of 30mm flats wargame figures from the collections of Tony Bath, Deryck Guyler and Phil Barker.

An overview of the battle, with the Byzantines on the left and Arabs on the right. 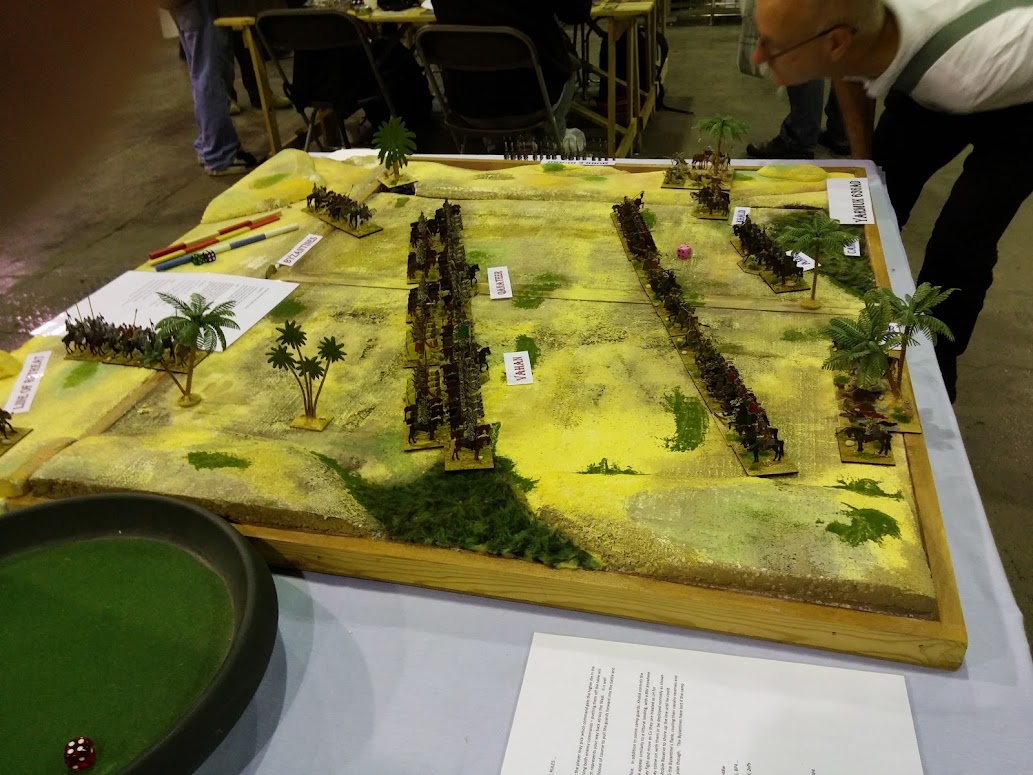 A close up of the Arabic camp:- 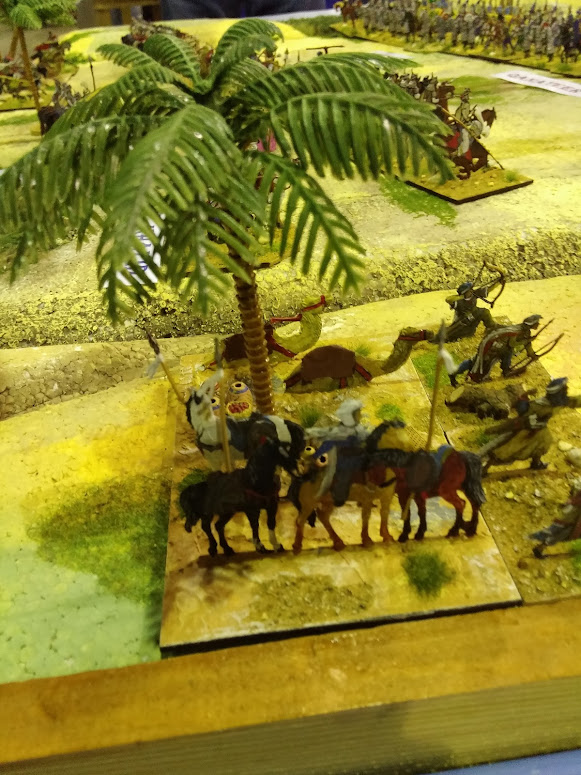 Next on our tour was a recreation of part of the Battle of Beersheba where some Australian Mounted Infantrymen and Light Horse charged the Turkish lines carrying bayonets.

An overview of the battle:- 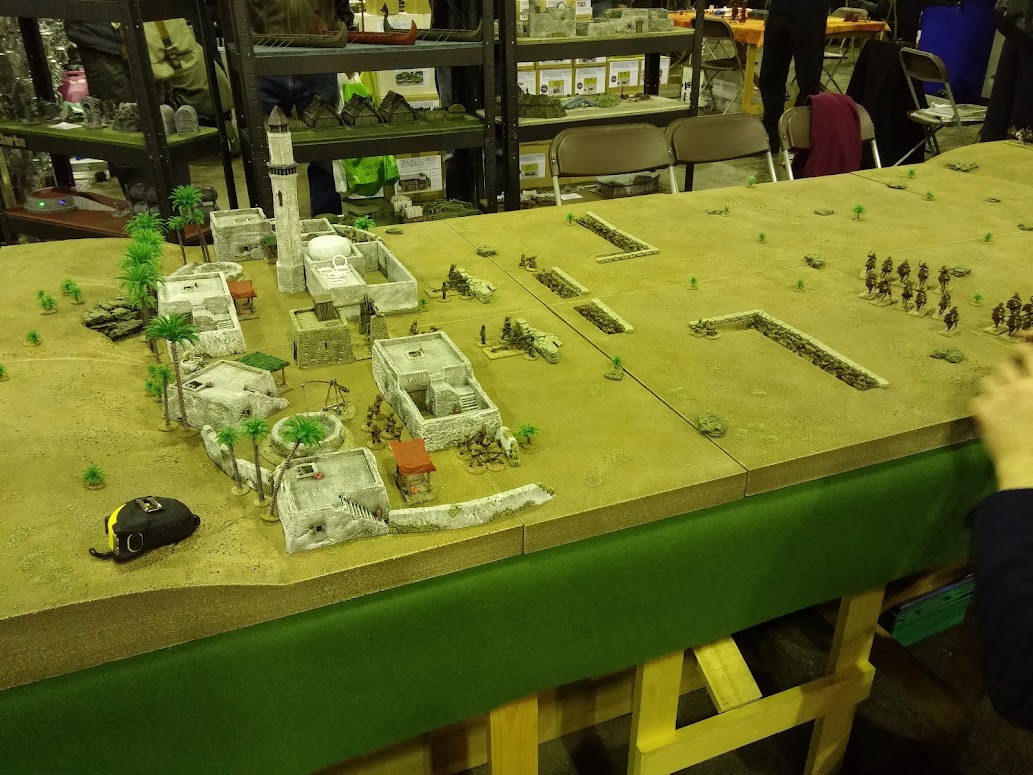 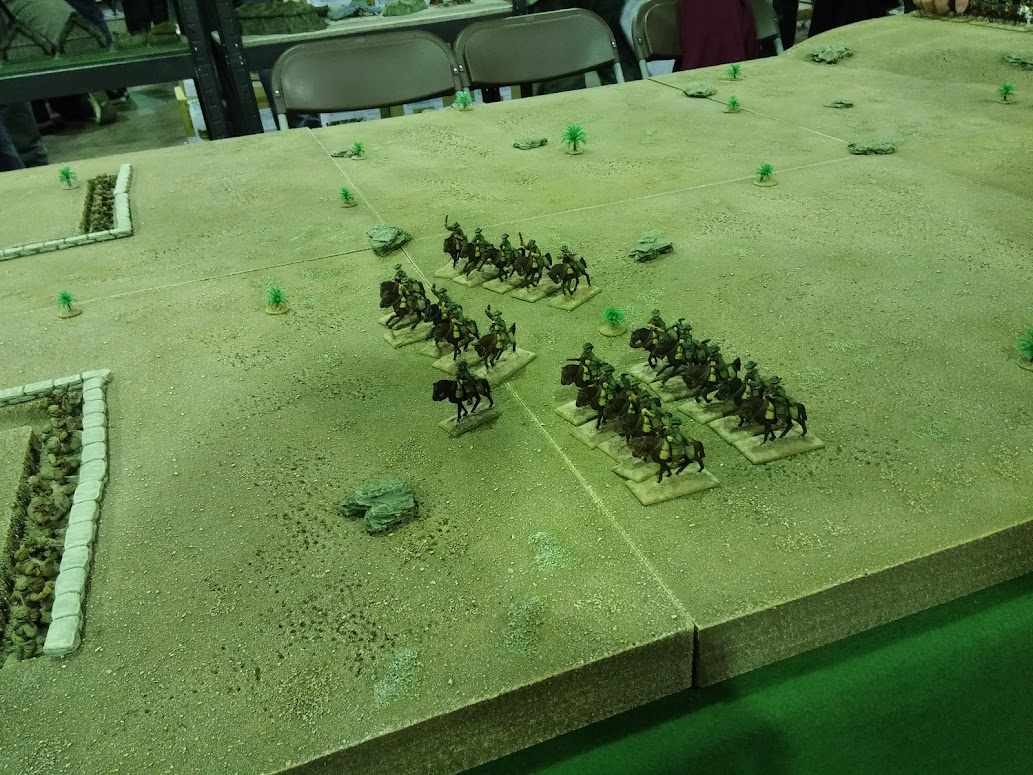 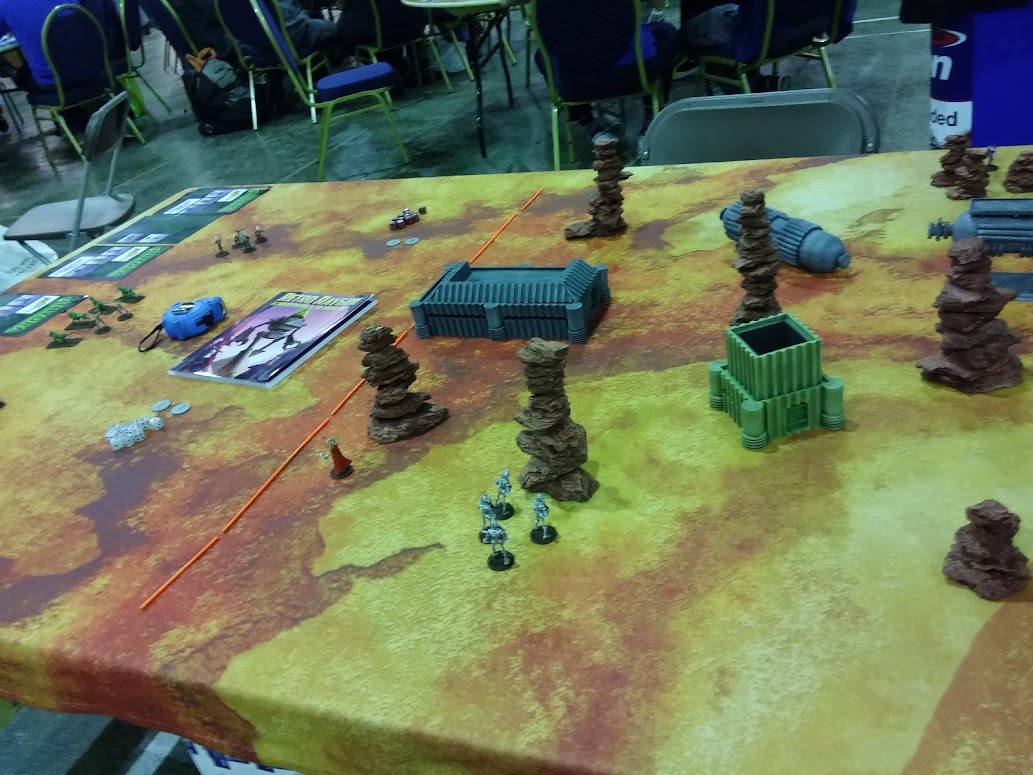 Then a few closer shots.  First of the Robot Legion troops advancing:- 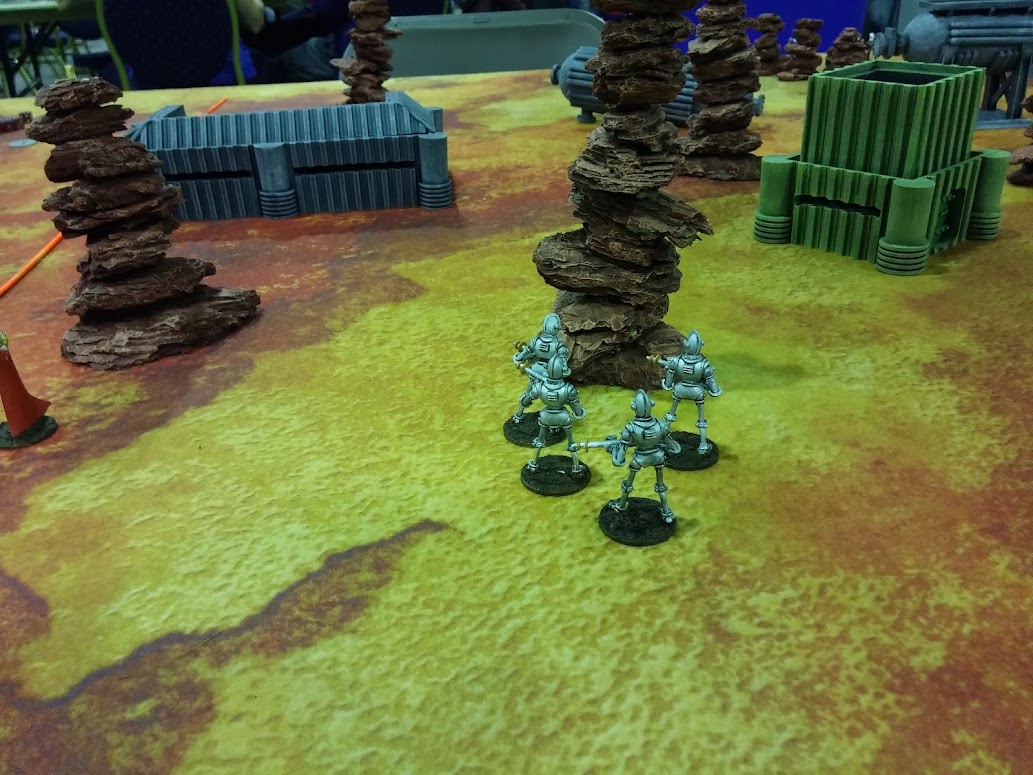 A shot of a Robot Legion Centurion, a Heavy Support Legionnaire and some Minibots:- 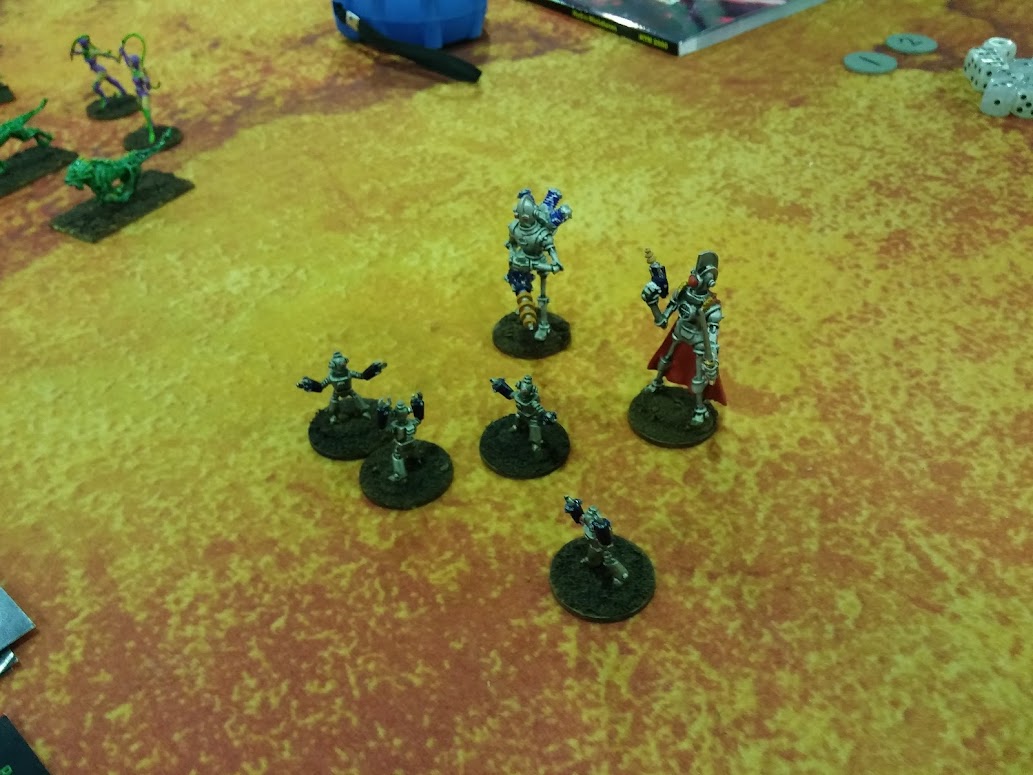 Finally another overview shot from a different angle.  I'd missed the Robot Legion's Queen Mechanika in the middle right of the battlefield. 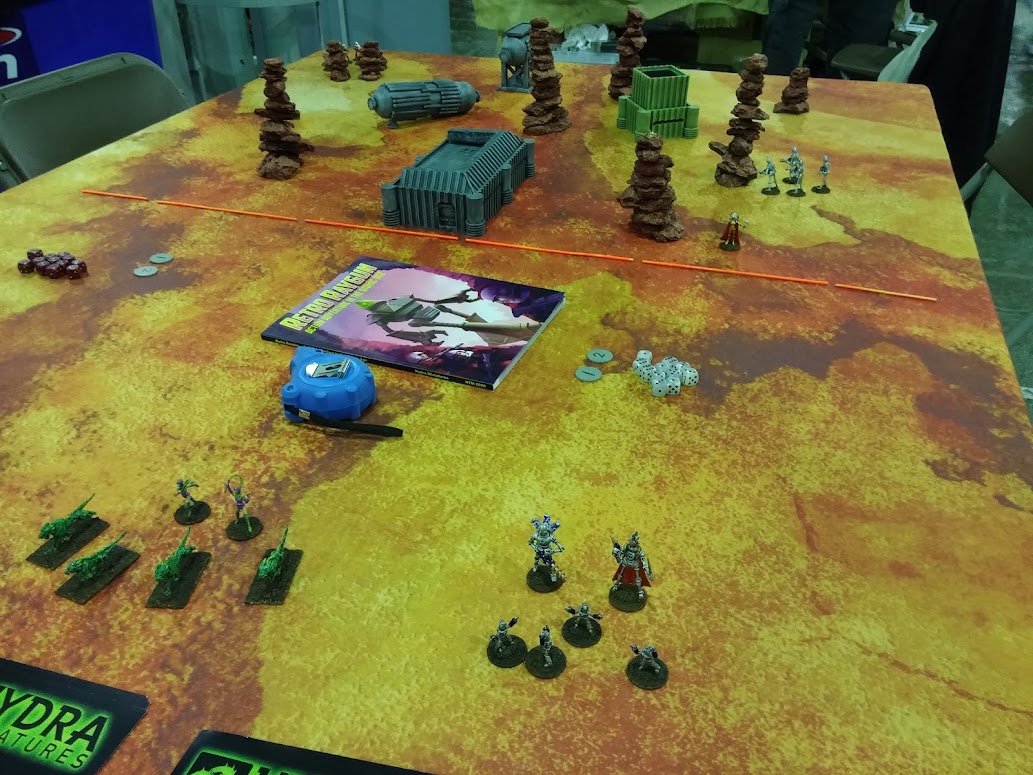 I'm not certain which game the following photo is from but I think it's the Western Desert 1940. 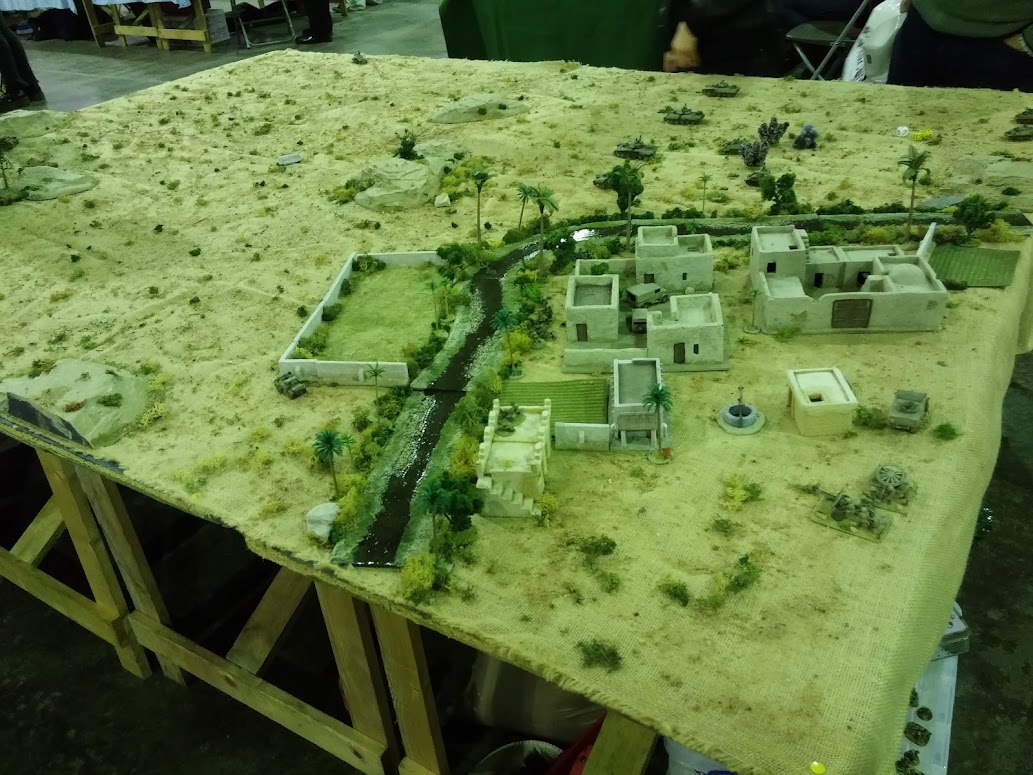 Another good looking game was the battle of the Teutoburger Wald in 9 AD. 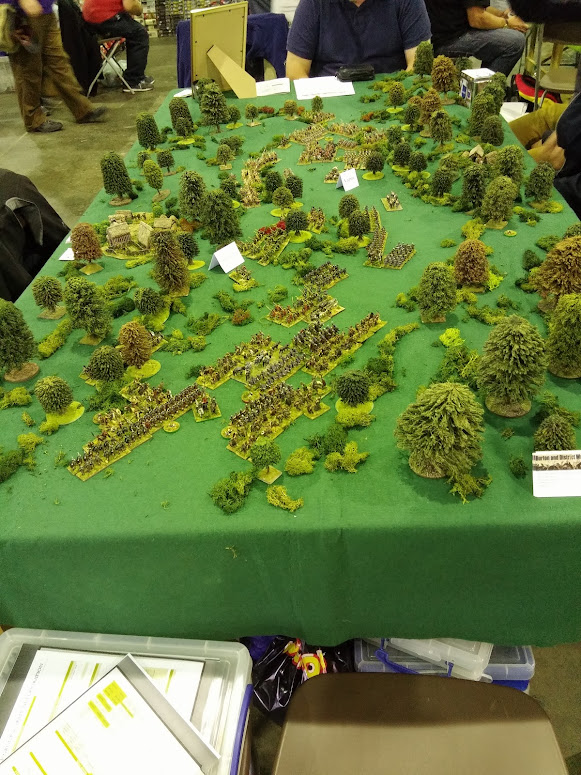 A game making use of electronic lights to represent explosions was the 1944 Battle of Scheldt demo.  I've seen this game at a couple of shows this year and the lights are very effective on the burning LVT Buffalos. 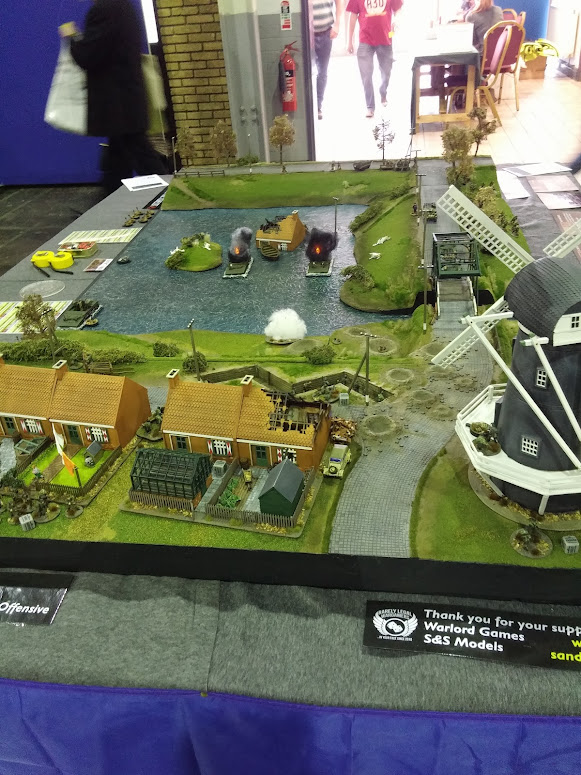 Having aspired to recreate the Battle of the Boyne for some years the Derby Wargames Society: The War in Ireland 1689 - 1691 demo game was especially interesting. 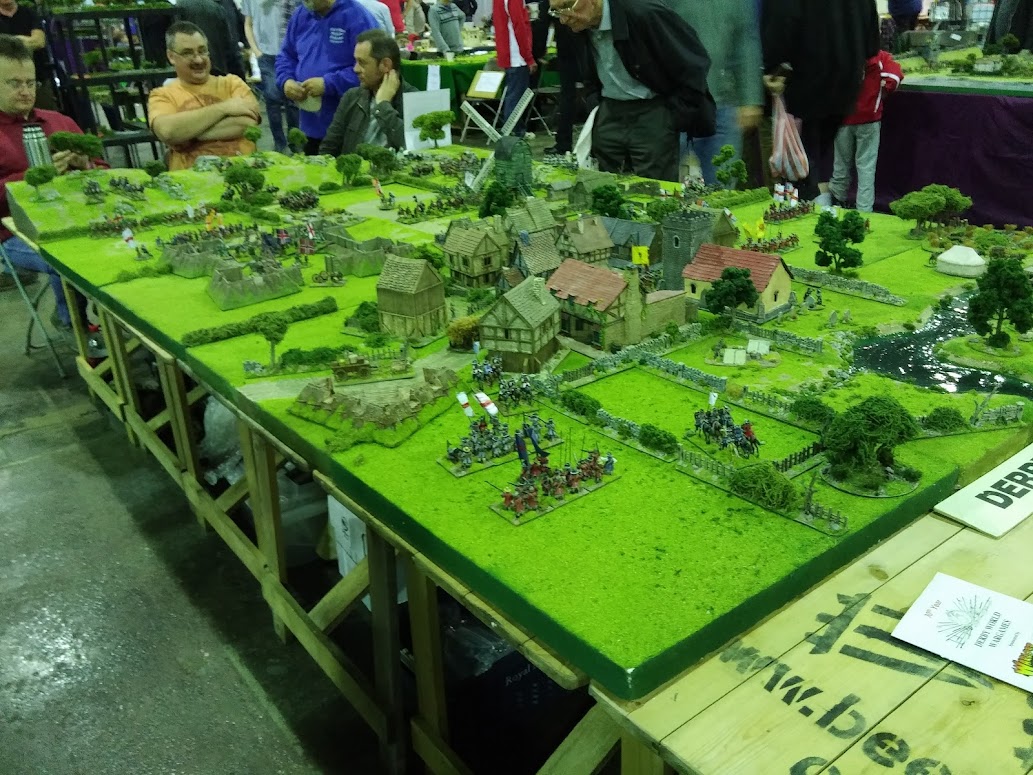 A close up of King Williams troops advancing:- And another close-up of their opposition:- 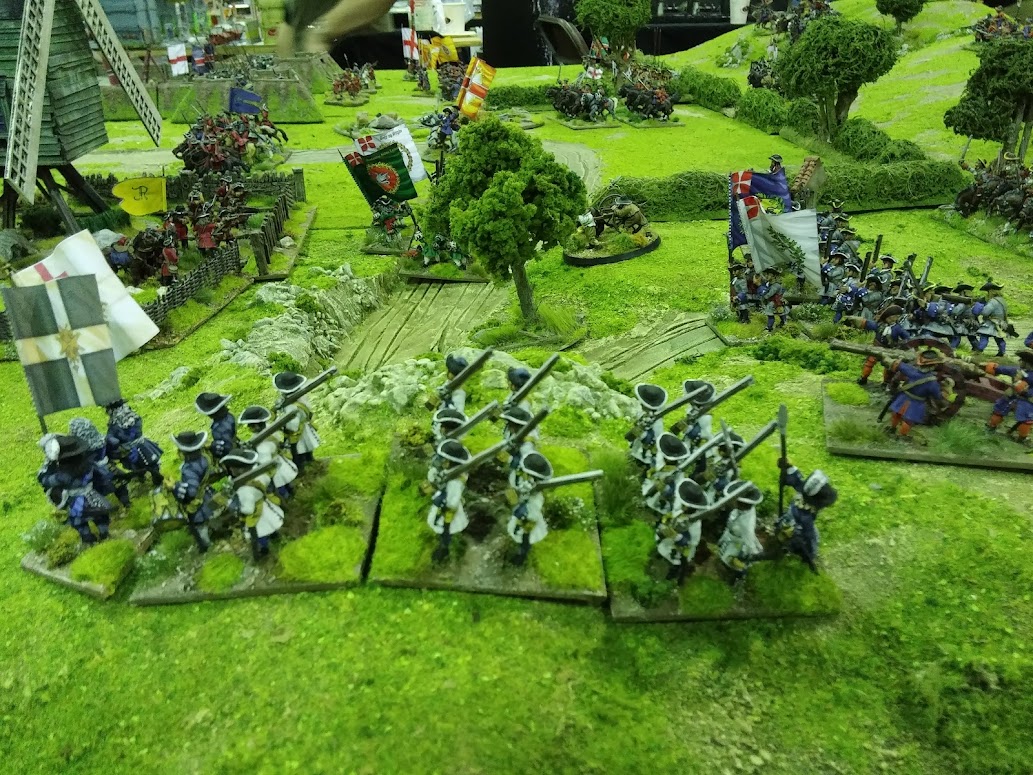 I'm not sure which game it was but we admired a large Dark Ages game with some beautiful figures and a large Late Roman fortification.  Most of the photos I took of this were blurred but this is a close-up of a group of barbarians (almost) at the gate. 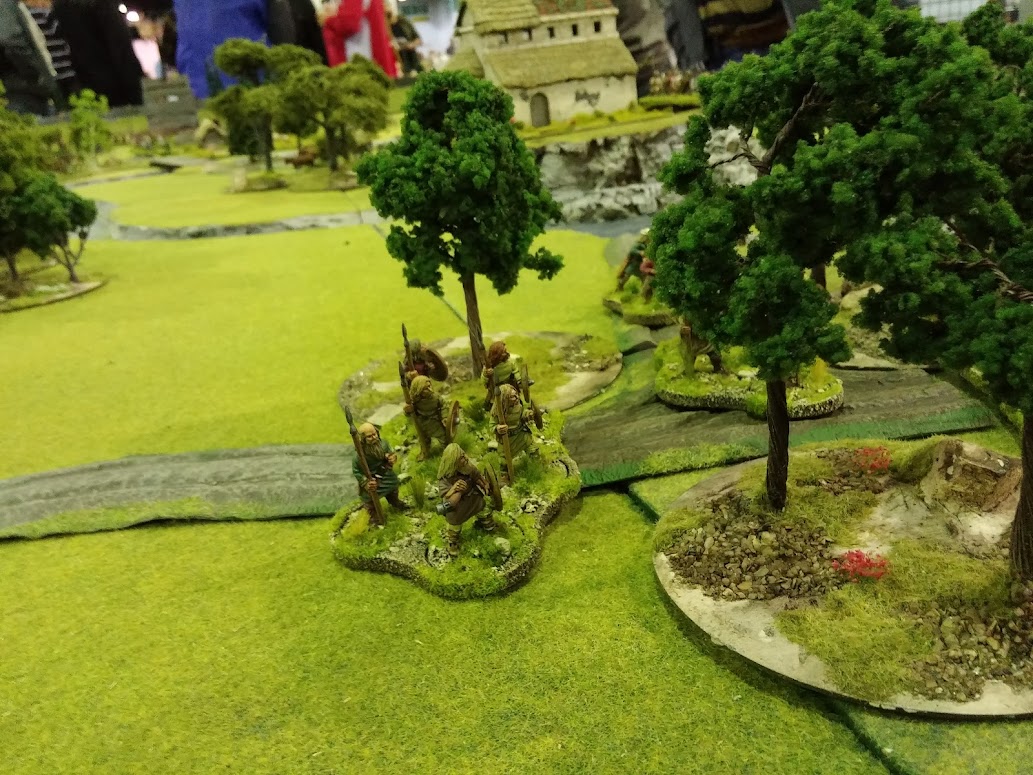 And now one of the most elaborate demonstrations of the show.  The Boondocks Sayntes: 'Fousands of 'em ...... sounds like a train! Zulu war game which reminded me of the Battle of Isandlwana. 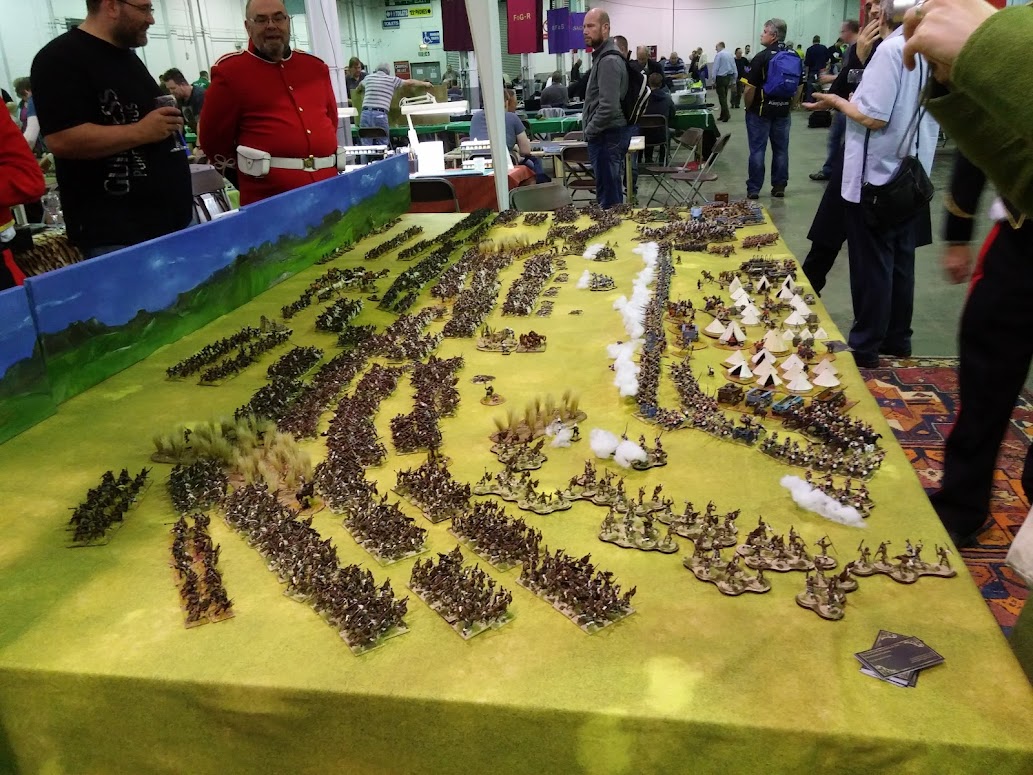 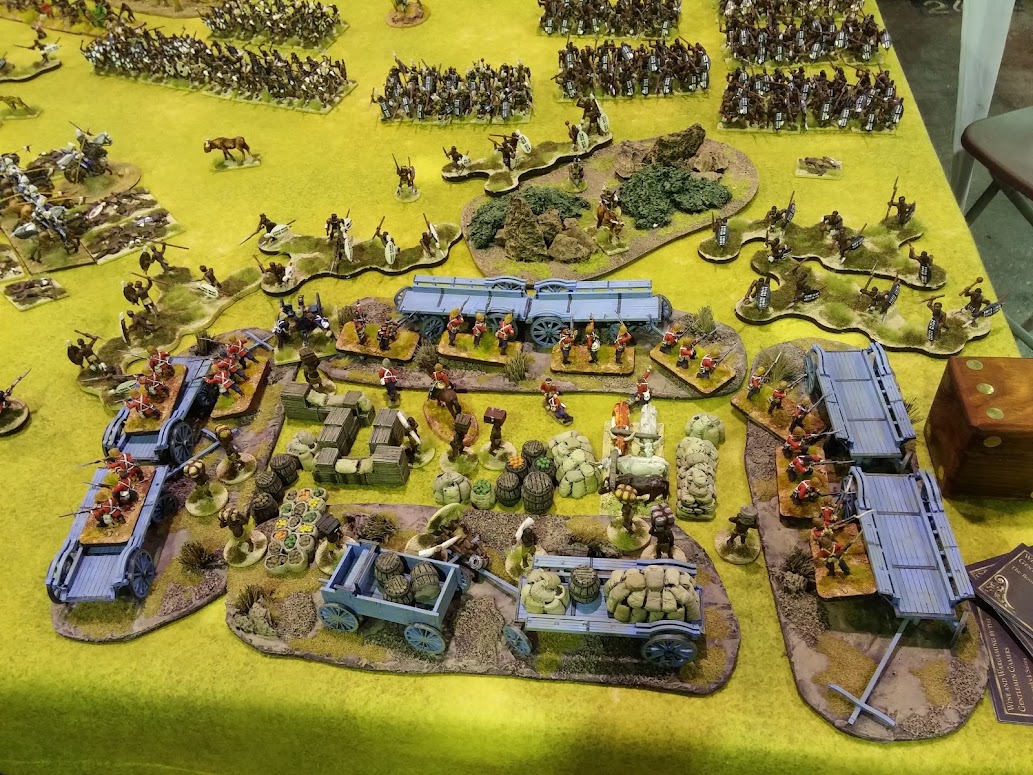 Then on to the Border Reivers: The Wild Bunch.  A great looking game recreating the climax of the 70's Sam Peckinpah western. 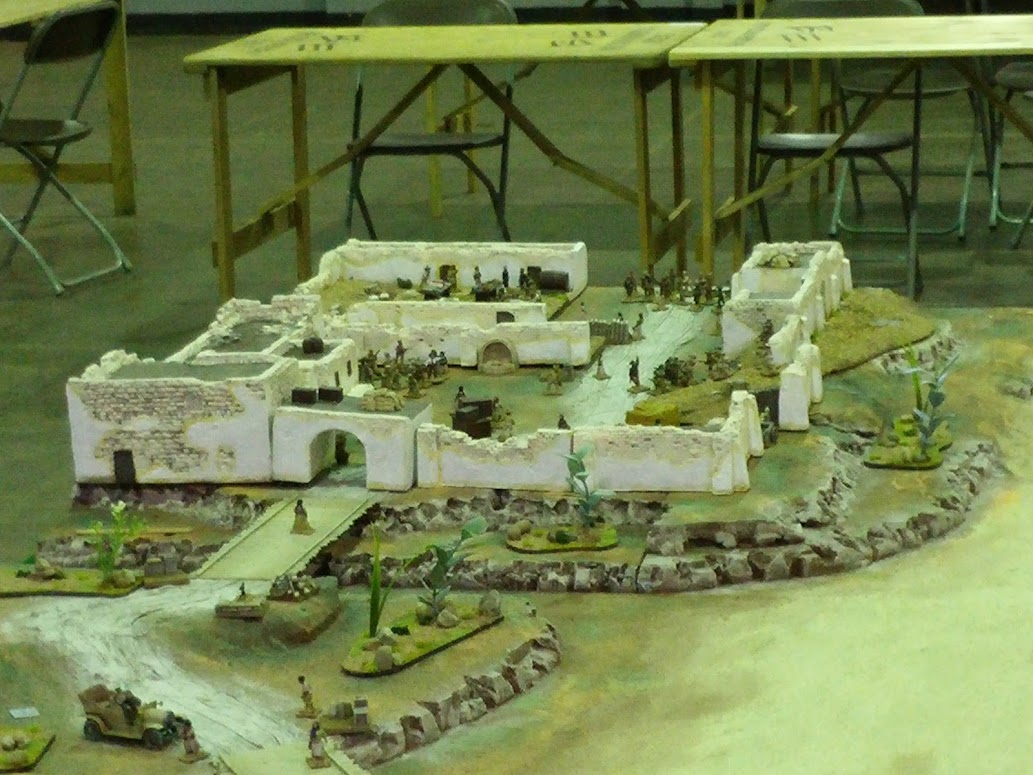 Finally Jack and I spent some time watching a couple of games in the DBMM competition.  In the game closest to the camera in photo below a Later Byzantine army took on a Dark Ages barbarian army of Warbands and Fast Knights.  The Byzantine army moved swiftly around to the rear of the barbarian army, avoiding the warband horde.  The game ended with the warband having hardly fought anyone and all the action taking place on the hill on the barbarians baseline. 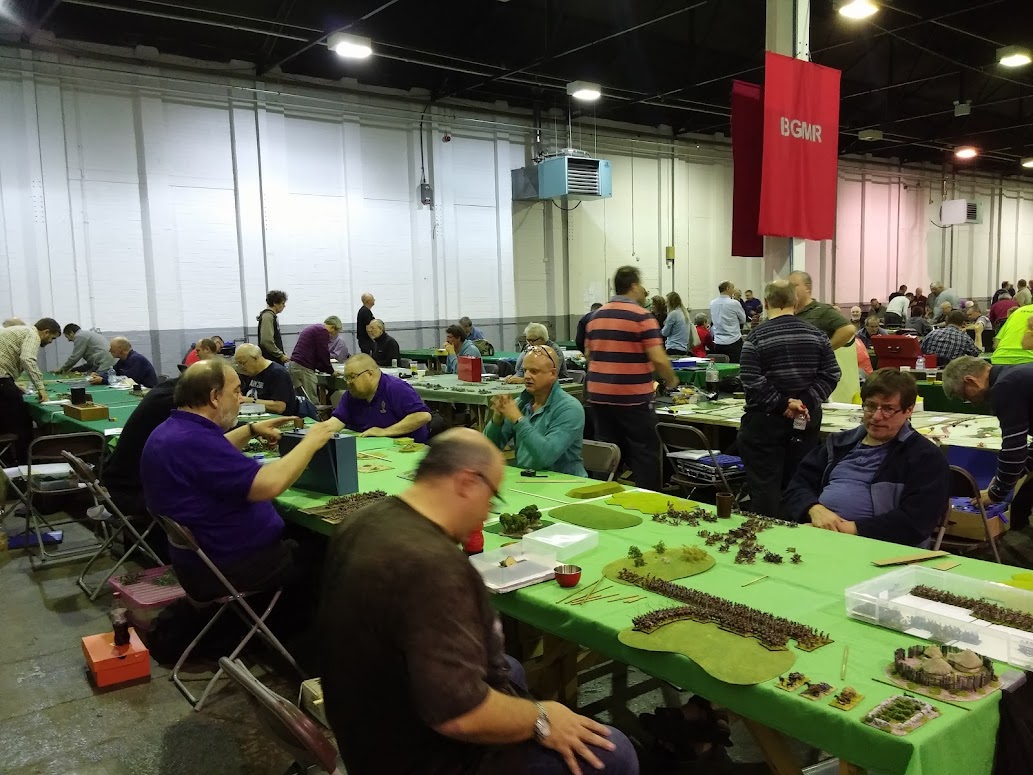 The second game we watched was a Chinese army versus a Dark Ages barbarian mounted army of Fast Knights and Superior Light Horse.  The barbarians only deployed their CinC's small command of Knights on a hill on their baseline, which is obscured by the player sat on the right in the photo below.  Their two large Light Horse commands were on flank marches.  Before they could arrive the Chinese surged across the board and despite suffering casualties they destroyed the CinC's command.  The two flank marches arrived and when we left had destroyed the Artillery and a couple of other stands left to protect the Chinese baggage, then looted the baggage.  However the victorious Chinese commands had managed to turn around and were slowly making their way back to engage the looters. 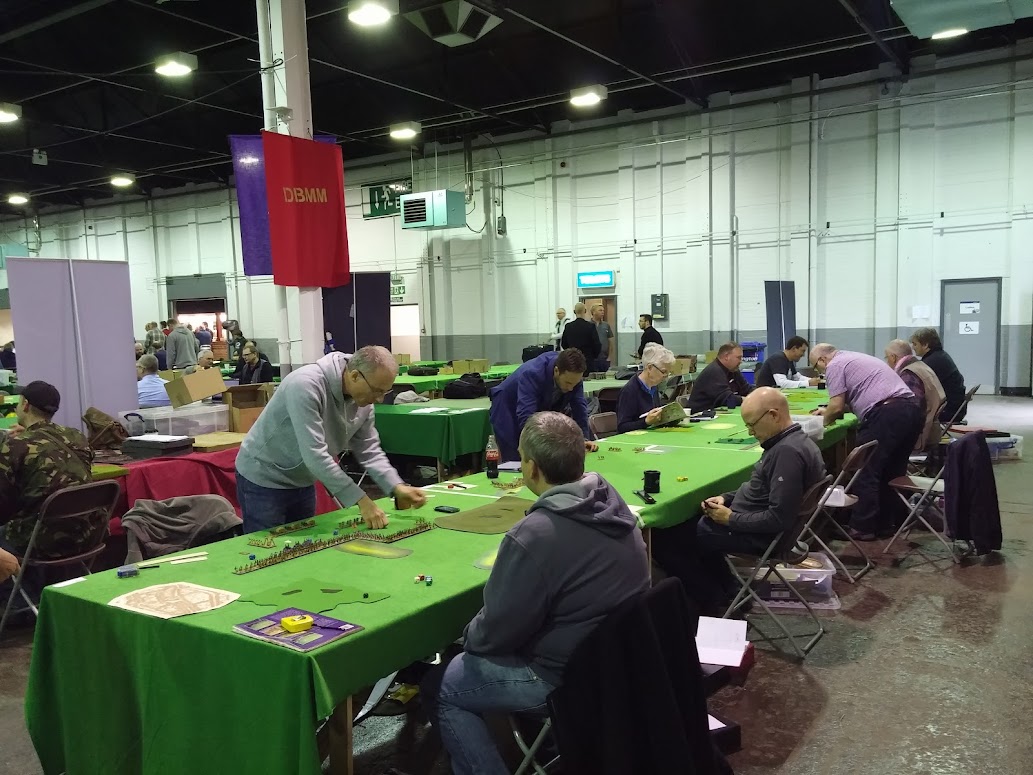 One last photo of part of the hall late in the day just before we left.  It was a great first day for the show with a lot of people attending.  It gave me hope for the hobby after Partizan in September that I felt wasn't as well attended as most of the others I've been to over the past twenty years. 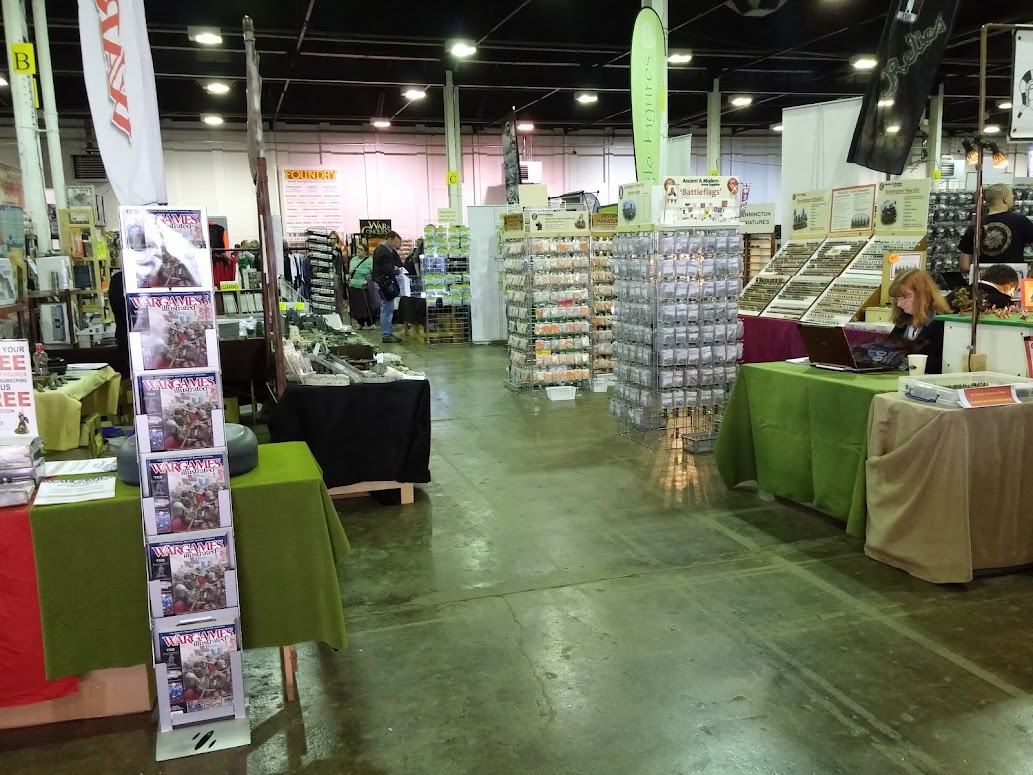