In a departure from Power Legion statistics this post is about rebasing Heroclix to use in any Superhero game.

The manufacturer of heroclix has changed the bases several times over the years.  The very first Heroclix set Infinity Challenge had thin bases with the feet of the figures glued directly to the bases.


When the first DC set Hypertime was released the figures were cast with plastic discs beneath their feet which enabled a firmer bond between the figure and its base.  Wizkids used this arrangement on and off for many of their set releases.


The next change came with the moulding of a larger curved base beneath the feet of the models which was then glued onto the clix base itself.  The figures base had three small holes underneath that lined up with three studs on the clix base so all figures could be glued into exactly the same point on the base.

This setup was still used in the first sets that had the thicker clix bases.  This changed into the bases used today which have a thicker moulding on the base that the figures base fits over.

The bases showing the four different ways that figures are attached can be seen below:- 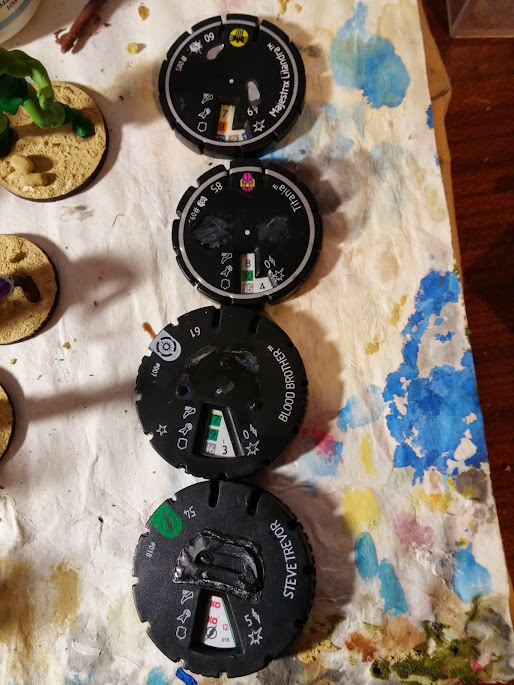 The best way to remove heroclix from any of these bases is to place the figures base on a firm surface.  Then place the blade of a craft knife on the join between the figure and the base.  Apply pressure and rock the knife back and forth. 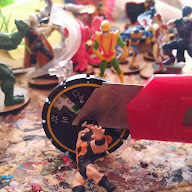 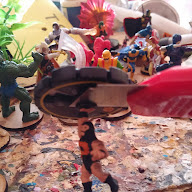 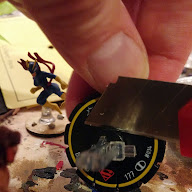 Once one leg is free, repeat on the other foot.  Be careful to keep your fingers away from the blade as the bond between the clix figure and its base tends to part quickly once some pressure has been exerted.  On the earlier bases this technique should be sufficient to release almost every figure.  The only figures I've had real difficulty with have been those with a greater than normal surface area between figure and base e.g Sinister's Hydroman and some of the figures cast with scenery beneath them.  These eventually came off but with slightly more effort.

Most of the latest figures can also be removed easily with this technique but some are glued more firmly than others and the latest Avengers Assemble set figures seem very firmly attached.  If you find a figure is particularly firmly attached try rotating the base and applying the blade all around to break the glue seal.  You may be able to create a space so that you can lever the figure off the base.  Otherwise you will need to cut into the moulding on the base itself.  Eventually this should free the figure.  You can see from the Steve Trevor base in the first photograph I had some difficulty with him.

The next step is to glue the figure to its new base. You can buy resin bases representing roads and pavements from Black Cat Bases http://blackcatbases.com.  These can take some work to prepare before use.  I use two pence pieces for figures with a high centre of gravity e.g. figures on the old style heroclix flying bases, 2p size 2mm thick MDF or 30mm diameter 2mm thick MDF bases from Warbases http://war-bases.co.uk.  For giant figures I use 50mm 2mm MDF bases.

I'll go through how I finish off the bases in a later post.