This is an after action report on the first game of Song of Drums and Tomahawks a couple of us played last night.

I took the British and my friend Mark took the French.  My force was comprised of:-

The location of the battle was at a remote Inn in the far north of the British colonies.  The aim of both sides was to capture the Inn, the French to loot and burn the British to occupy.  The first picture shows my forces deployed on the board edge.  Mark's troops were in the wood on the far side of the Inn. 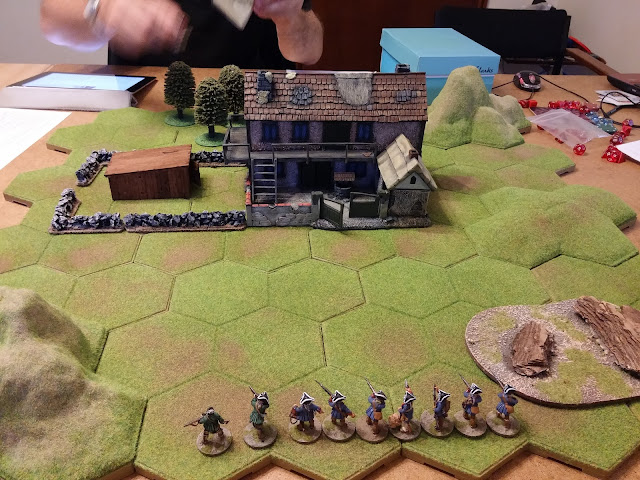 This is a close-up on my Provincial Troops. 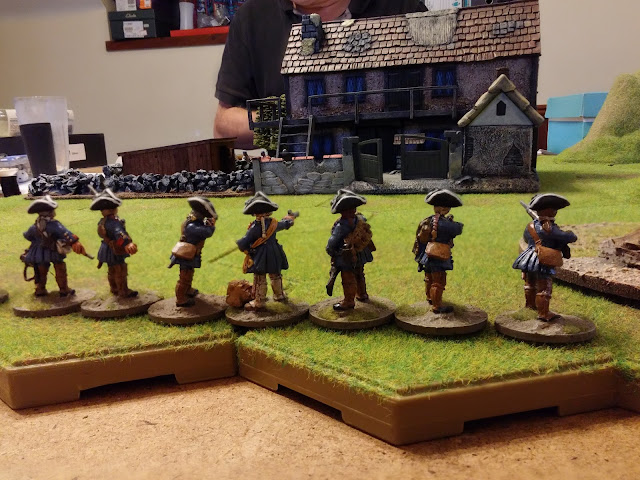 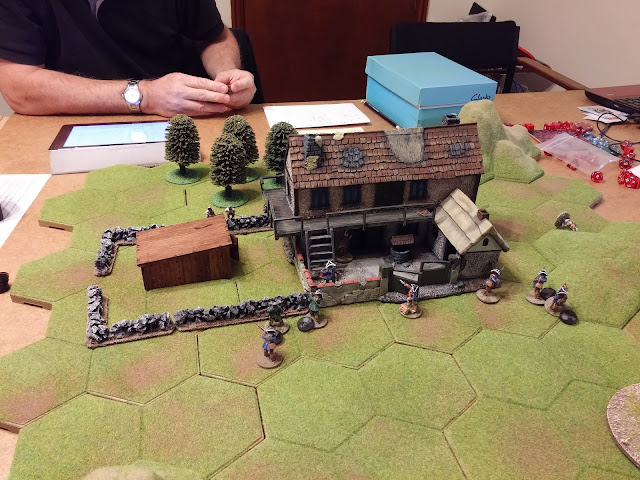 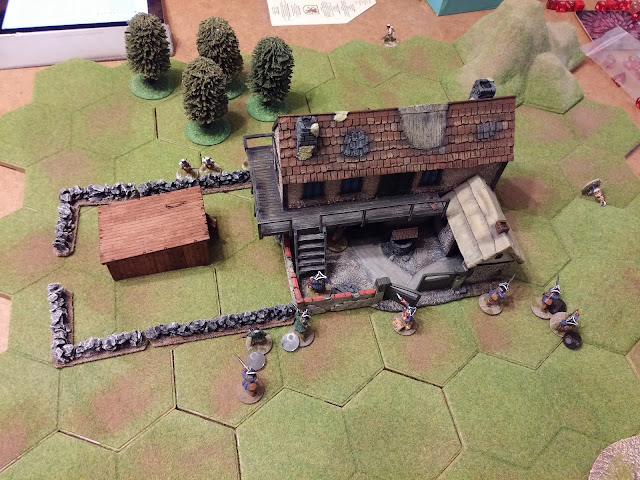 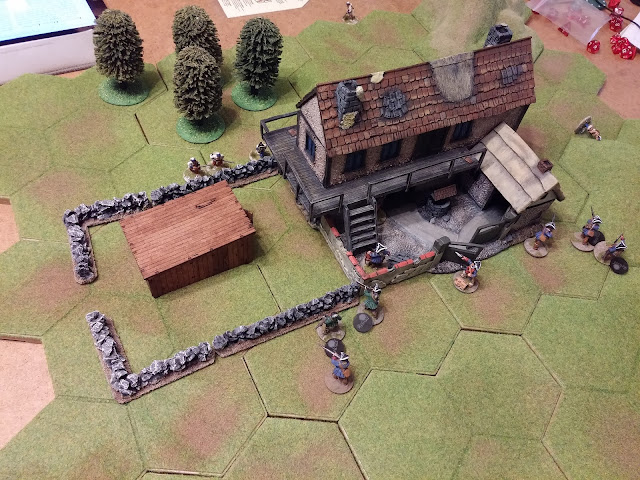 Things didn't go well for the British with return fire from the Marines wounding the Ranger who had brought down their friend.  The Courier de Bois recovered before he could be finished off and the French occupied the Inn first knocking down the British Sergeant in the yard.  The British Grenadier still couldn't get inside. 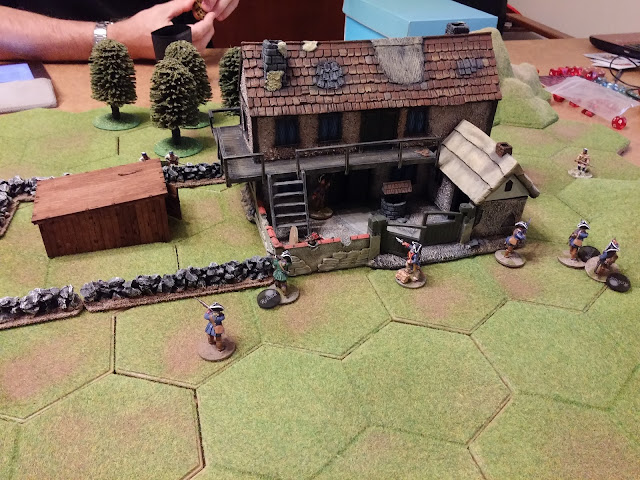 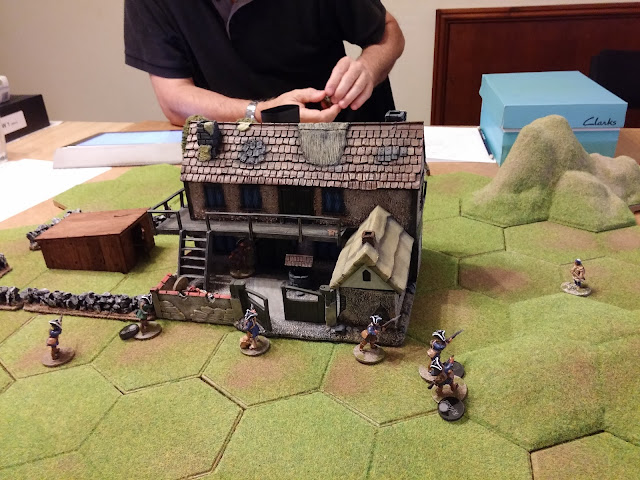 Things went from bad to worse with the French civilian wounding a soldier with his pistol from an Inn window.  The Sergeant failed to get up and the Grenadier still couldn't get through the door. 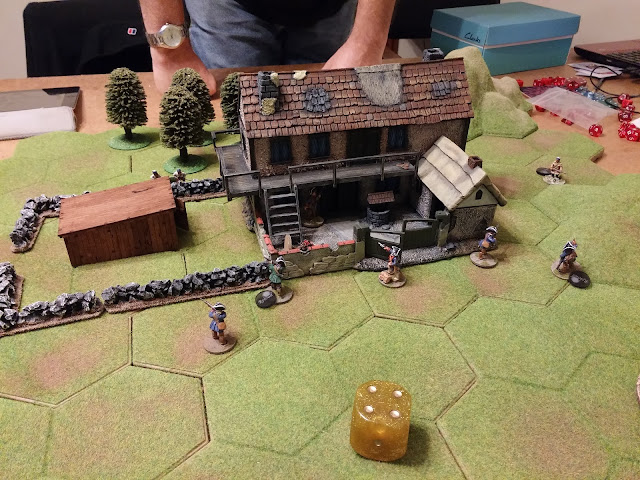 The British Grenadier burst through the door and attacked the French Sergeant.  The Sergeant easily defeated the Grenadier leaving him wounded on the floor.  The British Sergeant regained his feet and followed the Grenadier through the door but couldn't come to grips with the burly Frenchman.  The French civilian knocked down another British Soldier.  Things were going very badly for the Brits.  To make matters worse the vulnerable Courier de Bois had made it back into the lee of the Inn. 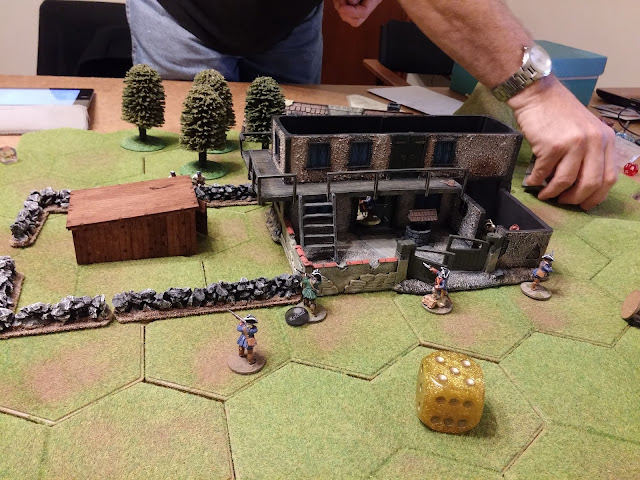 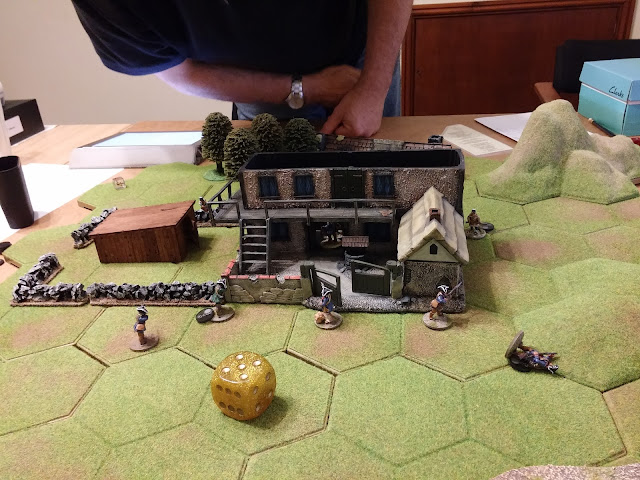 The Brits through a combination of bad luck and poor choices did very little for several turns.  Their Sergeant was driven back by a series of attacks by his French opponent.  More Frenchmen entered the Inn.  It looked like the end for the plucky Brits. 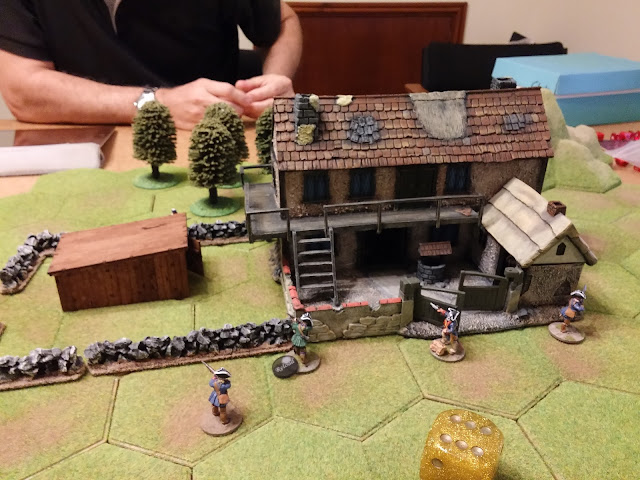 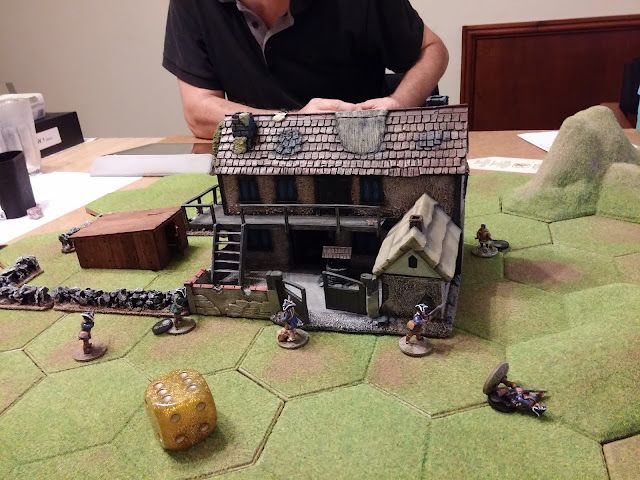 Another turn of British inactivity with their Sergeant driven back again by his opposite number.  The remaining British Ranger was knocked down by musketry from the French Marines. 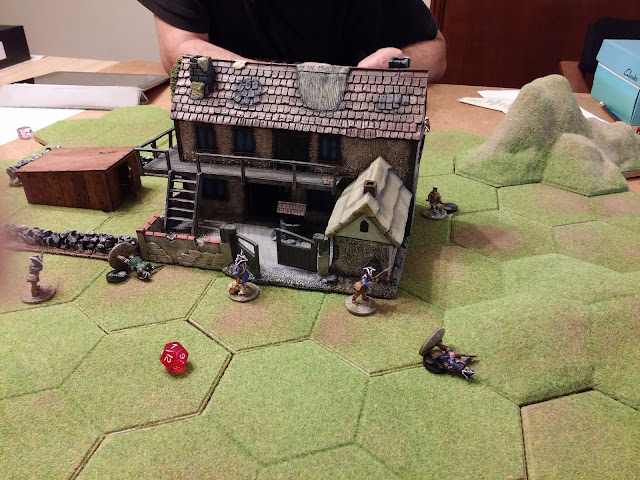 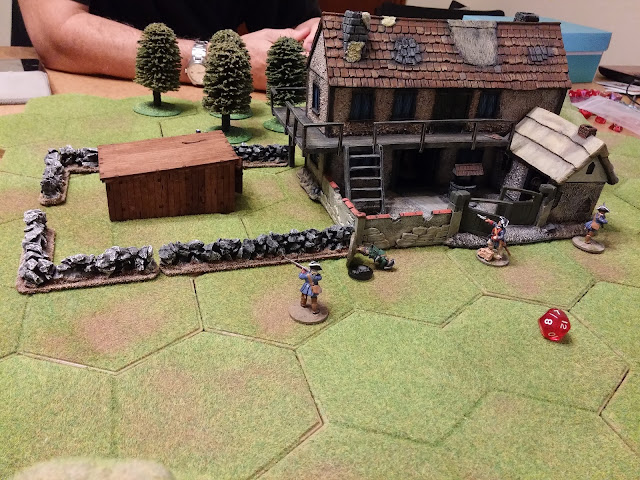 In following up his success the French Sergeant had moved in front of the open door.  The British Officer taking careful aim with his pistol fired and brought the French Sergeant down.  Two French casualties now to three British but the morale tests made by the French meant the two remaining Marines disappeared back into the woods and the Civilian abandoned his place to fall back.  The Courier de Bois was made of sterner stuff and didn't move. 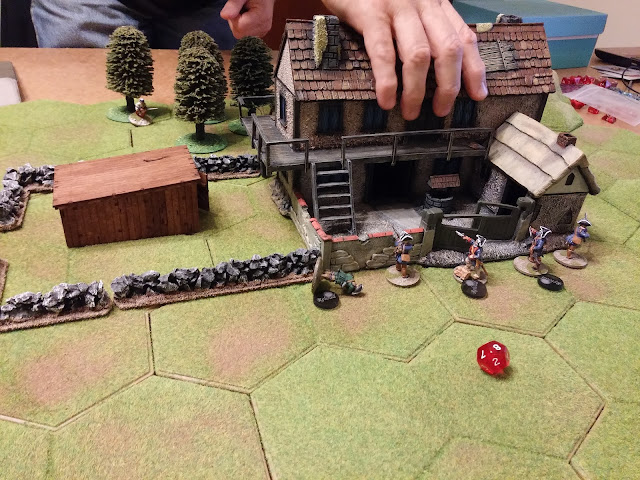 Most of the British gathered outside the Inn gate whilst the Sergeant faced the French Officer and Civilian inside the Inn. 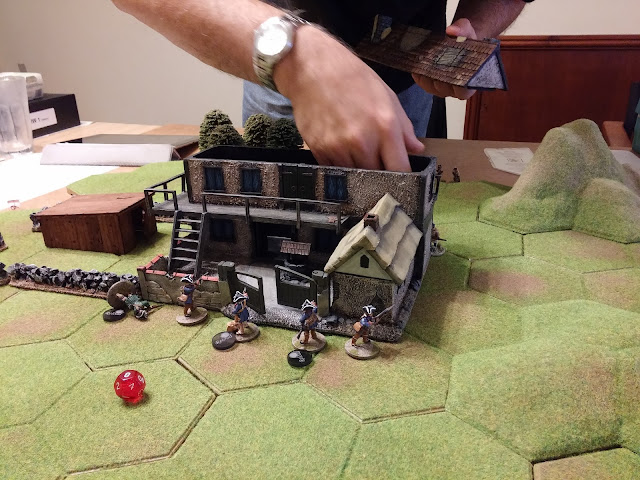 All the focus was now on the interior of the Inn.  The British Officer sent in a Soldier to support the Sergeant.  It looked to be too late when the Sergeant was knocked down by a shot from the French Civilian. 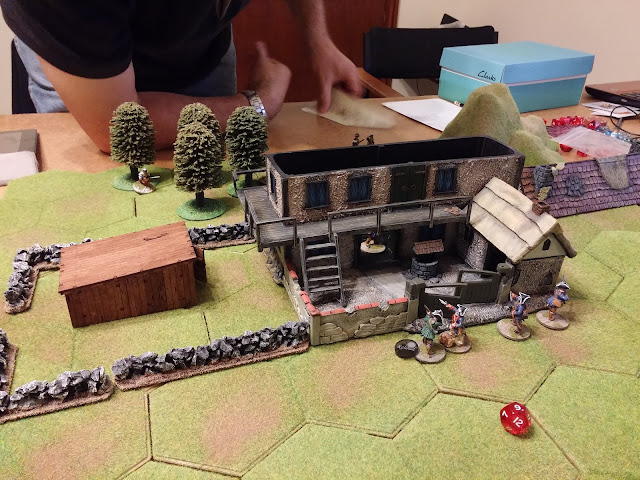 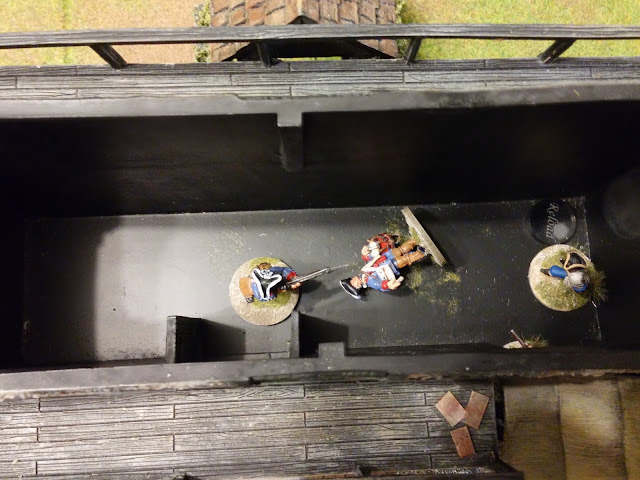 The British started to move up to support the Sergeant.  He made it back to his feet and into contact with the French Leader only to be knocked down again. 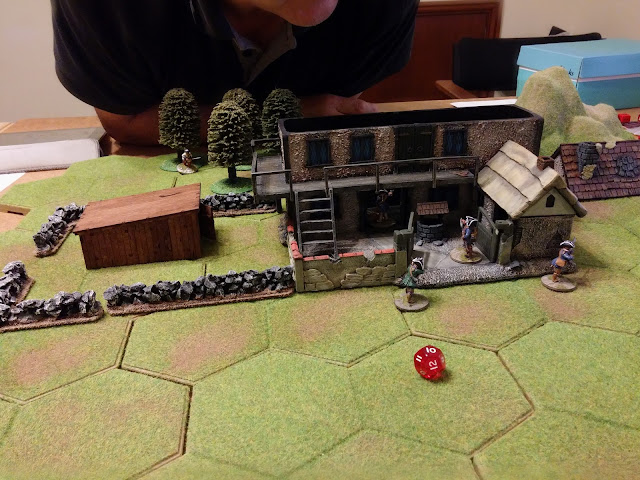 The climax of the battle came in the interior of the Inn with the British Sergeant repeatedly knocked down yet surviving attack after attack.  Finally with support from the Soldier he killed the French Officer and most of the Frenchmen fled leaving the field to the British.

The final view inside the Inn. 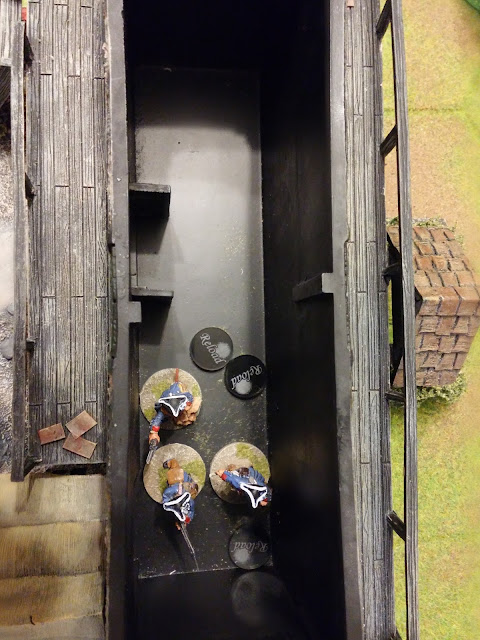 It was a close game with my poor play and poor luck almost costing me the game after 4-5 turns.  It was the lucky shot that killed the French Sergeant that turned the game in my favour.  I probably should still have lost as my Sergeant had to survive several attacks whilst knocked down.  When the tables were turned his luck held and he killed his opponent.

The rules work well but there are a few differences to other Ganesha rules most notably the Group Action rules.  These only allow certain types of troops to move as a group and then only in groups of the same type of troop e.g. Regulars, Rangers or Indians.  Each of these groups has their own type of group move and Leaders usually get to move along with their troops.  The weapon rules are similar to other Ganesha rules but Muskets are pretty powerful though not super-weapons.  Overall a good set of rules.  Next time we'll try some other troops with perhaps some Indians.