This post is a record of my second game of Ganesha Games new solitaire dungeon delving game Four against Darkness (4AD).  The game is inspired by the early versions of dungeons and dragons. For example they include three races as classes.  Elves are fighter/magic users, Halflings are a class of their own bringing their small size, hardiness and luck and Dwarves are a type of Fighter.

Once you select four characters from the classes available, Warriors, Clerics, Rogues, Wizards, Barbarians, Elves, Dwarves and Halflings, you randomly generate a dungeon using the tables provided.  First by rolling for the shape and size of the next room or corridor from a pool of thirty six.  Next you roll for the contents of the room, which can be empty allowing characters to search for secret doors etc. or contain various monsters or special features or events.  The aim is to find and defeat the final boss deep within the dungeon.

In combat against monsters you can choose to attack first or forfeit the first strike to test the creatures reaction to the characters.  The monsters reactions can include asking for a bribe to allow the characters to pass, in rare cases giving the characters a quest, fleeing from more numerous characters, attacking the characters first and attacking then fighting to the death.  It's worth checking before attacking as each type of monster has its own reaction table.  Monsters don't roll dice, the player characters roll dice to attack and defend.  In attacking a character rolls a d6 modified by its class and equipment.  For example Warriors, Barbarians, Dwarves and Elves add their level to the result.  If fighting weaker monsters the result is divided by the level of the monster and the result (rounded down is the number of creatures killed.  Against tougher monsters known as Bosses as long as the result is equal or higher than the monsters level it loses one life.  Once the monsters are below half their original numbers or for bosses half their hits they take morale tests and sometimes run away.  Monsters attacks on player characters are divided between the party who roll saves against each attack, modified by the armour the  character is wearing and in some cases its class e.g. Rogues add their level to the result and Dwarves and Halflings get bonuses against some large monsters.  Once defeated most monsters leave treasure behind which is also generated from a random table.  Some monsters give a modifier to the Treasure table so tough monsters have a greater chance of having a magic item, weaker monsters and Orcs have no chance of having a magic item.

The game also features Traps, Wandering Monsters, Clues and rules for levelling up.  In short it has all the flavour and style of the old style dungeon bashes but plays solo often in under an hour.  One supplement the Caves of the Kobold Slave-Masters has already been released with many more promised.  The rules can easily be expanded by the player, generating new tables or even reworked into a completely different setting.  For example I've been working on a Sci Fi version with Soldiers, Medics, Technicians, Androids and Heavy Weapon Soldiers as classes.  The rules are available from:- 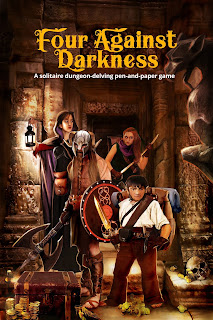 The party I took into my second game were a 2nd Level Dwarf (Thorgrim) and Wizard (Purditta) and a 1st Level Rogue (Monsieur Rouge) and Cleric (Drusilla).  They had fought their way through a dungeon before but as it was my first game it took much longer than it should and in the end I had them fight their way out of the dungeon fighting the final boss (a Mummy) in the entrance of the dungeon.  The Wizard and Rogue almost died, dropping to one hit each

In this second game I was much clearer on the rules and the game went faster and smoother.  It took sixteen rooms to find the final boss, a Medusa.  The rooms and their contents (Monsters and Treasure) are shown below with the map below the list.

On the way back the party were attacked by 2 Hobgoblins who after wounding Drusilla, were quickly dispatched.  They were then ambushed by 4 Goblins who also wounded Drusilla before Thorgrim slaughtered them all.  Finally in the entrance hall just as they thought they were out of the dungeon they were assaulted by another Mummy who wounded Thorgrim and Drusilla in the first round but was then hit by every party member, even Purditta armed only with her sling but with the Altar's blessing managed a lucky strike, which killed it in a single round. Monsieur Rouge leveled up.