I'd first intended this to be a larger fight with six X-men versus six Sentinels.  I soon realised for the board size I'd laid out this was simply not realistic.  The picture below gives a heroes eye view of what that would have looked like. 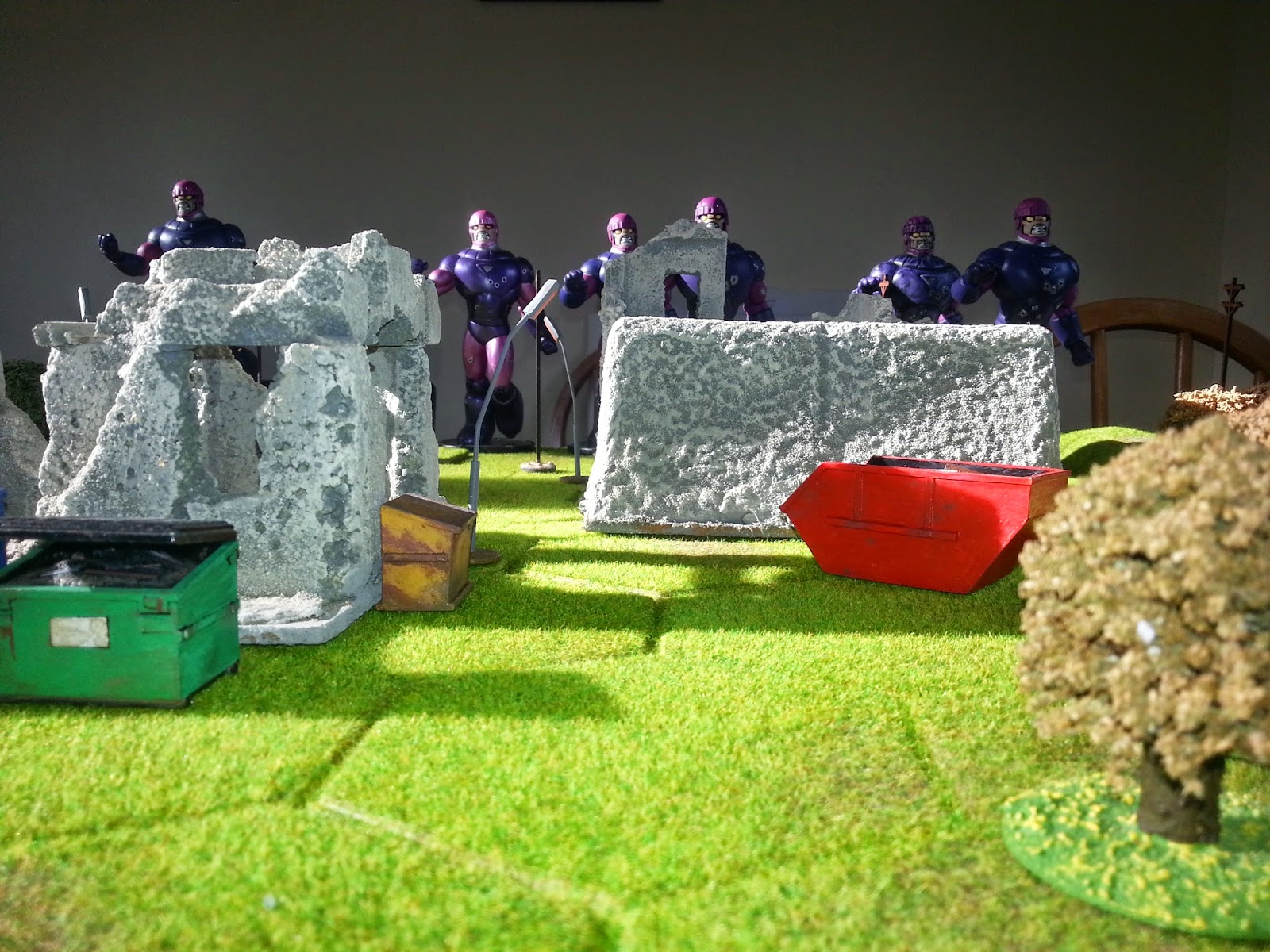 I settled on a slightly less over the top scenario.


Once again this battle isn’t balanced but the objective of the Sentinels is to take down two X-Men and exit the board past them.

The view from the heroes side of the board and the same from the Sentinels side 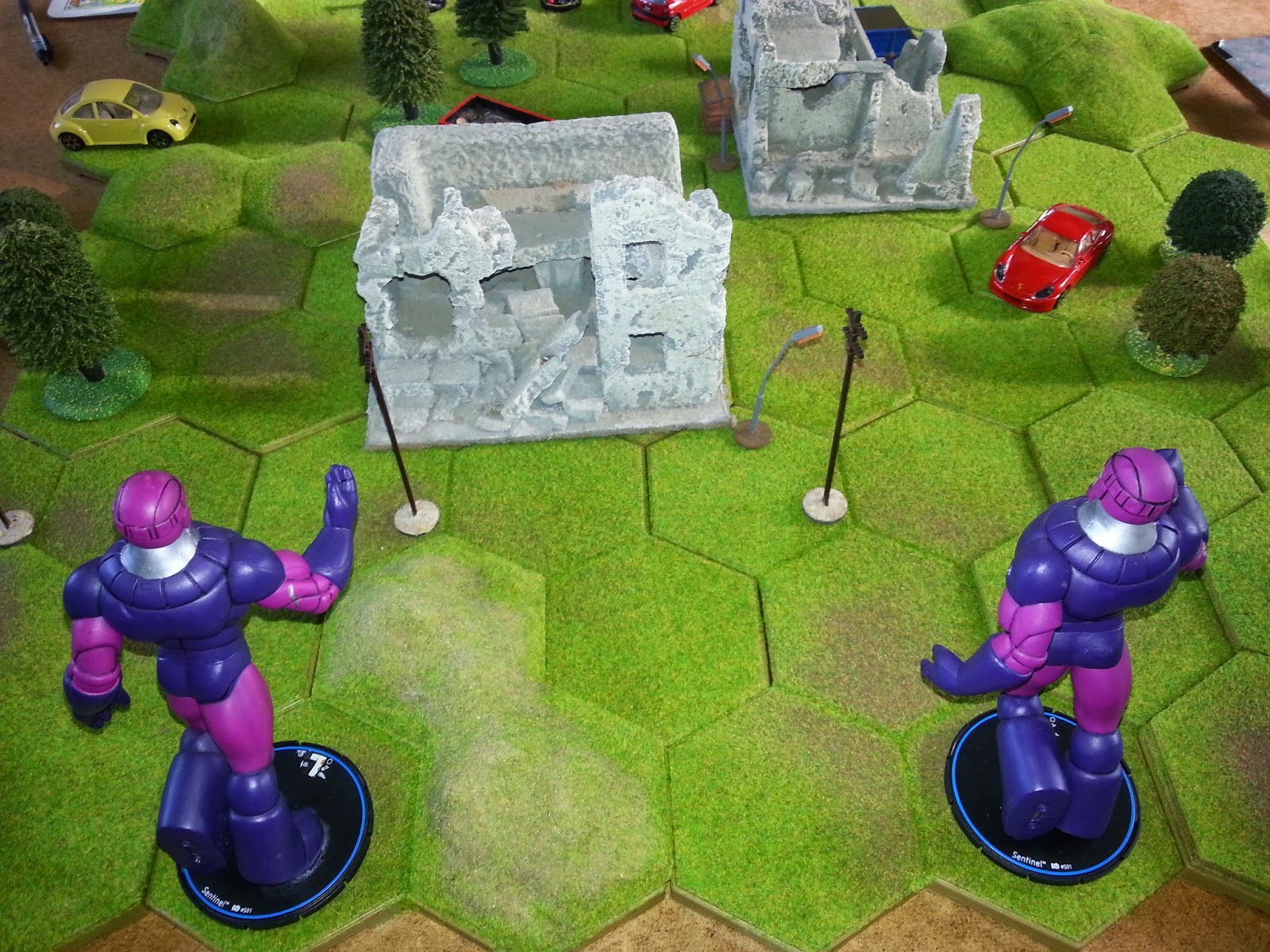 Initiative roll is 3 vs 2 in the Heroes favour.

Wolverine skirts around a tree, waiting for Colossus and banks an action just in case.

Colossus (rolls a 6 for three actions) moves up to him and with practiced ease picks up Wolverine and Fastball specials him at the nearest Sentinel.  Wolverine crashes into the Sentinel but doesn’t do enough damage to hurt it.

Iceman uses his ice slides to move to get a line of sight on a Sentinel whilst remaining shielded from the other.  He then uses his Ice attack.  He hits but doesn’t even slow the robot.

Before the Sentinels can react, Wolverine uses his banked action and slashes at the robot.  He hits easily but the Sentinel barely notices.

Sentinel Alpha lunges at Wolverine with its fist.  It’s close but the robot misses.  It tries again, to grab the Canadian, but just isn’t fast enough.

Sentinel Beta flies towards Iceman. Firing off a blast of energy as it does so.  It hits but can’t get past Bobby’s armour. 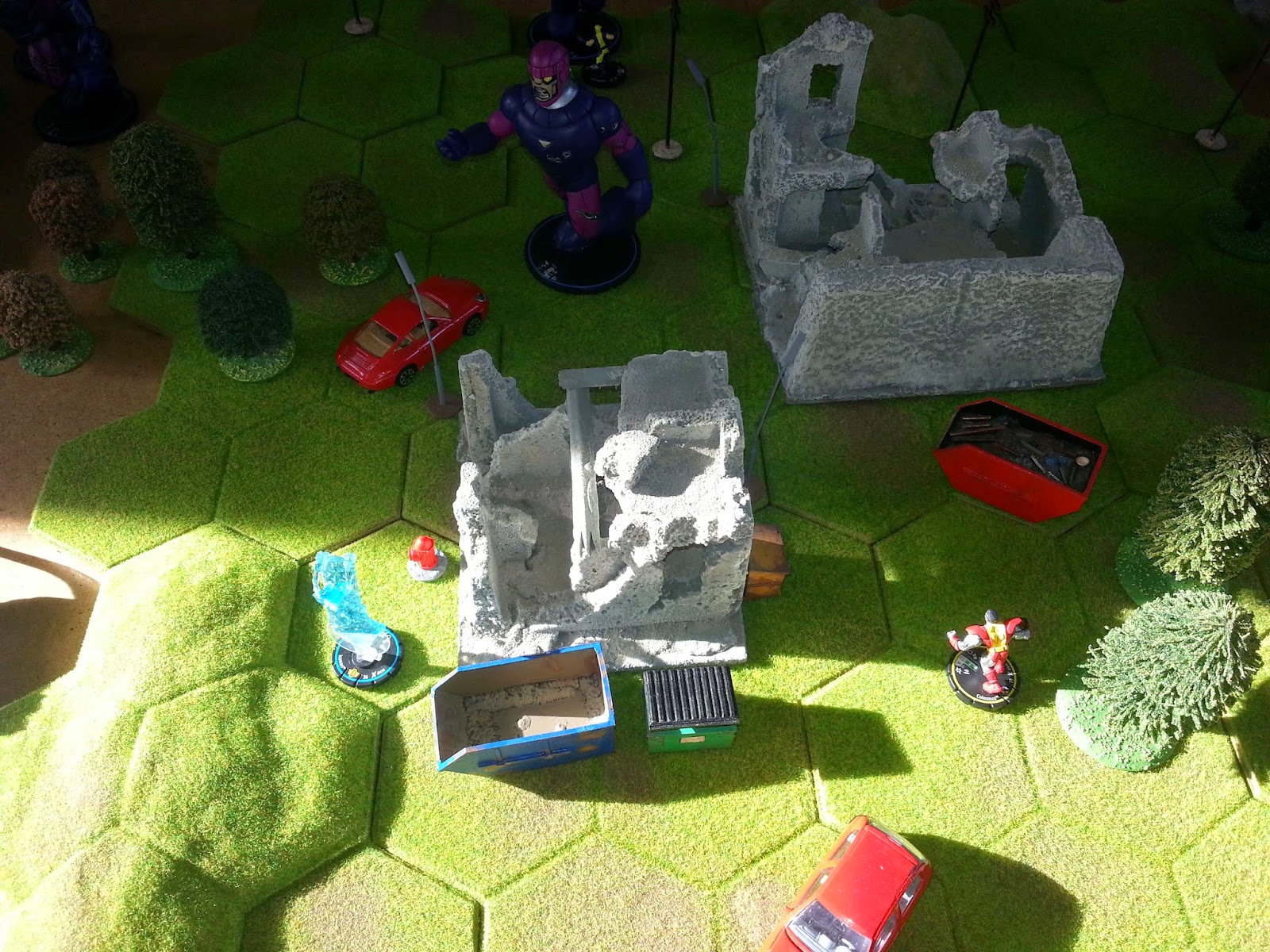 Wolverine leaps at Alpha Sentinel delivering a powerful swipe with his claws.  The robot manages the avoid the attack but Wolverine’s second attack strikes home but does not hit anything vital.

Colossus moves up to the nearby skip, preparing to hurl it at Sentinel Beta.

Iceman remains stationary and tries to freeze Sentinel Beta.  He hits and calls on Fate to help him pushing himself to deliver a strong blast of cold.  The Sentinel doesn’t even notice.

Sentinel Alpha tries to flatten Wolverine with a powerful stamp.  The wily Canadian easily rolls out of the way. 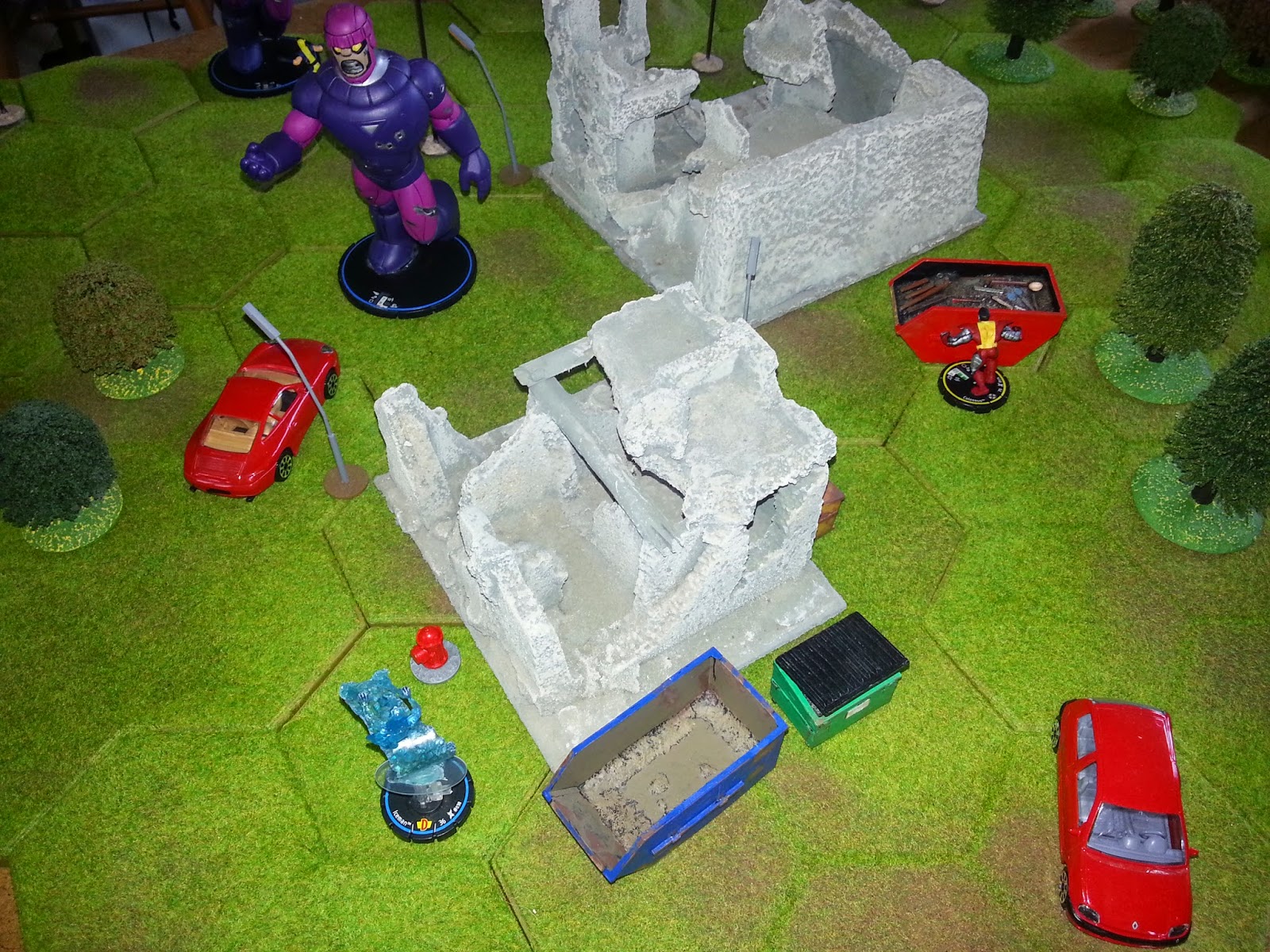 Wolverine attempts another powerful slash at the Sentinel aiming for its head.  The Sentinel manages the bat him away, Wolverine falls, rolls and jumps back to his feet.

Colossus hefts the skip above his head and launches it at Sentinel Beta.  The skip sails past the Sentinel landing behind it.

Iceman slides around the Sentinel delivering a quick bolt of cold.  He hits the Sentinel covering a large part of it in Ice, slowing it significantly.

Sentinel Alpha has been overbalanced by fending off Wolverine and his confused signals means the Sentinels pause giving the heroes a breathing space. 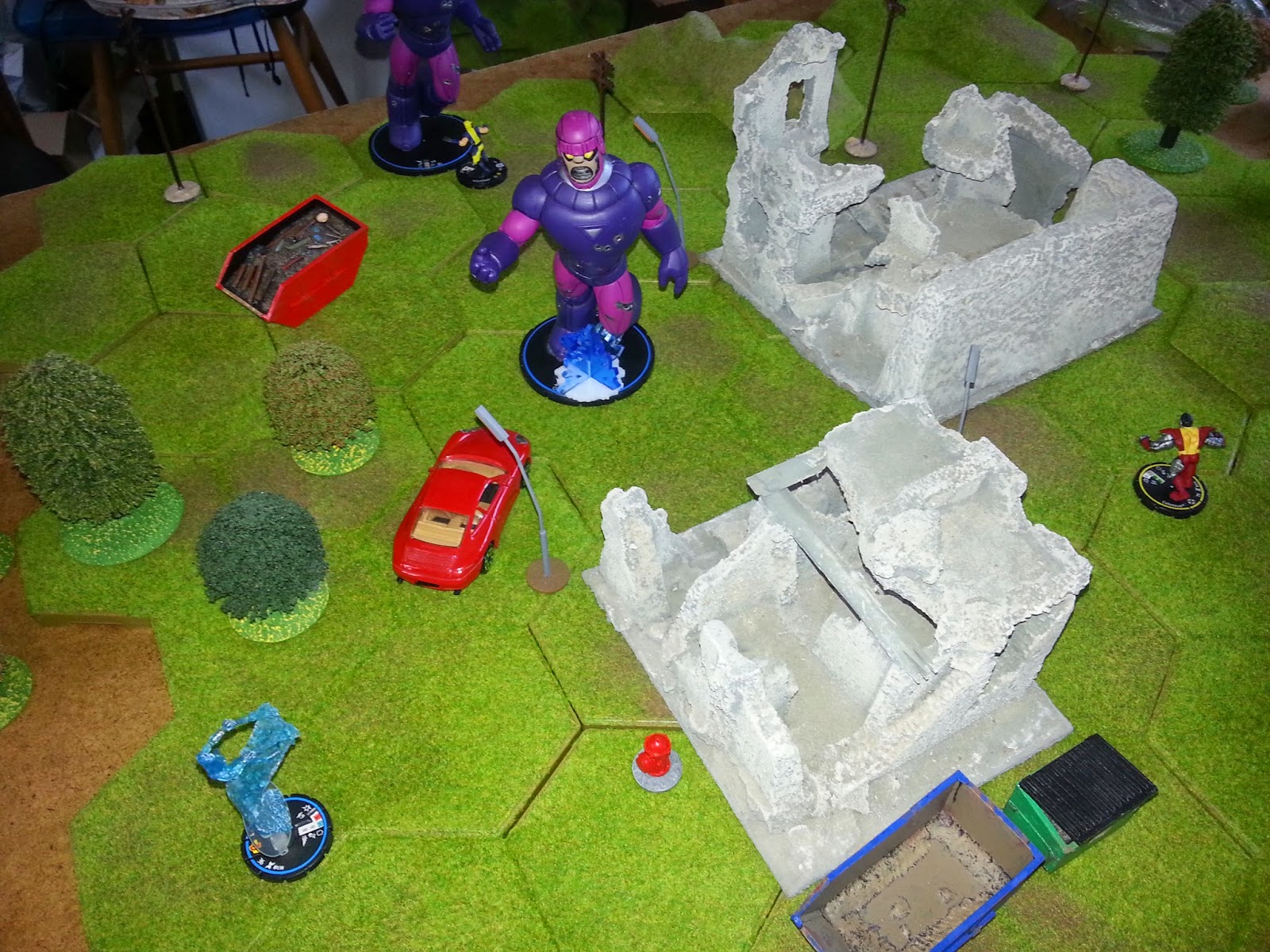 An enraged Wolverine pushes himself and tempting fate to strike a devastating blow to Sentinel Alpha.  His blow glances from the robot’s armour.  He tries again but opens himself for a counter attack by the Sentinel which misses.

Iceman tries to assist Colossus by freezing the Sentinel again.  He strikes twice but the Sentinel’s systems shake off his atacks.

Sentinel Alpha draws back his fist for a powerful blow at Wolverine.  Wolverine deftly steps aside and slashes at the robot’s arm hitting home but only scratching the paintwork. 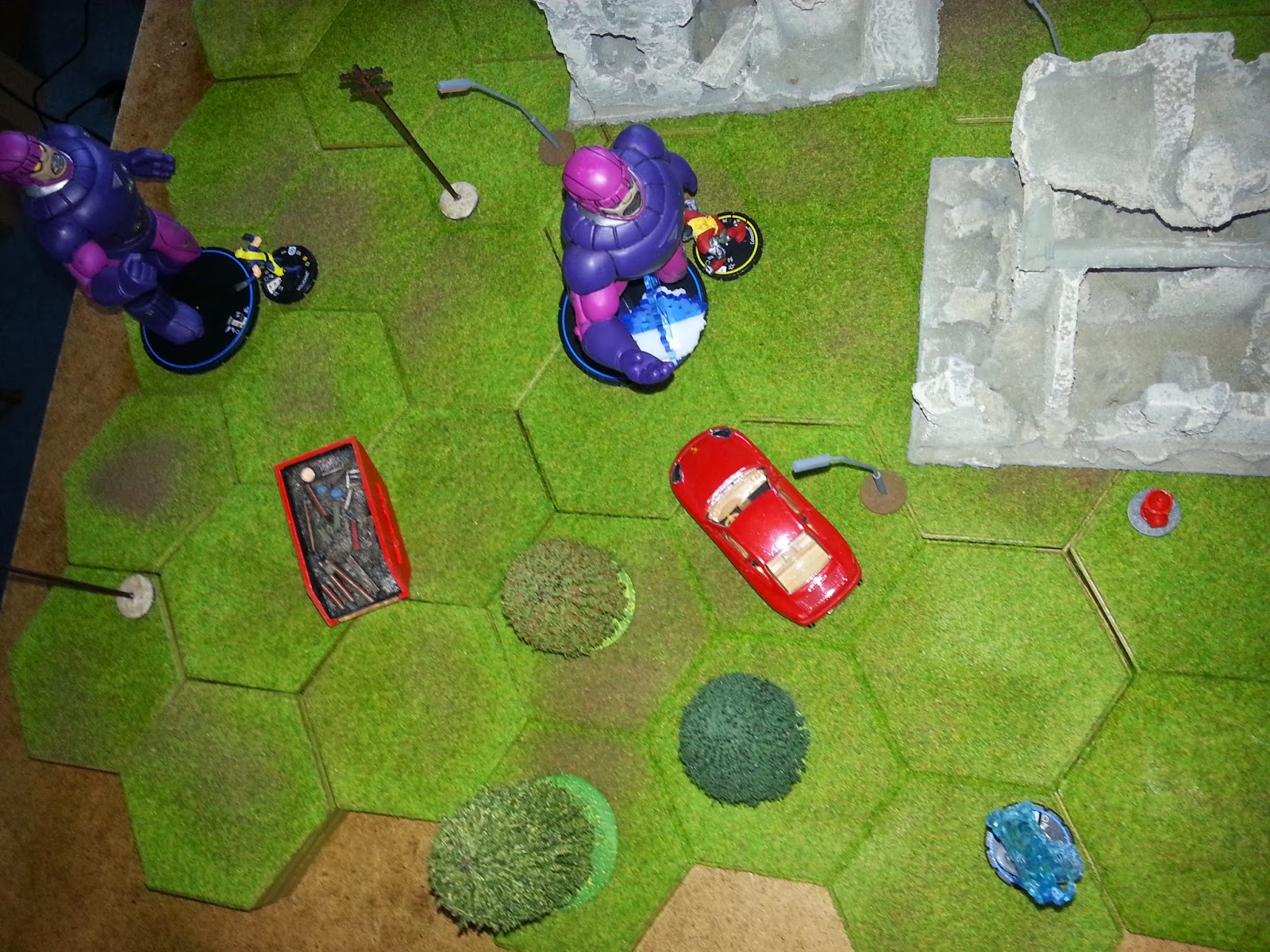 Wolverine darts in under the Sentinel striking upwards, he hits home again but fails to do any damage.

Colossus tries to deliver a powerful blow to the Sentinel he is fighting.  He just hits and his blow staggers the robot.  Fate was not on the robots side.

Iceman looking to capitalise on Sentinel Beta’s discomfort turns too quickly and has to recover, handing the initiative back to the machines.

Sentinel Alpha kicks out at Wolverine catching him as he dodges.  The blow badly hurts Wolverine but he is not knocked out.

Sentinel Beta's circuits manage to reroute and keep it in the fight.  It turns his attention to Colossus reaching out to crush him, but instead Colossus manages to punch the robot, knocking its leg away and bringing it crashing to the ground. 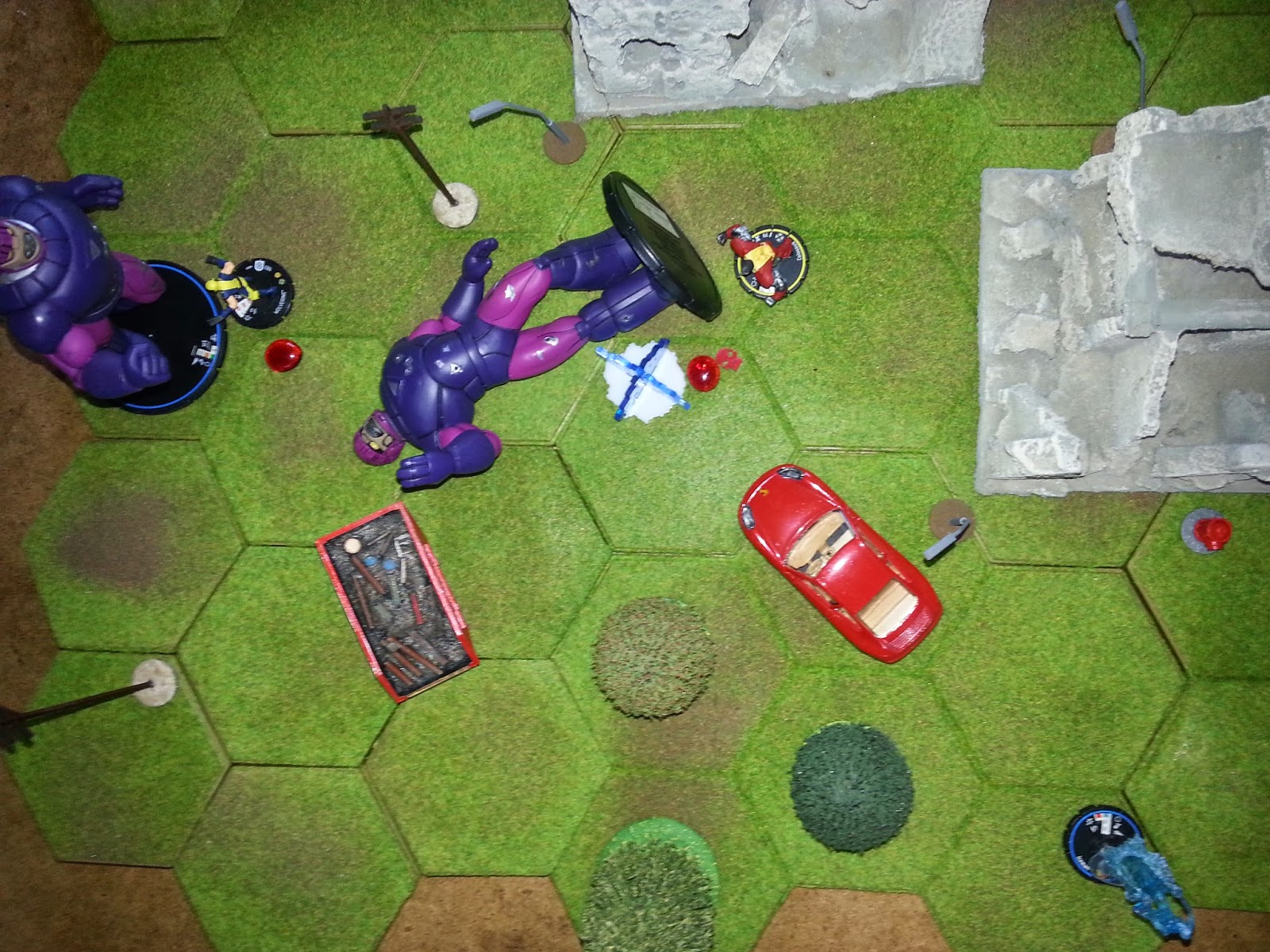 Wolverine still smarting from the Sentinels blow tries to fight back.  The Sentinel is struck once again but the damage is still only cosmetic.

The Sentinel fighting Colossus starts to recover faster than he anticipated only giving him time for a hurried punch. The robot parries one blow but opens itself to a skilful riposte.  The Sentinel armour is dented but not breached.

Iceman slides in behind a tree and fires at the downed Sentinel Beta, only just hitting due to its size.

Even downed and damaged the robot’s armour is more than a match for Bobby’s attack.
Putting extra power into its servos Sentinel Alpha tries to finish off the wounded Canadian but  is struck by the injured hero.  Despite his Adamantium claws Wolverine is unable to hurt the robot.

Sentinel Beta’s central computer desperately reroutes more of its circuits and manages to stay in the fight and is able to right itself.  In the process it tries to kick Colossus, the doughty Russian easily steps aside and punches the robot leaving a deep dent.

Leaping away from Sentinel Alpha, the canny Canadian delivering a powerful surprise attack to Sentinel Beta.  Sentinel Alpha hits him as he goes but does not hurt him.  His claws go deep into the second robot’s back but the unlucky hero fails to do any real damage.

Colossus brings both his fists crashing down on Sentinel Beta again but only does superficial damage.

Iceman trying to avoid harming his allies targets Sentinel Alpha with an icy blast but misses.
Sentinel Alpha finally free from Wolverine returns fire on Iceman.  Iceman is able to swerve out of the way.

Sparks shower from Sentinel Betas torso but he is able to strike at Wolverine.  It fails and Wolverine continues ineffectually slashing into the robot. 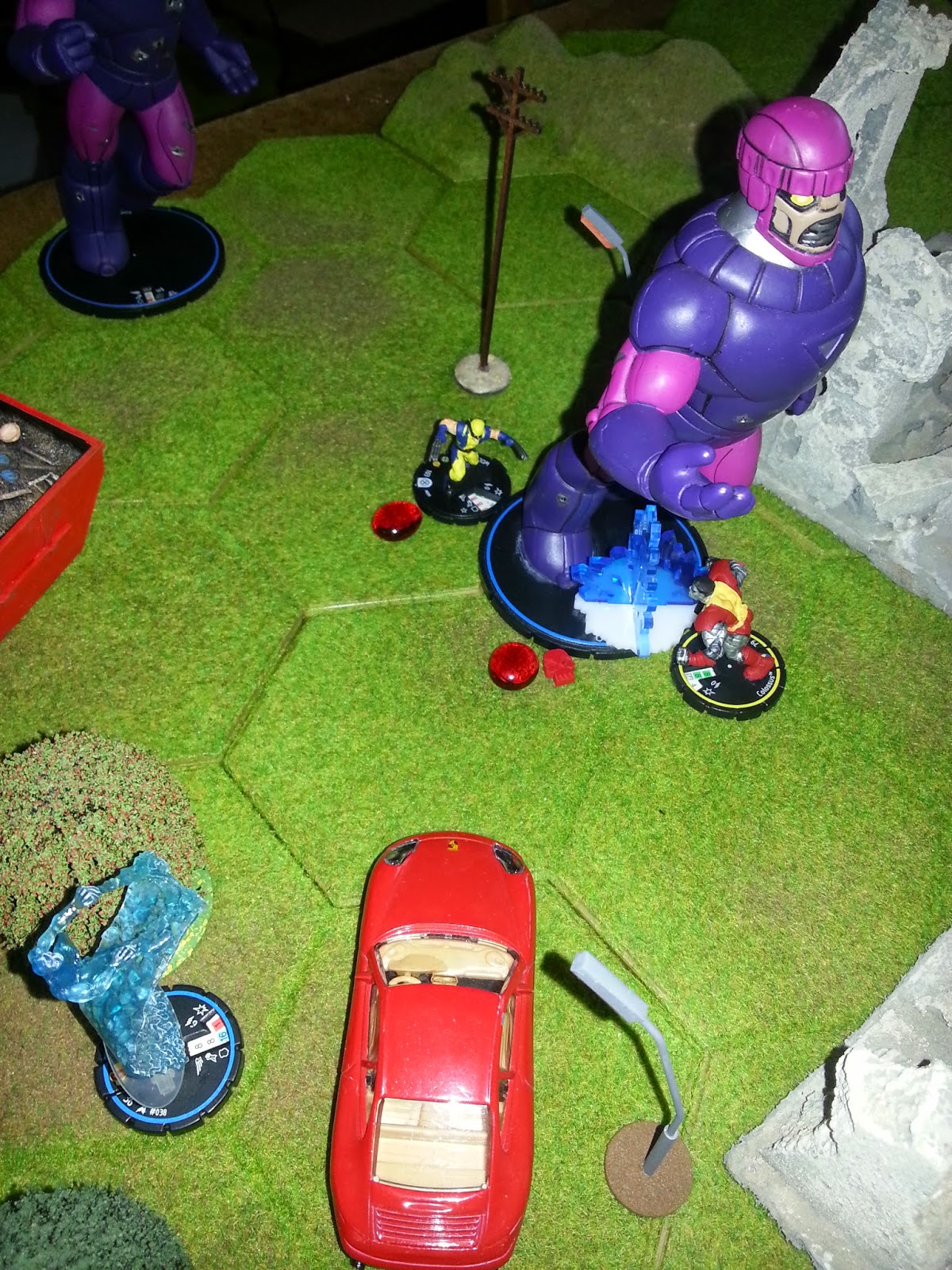 Summoning all his remaining strength Wolverine desperately rams both sets of his claws into Sentinel Beta.  His attack sends the Sentinel staggering again.  He tries to follow up but his second attack doesn’t harm the robot.

Colossus attempts to capitalise on Sentinel Beta’s discomfort but suffers a kick for his trouble.  Fortunately his heavy armour shields him from any damage.

Iceman tries to slow down Sentinel Alpha but only manages a glancing blow with his ice attack.

Sentinel Alpha flies towards Iceman, grabbing the skip Colossus had hurled earlier, throwing it at Iceman.  The skip flies past the weaving Iceman and lands somewhere behind him.

The heavily damaged Sentinel Beta’s central computer can no longer cope and shuts down with the giant robot sinking to the ground deactivated. 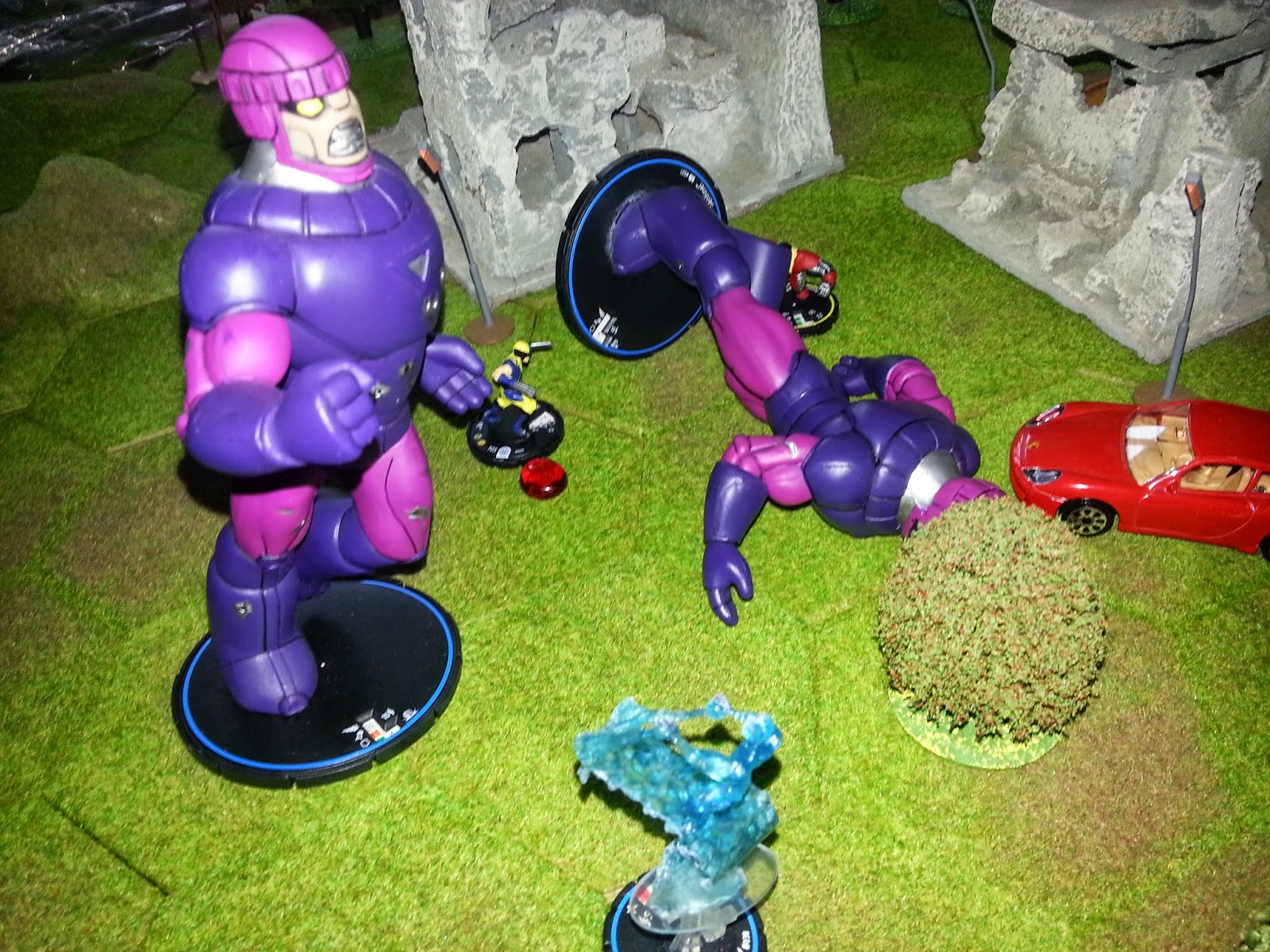 Wolverine charges the remaining Sentinel with renewed vigour.   Slashing wildly he attacks the robot causing massive damage but the Sentinel manages to avoid being Knocked out.

Taking advantage of Sentinel Alpha’s injury Iceman sprays a sheet of ice over its torso.  The robot ignores his attack.

Colossus clambers over the fallen giant and charges at Sentinel Alpha.

Sentinel Alpha waits for him to reach it and then strikes out at the armoured hero, knocking him back and into Iceman knocking him down. 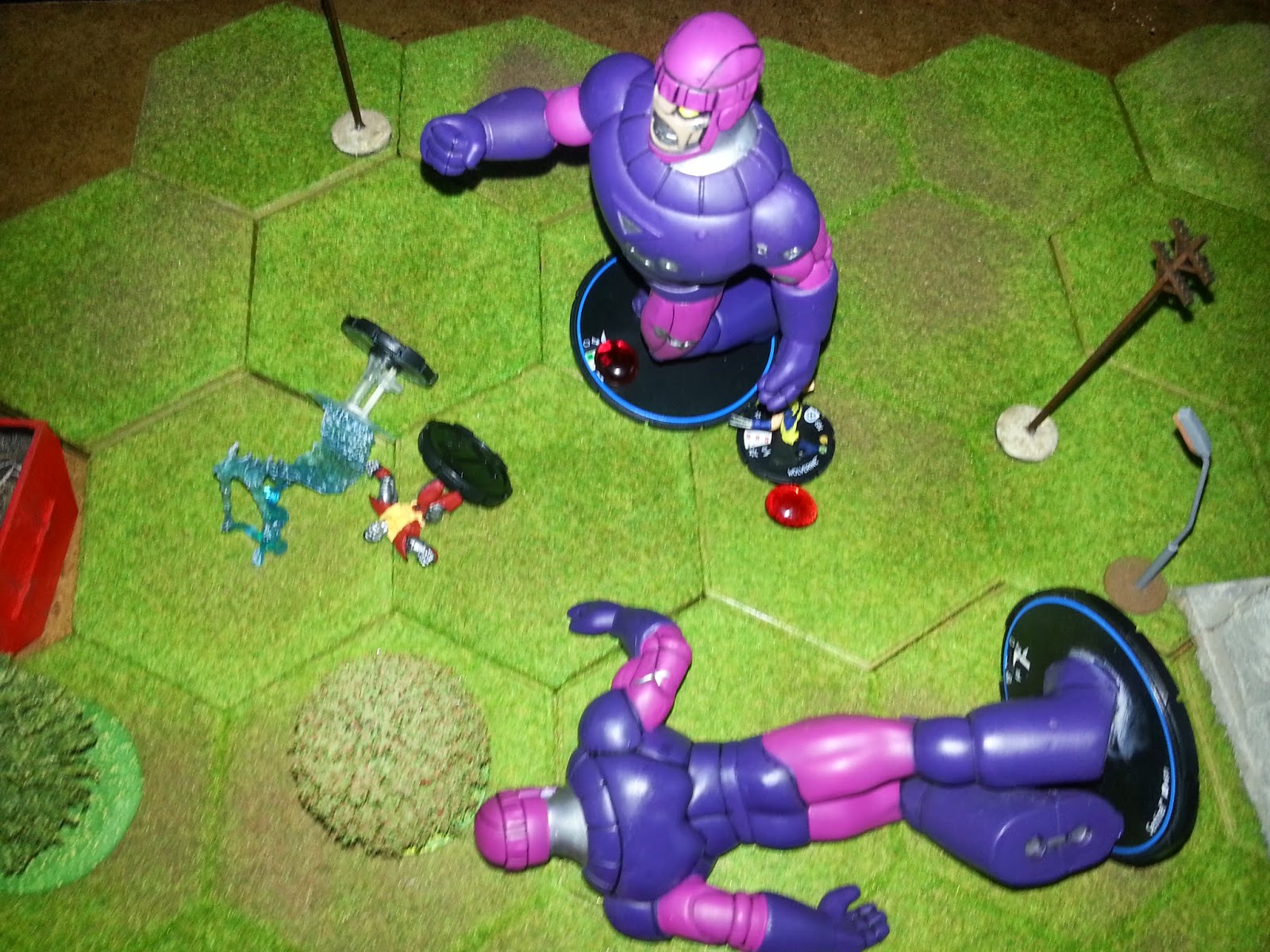 Wolverine launches a frenzied attack on the Sentinel trying desperately to protect his friends.  He sends the Sentinel staggering.

Colossus gets to his feet and moves back into contact with the robot.

Iceman does not recover as quickly and remains on the ground.

The damaged Sentinel, trying to capitalise on Iceman’s condition flies up to perform a death from above attack on the fallen hero.  Colossus and Wolverine do their best to prevent it.  Colossus misses and Wolverine’s claws scrape down the robot’s armour.  The robot kicks down on Iceman sending him flying back (and off table). 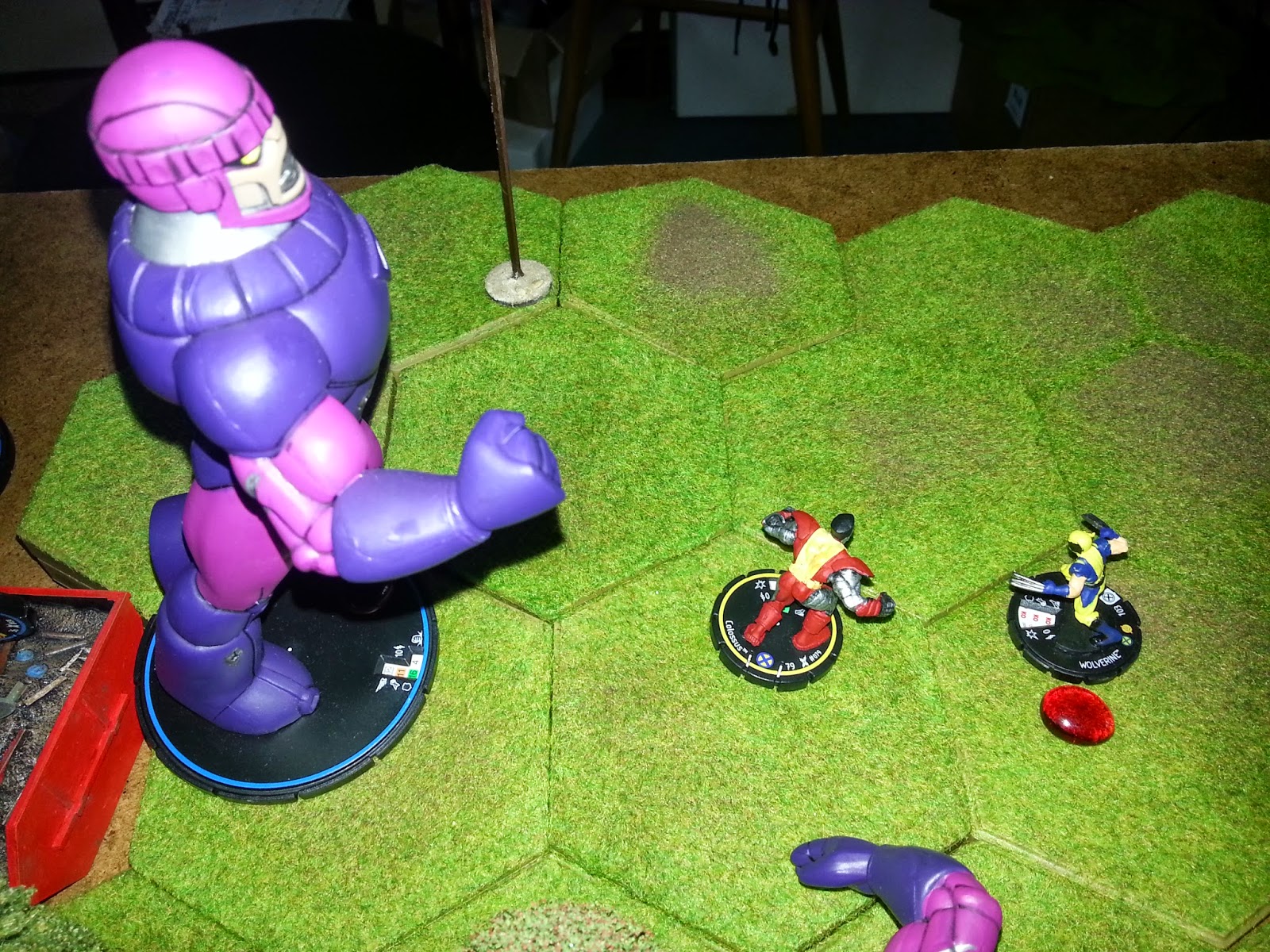 Wolverine leaps at the Sentinel looking to end the fight.  His claws strike deep sending the Sentinel staggering backwards .  Colossus moves to join his ally.

Ignoring the mounting damage Sentinel Alpha computes the optimum strategy.  It concludes a powerful attack on the wounded Wolverine and a swipe at Colossus.  Wolverine twists and slices off more of the robots armour but Colossus is caught a solid hit sending him flying backwards again and sprawling onto the ground. 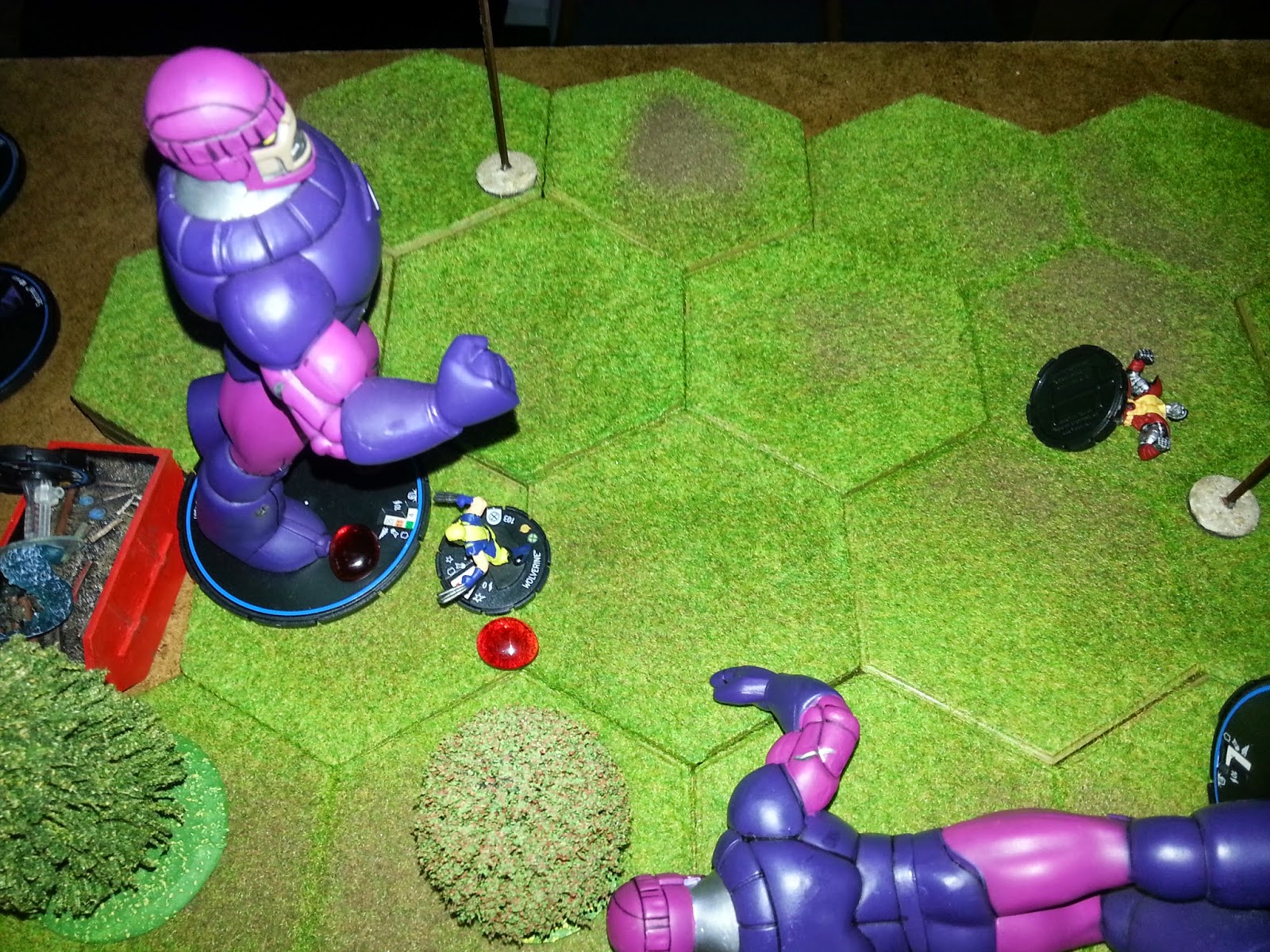 Suddenly finding himself alone against the giant, Wolverine aims to bring the towering machine down with a mighty blow.  The robot staggers backwards.  Colossus charges up knocking the Sentinel to the ground.

Iceman reappears behind the Sentinel sending a stream of ice at the fallen giant but missing the robot and only narrowly missing Wolverine.

Sentinel Alpha shakes off the damage and stamps down on Colossus.  Colossus grabs its leg and flips it back to the ground. 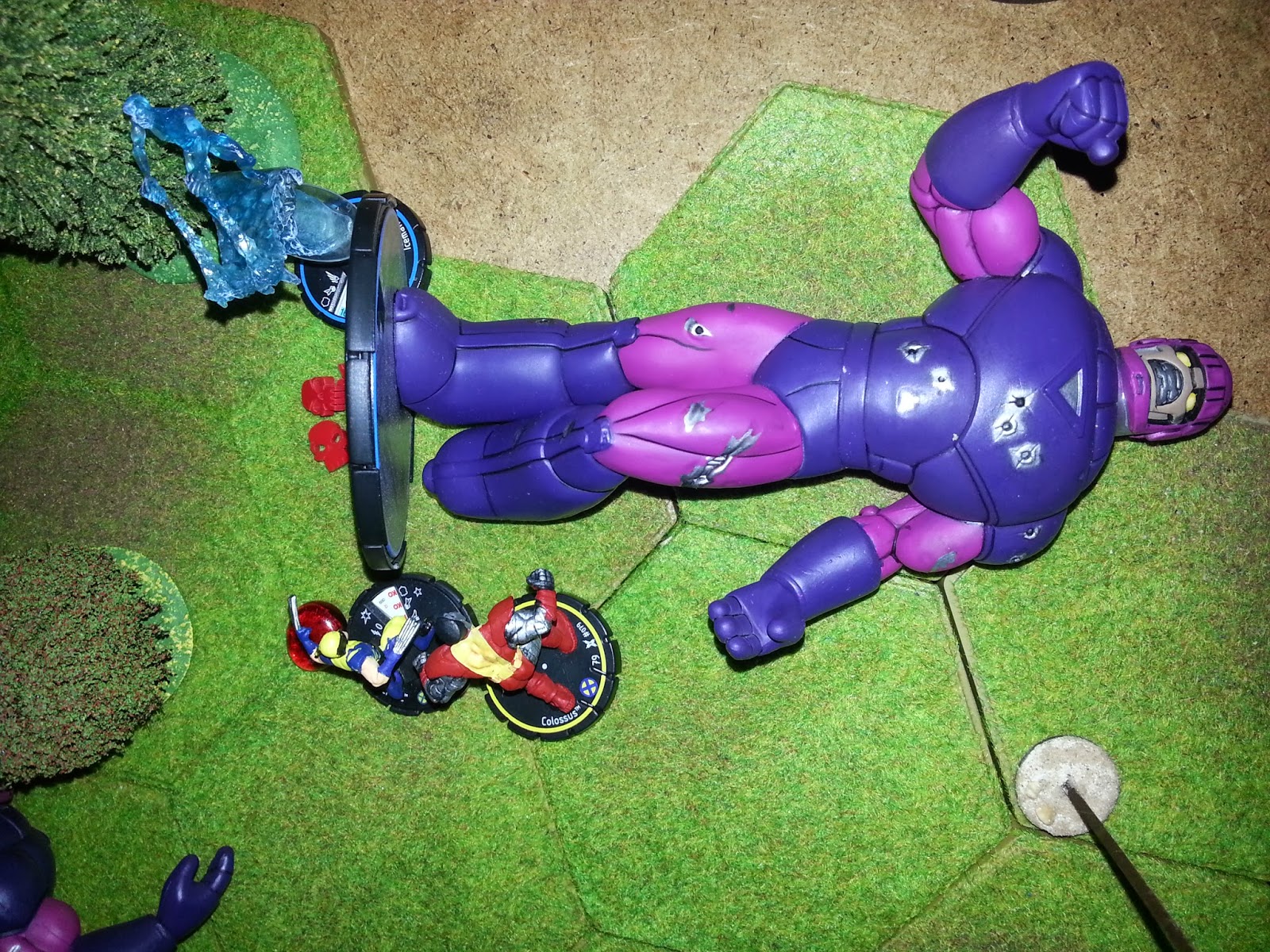 With his fury rising Wolverine slashes wildly at the fallen robot seeking out some vital area.  He finally finds one, staggering the Sentinel yet again.

Colossus tries to emulate his friend but is struck instead.  Luckily his armour soaks the damage.

Iceman who has learnt nothing from his earlier near miss on Wolverine tries to freeze the robot but fails to slow it down.


The critically damaged Sentinel Alpha finds that not even fate can save it and shuts down in a shower of sparks and smoke. 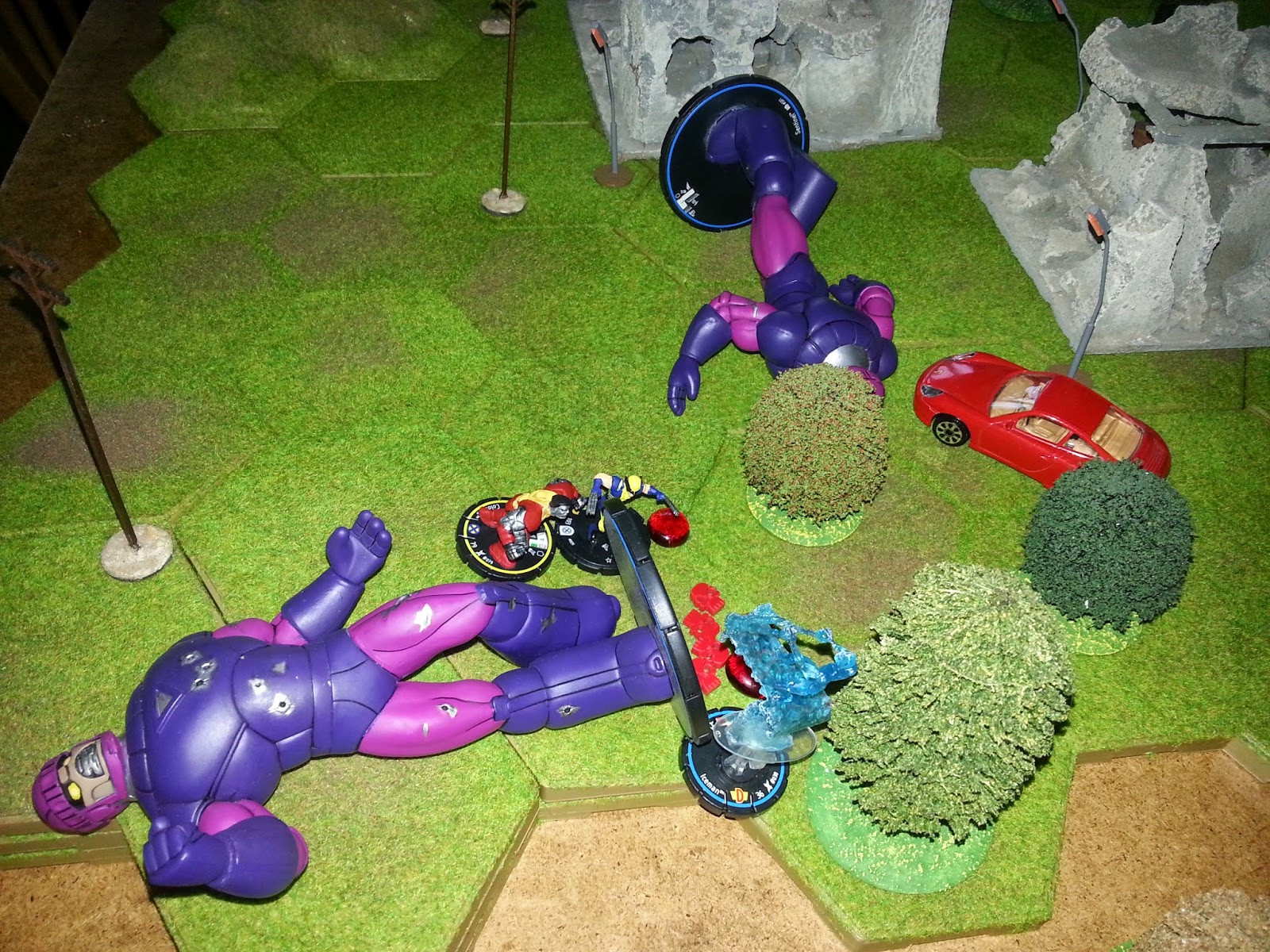 Firstly my next game should be better balanced.  I'd thought the toughness of the Sentinels would see them through but they just weren't strong enough offensively.  If I'd balanced the points and added in another Sentinel the game would have been better.

The Fastball Special attack worked especially well with Wolverine having banked an action before being thrown but in many ways it was being able to move Wolverine halfway across the board that was more important than the damage.  Wolverine pinned the Sentinel on the baseline until he chose to attack the other Sentinel from the rear.  Perhaps the fastball special damage should be the Knockout or the Strength of the thrown character plus one die type or could be its Lethal Hth Weapon plus one die type.

Armour plus a high Knockout does provide a strong defence.  Iceman's d8 attack only managed to beat the Sentinel's defence once but its ability to Slow the robot was key to the heroes win.  The rest of the damage was delivered either with a Power Blow by Colossus or by Wolverine's claws, Sentinel Alpha suffered four Staggering results by the end of the game two from Major hits.  The final KO roll for the Sentinel was a d8 versus a d10.

All in all another good game with more interaction with the terrain but Colossus could have pulled up a lamppost or telegraph pole for a sweep attack.